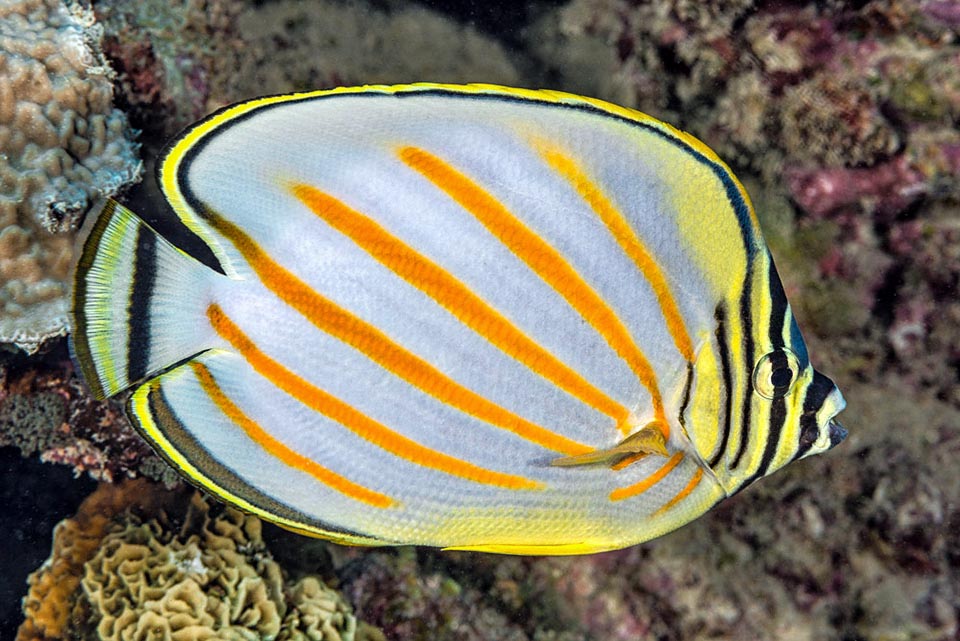 The Ornate butterflyfish (Chaetodon ornatissimus Cuvier, 1831) belongs to the class of Actinopterygii, the ray-finned fishes, to the order of the Perciformes and to the family of Chaetodontidae that presently counts (2021) 12 genera and 132 species.

These are benthopelagic animals of modest size, known as butterfly fishes due to the particularly flat body, rich of colours, and to their continuous spinning, if there is light, over the corals. At times they are mistaken with the angelfishes, not less colourful and of similar size belonging to the family of the Pomacanthidae. But these are usually much bigger, ledd flattened, and especially provided with a characteristic defensive thorn at the base of the operculum.

The name of the genus Chaetodon comes from the Greek “χαίτη” (khaite) = hair and “ὀδούς” (odous)  = tooth, for the look of teeth similar to bristles, whilst the specific epithet ornatissimus, is the Latin superlative of “ornatus”, adorned, decorated, with reference to their livery, very adorned by showy transversal bands. 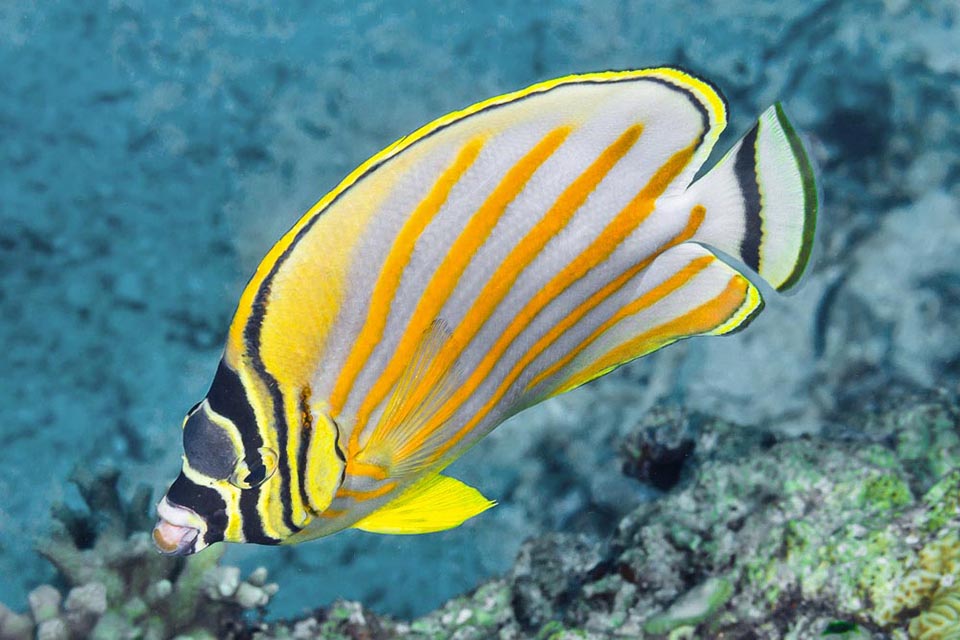 Chaetodon ornatissimus has a very vast diffusion in the tropical Indo-Pacific. Indicatively, starting from the Maldive Islands, we find it eastwards along the Indian coasts and those of Sri Lanka. Then, at the Andaman Islands and Cocos Islands and Christmas Island. Thailand, Indonesia, Australia, Papua New Guinea, New Caledonia and Lord Howe. Further north, it is present in the waters of the Philippines, Vietnam, Taiwan, China and south of Japan. 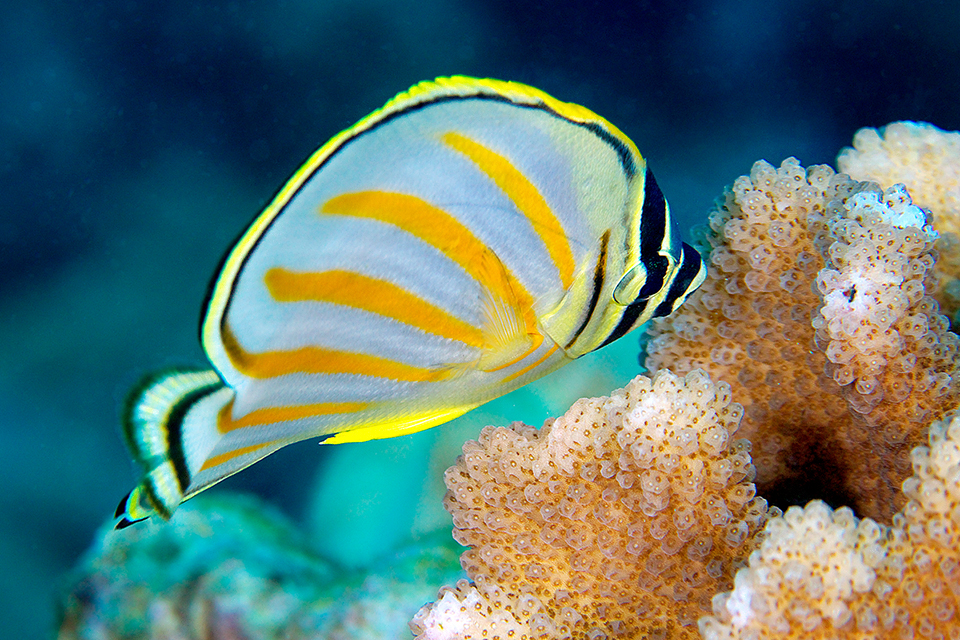 The Ornate butterflyfish lives in clear waters, relatively shallow, between 1 and 36 m of depth: lagoons, but, mostly, in overhangs on the outer side of the reef, where the madrepores it nourishes of are thriving. The juveniles, solitary, grow sheltered by those of the genus Acropora that with their prickly ramifications discourage the predators.

With its high back and little elongated snout, Chaetodon ornatissimus has an oval profile. Usually, it measures 13-18 cm with a maximum of 20 cm. 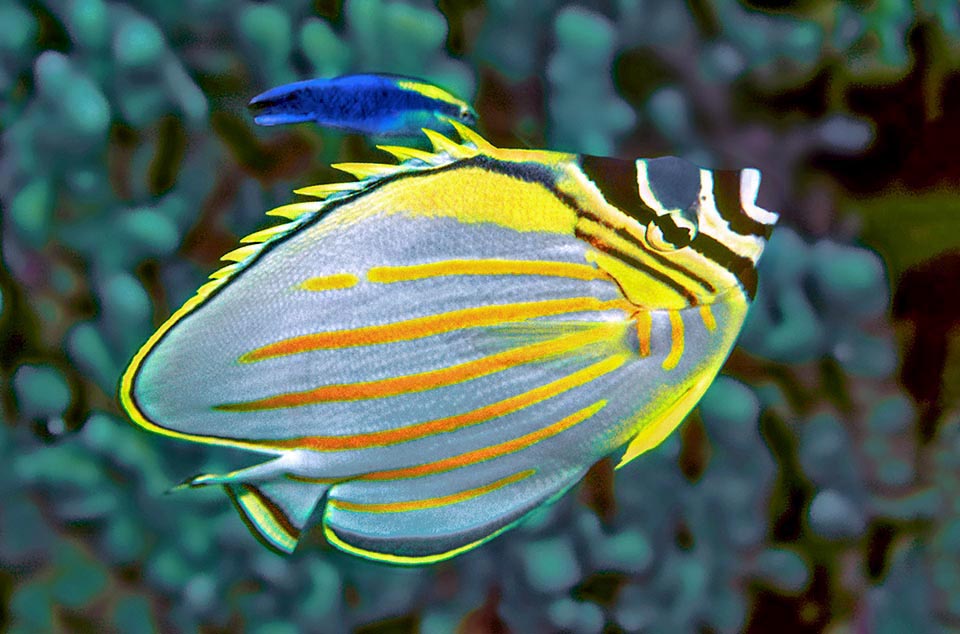 The tiny teeth, arranged like small brushes on both jaws serve to grab on the fly the polyps and the mucus of the madrepores.

The elegant livery does not display any sexual dimorphism. 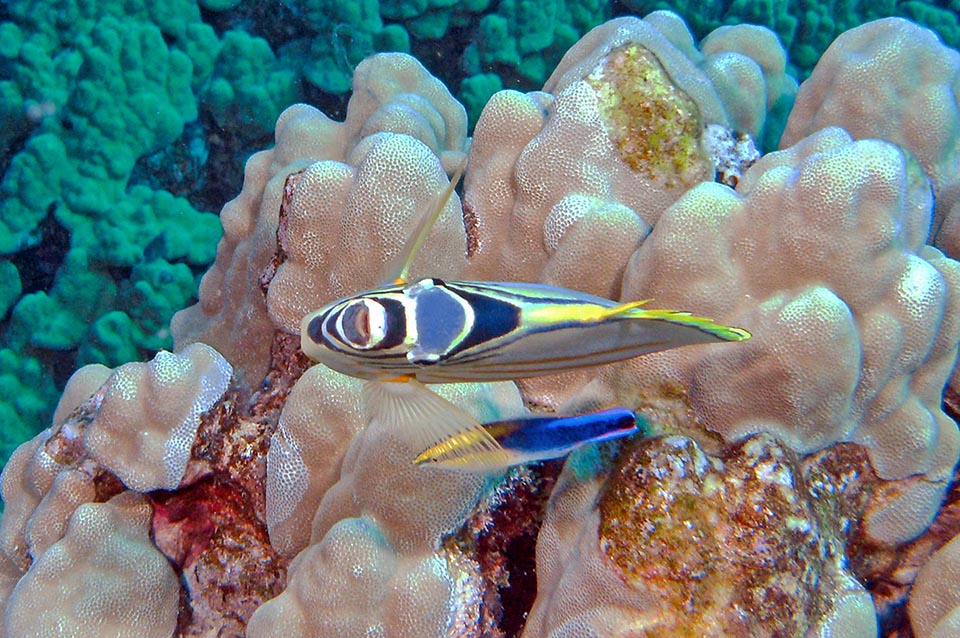 Two big vertical black bands disguise the head. One over the lip and the other on the eye, as it’s almost always the case in the butterflyfishes.

Then, parallel, follow three more black thinner mimetic bands. The first one, very thin, continues along the dorsal fin, the second crosses the operculum and the last, just hinted, stands at the end of the latter. Between the eyes stands a more or less dark saddle, sometimes bluish.

The pectoral fins are transparent and the caudal, white with black edge, has on the centre a showy black band.

The livery does not show any sexual dimorphism, but during the night gets darker. The bright orange bands tend to brown, sided by a blackish border. 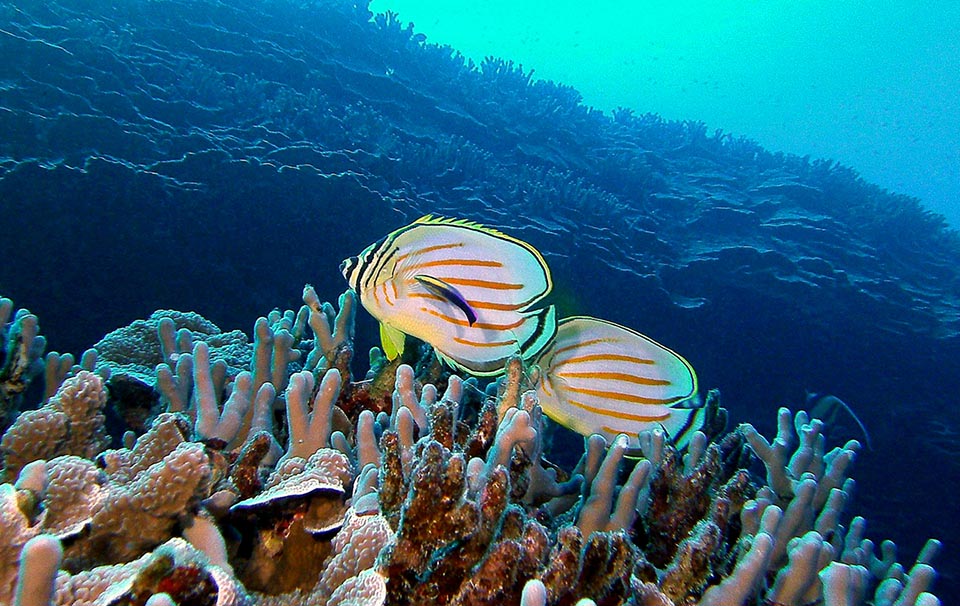 Sexual maturity is reached when two, and the adults, chosen a den, live in couple for the whole life © Barry Fackler

The Ornate butterflyfish nourish exclusively of the polyps of about ten madreporic species. More than flesh, it is often content of the mucus that covers them with some tentacle, and must do this quickly, with daring acrobatic manoeuvres, before they pull back.

The young swim solitary, but starting from the 2 years, when they reach sexual maturity, they settle choosing a den where they will live in pairs for life.

Depending on the sites, the reproduction is linked to the rain season or to the lunar cycle, events that in any case facilitate the dispersal of the eggs. In fact, on full moon nights, the tide is higher and the currents are stronger. Several couples rise to the surface to free their gametes and it is not rare, in the confusion, that some males even irrigate the eggs of other females. 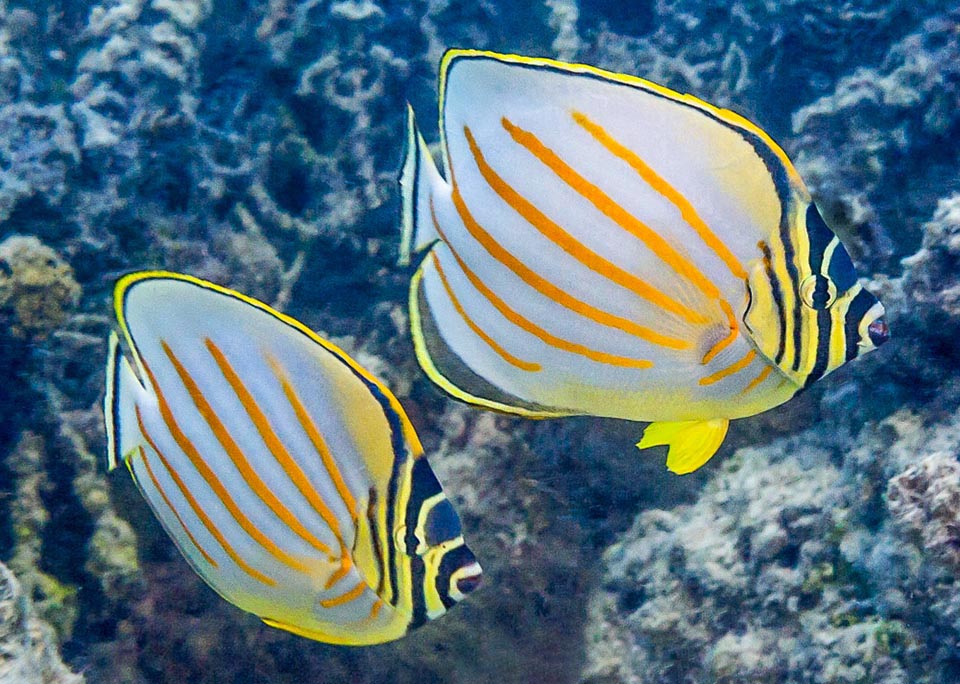 Fecundation occurs in surface, often with the full moon high tide that reinforces the currents, or with other events, such as the monsoons, having similar effects © Francois Libert

In the places where the distribution areas overlap are also possible hybrids with Chaetodon meyeri, very similar but with black oblique lines, and Chaetodon reticulatus, having a blackish body with a showy white dotting.

The eggs, dragged by the waves, hatch the next day and the pelagic larvae go adrift for a couple of months, characterized by bony plates that protect the head and the front part of the body.

They eat plankton and only in a following stage, when they reach the 12-15 mm, they go close to the bottoms in often very far reefs.

The young, with a livery like that of the adults, proportionally have a more rounded shape. 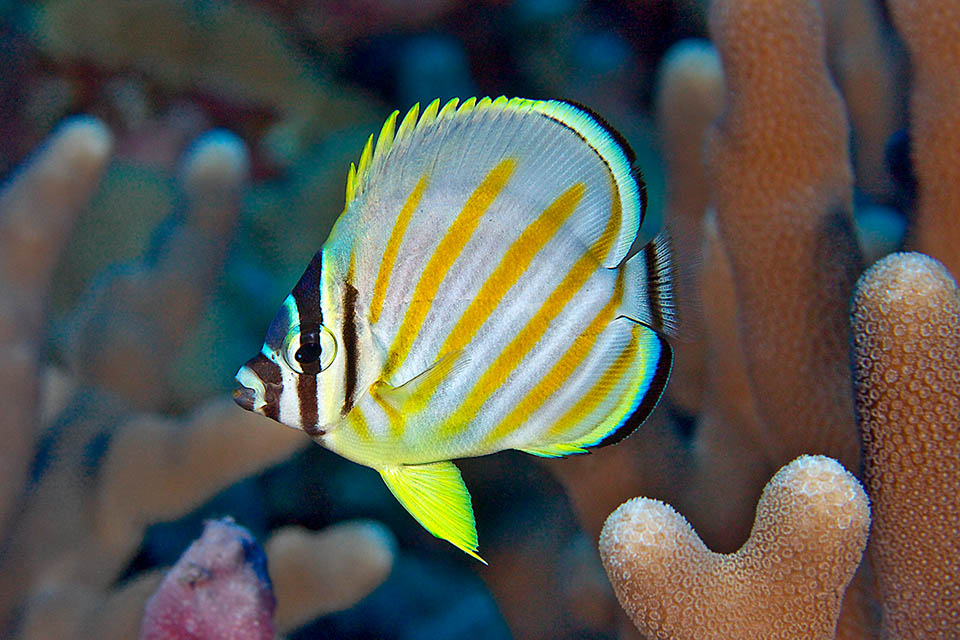 The young profile is more roundish than adults. They grow solitary, among the genus Acropora madrepores, with often stinging ramifications that deter predators © Keoki Stender

Because of its beauty, Chaetodon ornatissimus is sometimes sold unscrupulously as aquarium fish, knowing well that it is practically impossible to feed it.

It is true that in theory it has a good resilience, the possible doubling of the populations being less than 15 months and a vulnerability index nowadays very low, steady at 15 on a scale of 100, but reflecting on the massive death of the corals linked to the climate changes and to the human activities, at a certain point these fishes will have no more food resources and no more “kindergartens” for the children. It has already been noted that where the reef is dying, this species is in sharp decline.