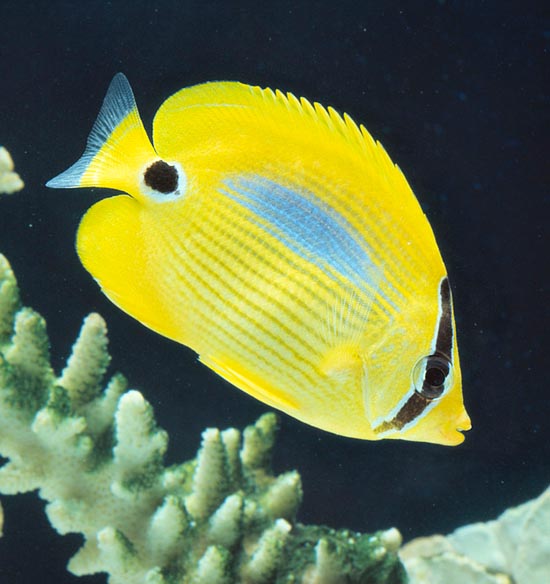 The Blueblotch butterflyfish (Chaetodon plebeius Cuvier, 1831) belongs to the class of the Actinopterygii, the ray-finned fishes, to the order of Perciformes and to the colourful family of the Chaetodontidae.

The name of the species plebeius means in Latin “plebeian”: that part of the Roman people, opposed to the patricians, who did not enjoy all the rights and having humble tasks. Maybe this name has been given because it is very common, due to its modest size and the habit it has of cleaning the other fishes from the parasites.

We manly find it in the tropical waters of the Pacific Ocean, but also in some areas of the Indian Ocean, for instance at the Maldives, in Sri Lanka and in Thailand. It is at home in Australia, Indonesia, New Guinea, New Caledonia, Philippines, China and Taiwan up to southern Japan. Eastwards, it reaches the Fiji and Tonga islands, southwards Norfolk Island, Lord Howe Island and Easter Island.

It lives in shallow waters and along the borders of the reefs, among the madrepores rich of ramifications and caches, up to 10 m of depth.

The overall colour is yellow, with longitudinal striae and a typical light blue dot stretched in the upper part of the body. 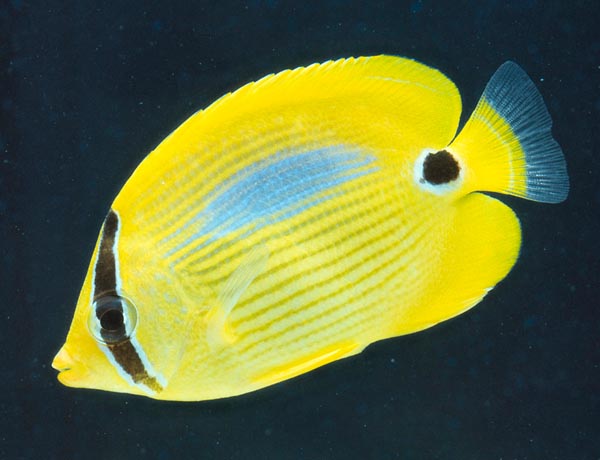 Then, there is a black spot on the caudal peduncle, edged of paler blue, like that close to the vertical band hiding the eye.

The alimentation is carnivorous, with a diet based on the polyps of the Pocillopora damicornis, but also on other cnidarians and small organisms, for instance, the ectoparasites which it often seizes, such as the Labroides dimidiatus on the other fishes.

It lives solitary or paired, especially during the reproductive period. After the fecundation, the eggs are entrusted to the currents.

The populations can double in less than 15 months, and, apart the aquaria trade, it is not chased by the man because it does not have any value as food. It is true that the continuous global warming, by destroying the corals, could be a serious element of risk, but the Pocillopora damicornis has proved to be one of the most resistant madrepores and therefore, even nowadays, the vulnerability index of the species is very low: 13 per 100.