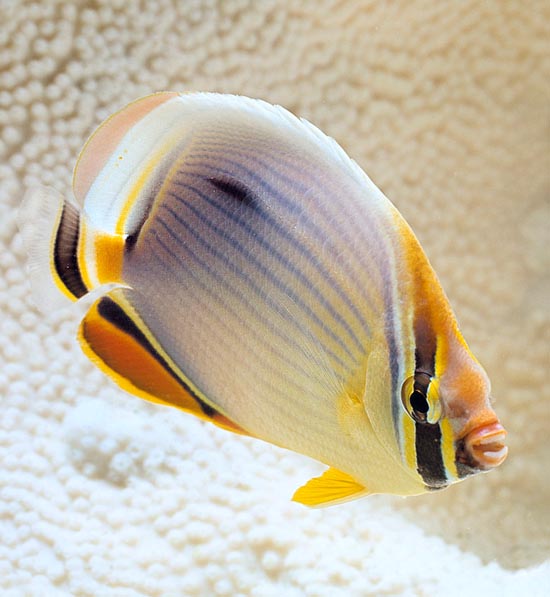 The Melon butterflyfish (Chaetodon trifasciatus Park, 1797), belongs to the class of the Actinopterygii, the ray-finned fishes, to the order of Perciformes and to the family of Chaetodontidae.

The name of the species trifasciatus means, in Latin, “with three bands”, with reference to the 3 dark bands on the head.

It a very vast distribution, the melon butterflyfish is maybe the most common species of the genus Chaetodon. We find it in the Indian Ocean, from South Africa and Madagascar up to Yemen, India, Sri Lanka, Indonesia and Australia, and then in the Pacific, northwards up to southern Japan and eastwards up to the Hawaii and the Tuamotu Archipelago.

It lives in the shallow water of the madreporic formations, without exceeding the 20 m of depth.

The first of the three dark bands giving the name to the species is little evident, wide but short, it is placed on the tip of the snout under the mouth; the second, the most visible, crosses, as often is the case, the eye, sided by two yellow bands; and the third one, thin and a little paler than the others, starts from the dorsal up to the base of the operculum.

There are then, on the yellow-silvery background colour, about twenty horizontal lines. The fifth shows, in the second half of the body, a thicker dark zone 1 cm long. The caudal peduncle is orange, like the anal fin which ends with a yellow band, whilst above stands a black band, sided by a yellow one, which reminds dark vertical band with yellow border which delimits the end of the body, from the base of the soft rays of the dorsal to the caudal peduncle. The caudal fin begins with the colour of the peduncle, then detaches on the white, then has a showy black band edged of yellow and finally becomes translucent. Some white is present in the spiny rays of the dorsal fin and in the lower part of the soft rays.

It is a typically corallivore fish, which nourishes mainly of the madrepores of the genus Pocillopora. When in aquarium, it quickly dies of hunger or poisoned by other species of corals present in the pool which it is not able to digest.

Seen that is of no alimentary value, that it is not pursued by the aquaria lovers and that the populations can double in less than 15 months, the melon butterflyfish has an unbelievably low vulnerability index: just the 10 per 100.