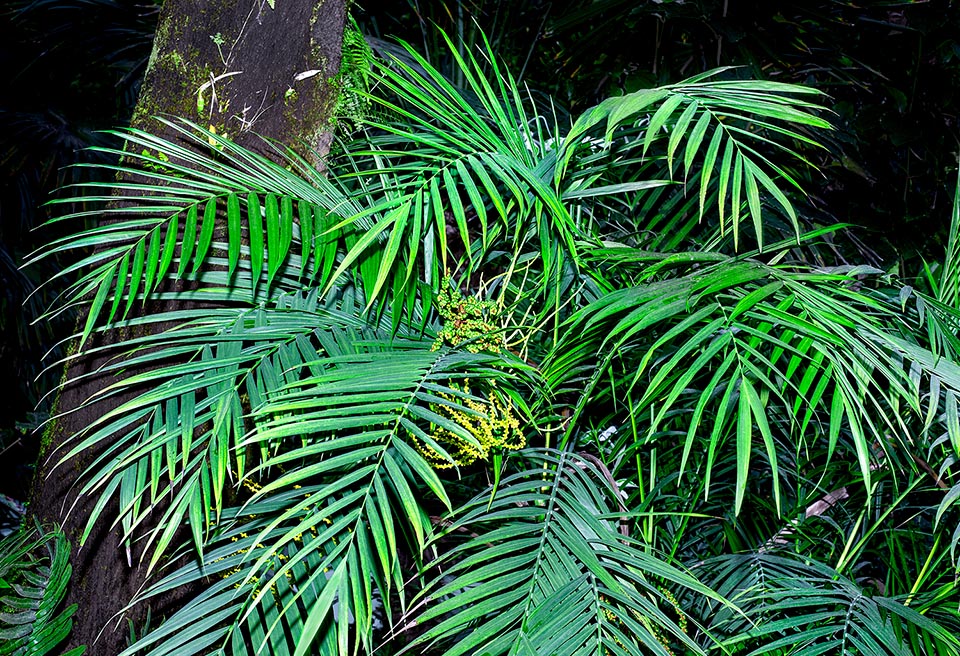 Chamaedorea hooperiana Hodel is native to the undergrowth of the rainforest in the Province of Veracruz in Mexico, where it grows at 1000-1500 m of altitude.

The genus Chamaedorea has been established in 1806 by the German botanist Carl Ludwig Willdenow (1765-1812) who, however, has not described the meaning of the name.

Presently it is hypothesized that it is coming from the combination of the Greek terms “χᾰμαι” (chamoi) = on the ground, and “δόρυ” (dóry)  = spear, with reference to the often modest size and to the thin and slender stems. Others do associate it to the Greek term “δῶρον” (doron) = present.

The name of the species hooperiana, honours the collector of American palms Lou Hopper, who has cultivated this species in his garden in California before the rediscovery of the site of origin in Mexico in 1989. 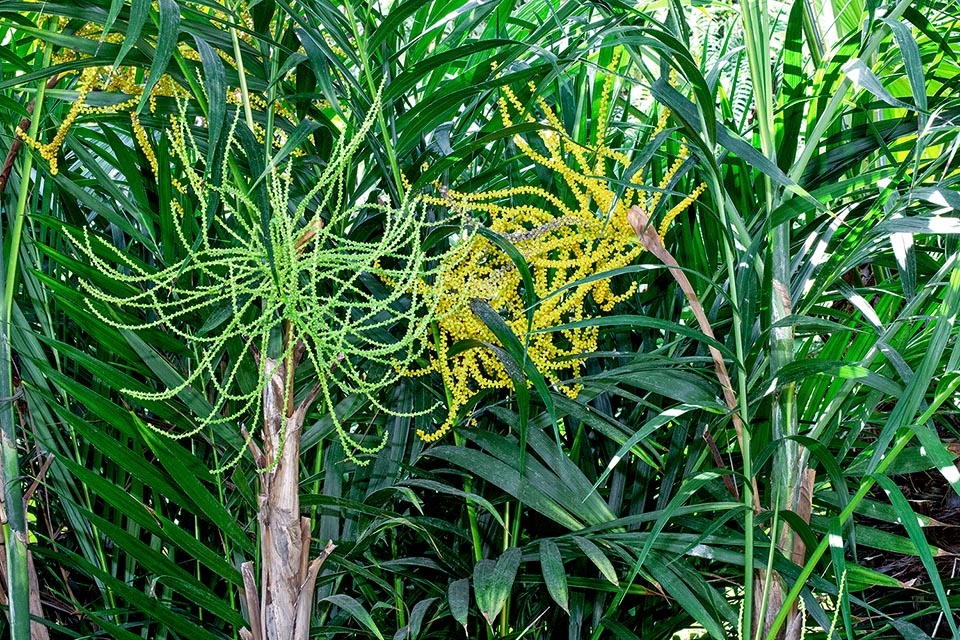 Chamaedorea hooperiana is a dioecious, multi stemmed species forming great tufts up to 5 m tall and up to 3 m broad, formed by thin stems, similar to bamboo canes, with an up to 2,5 cm diameter, of dark green colour, marked by grey rings in correspondence to the fallen leaves, about 15 cm spaced from each other. From the basal rings of the oldest stems emerge short aerial roots having the function of stabilizing the plant. The stem is often covered by fibres originated from the decay of the basal sheaths of the fallen leaves that persist for a long time. The outermost stems of the shrub tend to bend downwards.

The foliar crown is sparse, at most composed by 7 dark green pinnate leaves, up to 1 m long, on up to 35 cm long petioles. The leaves emerge erect and then become arcuate and longly drooping. The pinnulae, 20-26 per each side of the rachis, are opposite, lanceolate, with pointed apex. Coriaceous, spaced, they reach the 40 cm and have a breadth of about 2 cm. The lowest and the central are longer than the apical ones.

The petioles, of a bright green colour with a yellow central band on the lowest side, end in a sheath wrapping the trunk, obliquely open at the apex. It is whitish green, up to 50 cm long, with darker longitudinal veins and brown and rough margins. 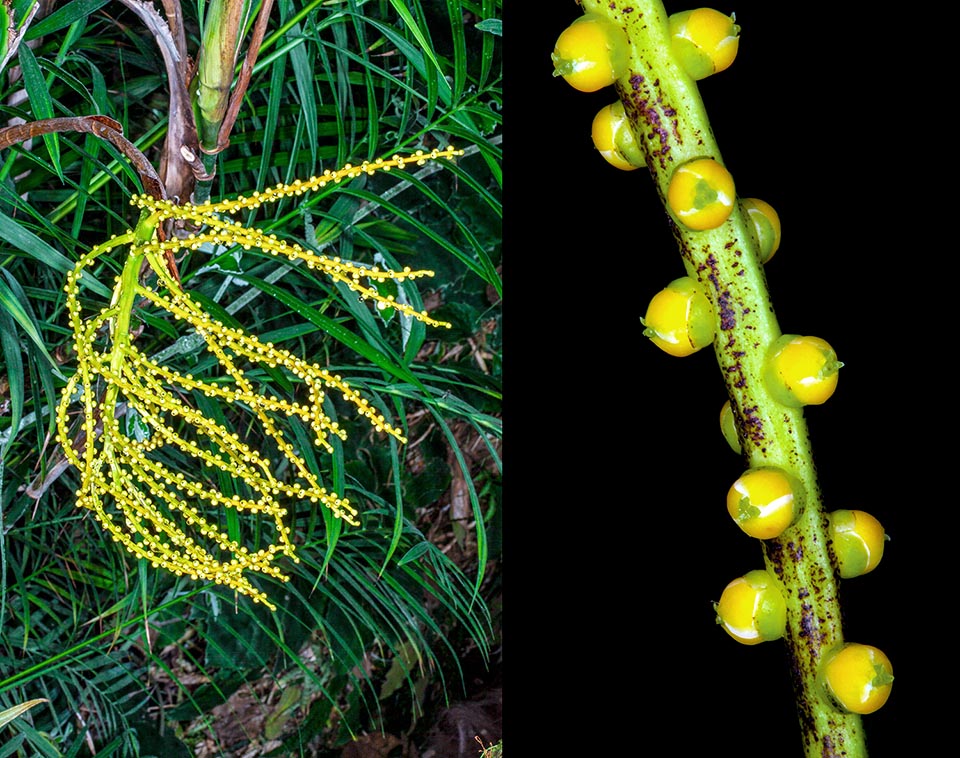 The inflorescences are interfoliar, erect and very ramified. They emerge among the fibres of the old sheaths of the stem. The male ones have a pale green, up to 30 cm long, peduncle that continues in the rachis, up to 20 cm long, ramified with 40-45 drooping rachillae having the same colour, up to 25 cm long and with a diametre of about 2 mm. The male flowers are bright yellow, strongly scented, arranged in dense spirals.

In the female inflorescences the peduncle reaches the 50 cm, initially pale green, then red orange with the fruits ripening. The rachis is up to 22 cm long, ramified in 40 rachillae, slightly diverging and drooping, the lowest ones up to 22 cm, the apical ones up to 10 cm long, of similar colour. The female flowers, green-yellowish, are spaced apart, also spirally arranged. The fruits, when ripe, are globose elliptic, with a diametre of 7-8 mm.

Chamaedorea hooperiana is quite similar to the congeneric Chamaedorea pochutlensis, from which distinguishes because of the new stems that are emerging under the old foliar sheaths persisting at the base of the plant and the thicker and coriaceous leaves, with thin and spaced pinnulae and the stems originating from the rhizome at a certain distance from the mother plant. The male flowers furthermore display petals widening apically. 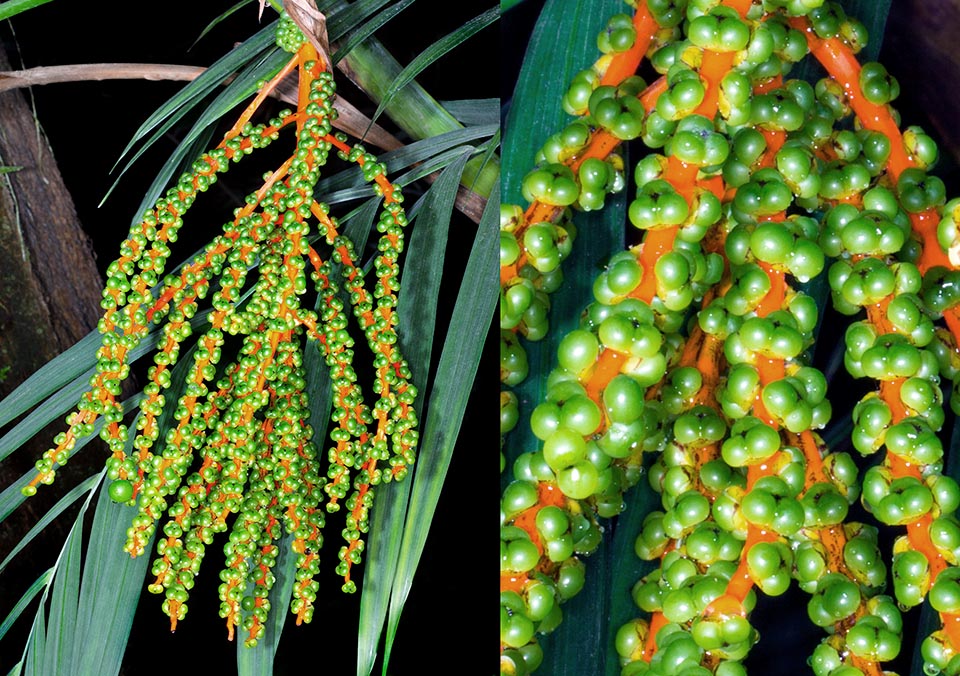 Chamaedorea hooperiana is considered as one of the most beautiful of the genus and also one of the easiest to cultivate. Until the late nineties, it was considered rare and visible only in private collections, now it is pretty easy to be found on the market. It can be grown in an ample range of climates, from the tropical to the temperate one, where it can stand, for short periods, even the -4 °C.

It is a species preferring the shady positions, especially when young, but in Mexico, during a repopulation of areas deforested by the agriculture, it has been noted that it grows faster with a partial shading. It has no preferences regarding the composition of the ground, but loves a well drained, constantly humid, substratum. It is one of the few species of the genus capable of standing short periods of drought.

Chamaedorea hooperiana forms dense shrubs and its final dimensions should be kept in mind when implanting it, because with the age it will occupy considerable room.

This species is ideal for the cultivation in pots in inner spaces because of its low light tolerance, low humidity and also due to its resistance to parasites, such as mites and red spiders (Tetranychus urticae).