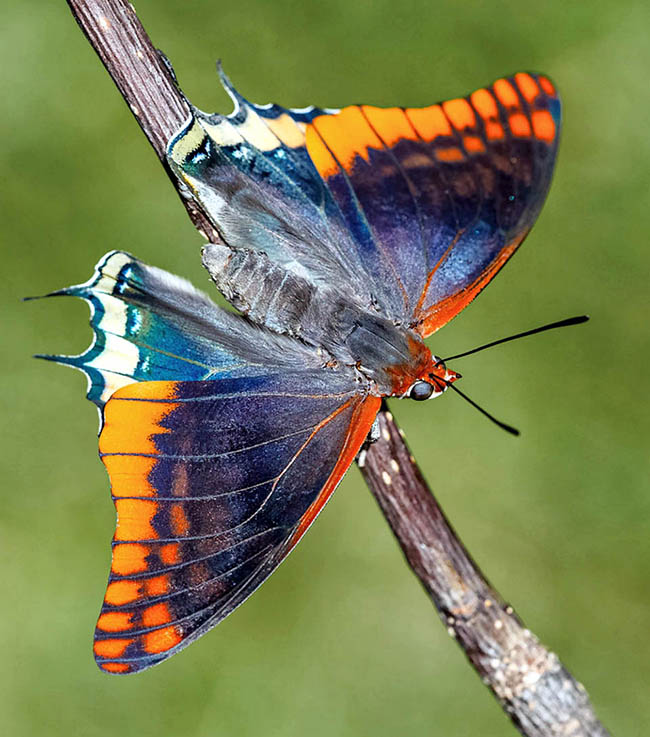 With 7-8 cm of wingspan in the males and 8-9 cm in the females, the multicoloured Two-tailed pasha (Charaxes jasius) is very diffused with several subspecies in sub-Saharan Africa and along the Mediterranean Basin coasts © Adam Gor

The Two-tailed pasha (Charaxes jasius (Linnaeus, 1767)) is the only Lepidopteran of the genus Charaxes, afferent to the family Nymphalidae, present in Europe.

Described by Linnaeus in 1767 as Papilio jasius, it has been transferred to the genus Charaxes, instituted by Ochsenheimer in 1816, where more than two hundred African species are included.

The generic name Charaxes comes from the old Greek “charaxis”, that means to scratch and to incise, but also incised and delimited space.

By doing this the Author has wanted to highlight the main characteristics of the adults: the aggressiveness and the well-defined drawing of the wings.

The specific epithet jasius refers to the combativeness of the adults that emulate that of the brave hero Jason who went looking for the Golden Fleece in Colchis.

The Two-tailed pasha is diffused in sub-Saharan Africa and along the coast of the Mediterranean Basin where it should have arrived starting from the Iberian Peninsula.

In Europe it is present from the coastline from Portugal to Greece and to Anatolia coast. Its distribution range includes the islands of Samos, Ikaria, Kerkyra, Crete and Rhodos as well as the Balearic Islands, Corsica, Sardinia, and Sicily. It is locally present in Spain in Galicia and from Huelva and Malaga up to Madrid and Salamanca. In France, it is found in Provence and in some locations on the Atlantic coast.

Numerous subspecies have differentiated in its extensive diffusion area. 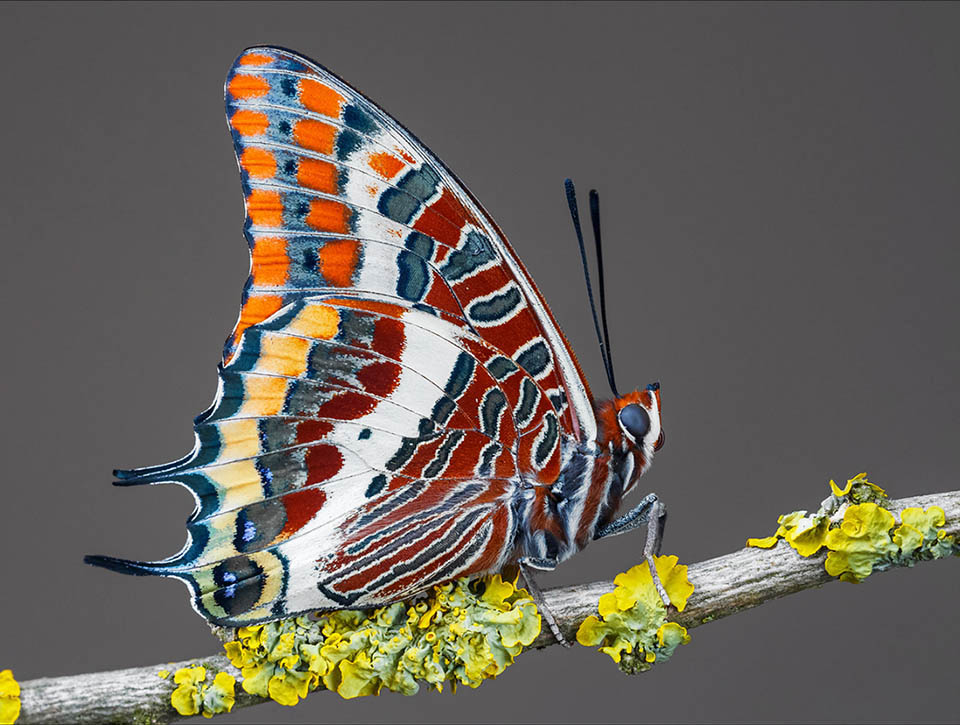 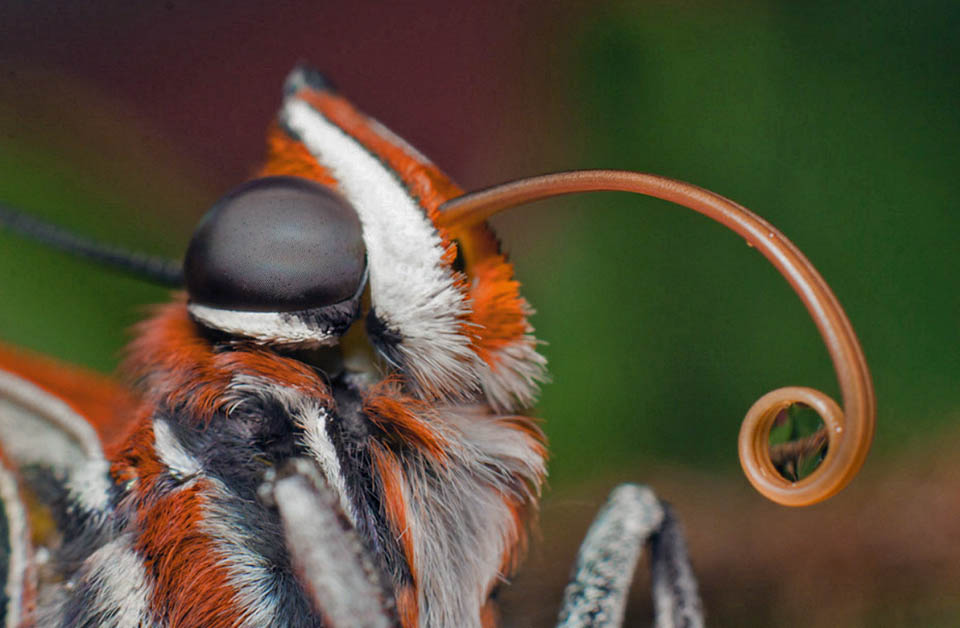 In the northernmost area of diffusion, the typical habitat of the lepidopteran is that of the Mediterranean scrub where the Strawberry tree (Arbutus unedo) lives and reproduces up to 700-800 m of altitude.

In many areas of the Mediterranean Basin where, during the last century, the scrub has been destroyed to make room for the citrus groves, the Two-tailed pasha has adapted to live in such new habitats. The larvae nourish of the leaves of the citruses causing erosions that do not cause damages to the plants such to exceed the threshold of attention of the citruses growers but ensure the survival of the species even in environments quite different from the original ones and seemingly unfriendly, as evidence of adaptability and resilience of the species. 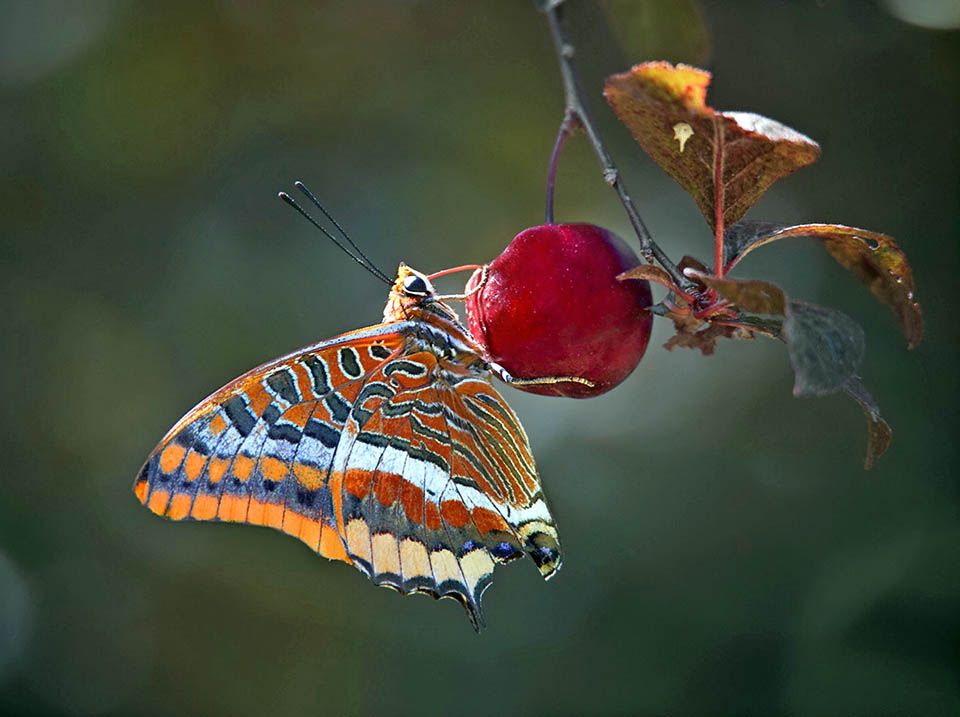 Here getting intoxicated by sucking the alcohol produced by a rotting wild prune. Between branches the showy wings colour is actually mimetic © Carlos Santos

The adults have medium to large body size, with a wingspan varying from 7-8 cm of the males to 8-9 cm of the females.

The forewings have the margin slightly curved, whilst in the hind ones the outer border is rounded and present two eye-catching codicles that recall those of the Papilionidae.

The upper surface of the forewings is of velvety brown colour with the margin crossed by a yellow orange band, followed by a thin yellow stripe formed by a series of small specks. 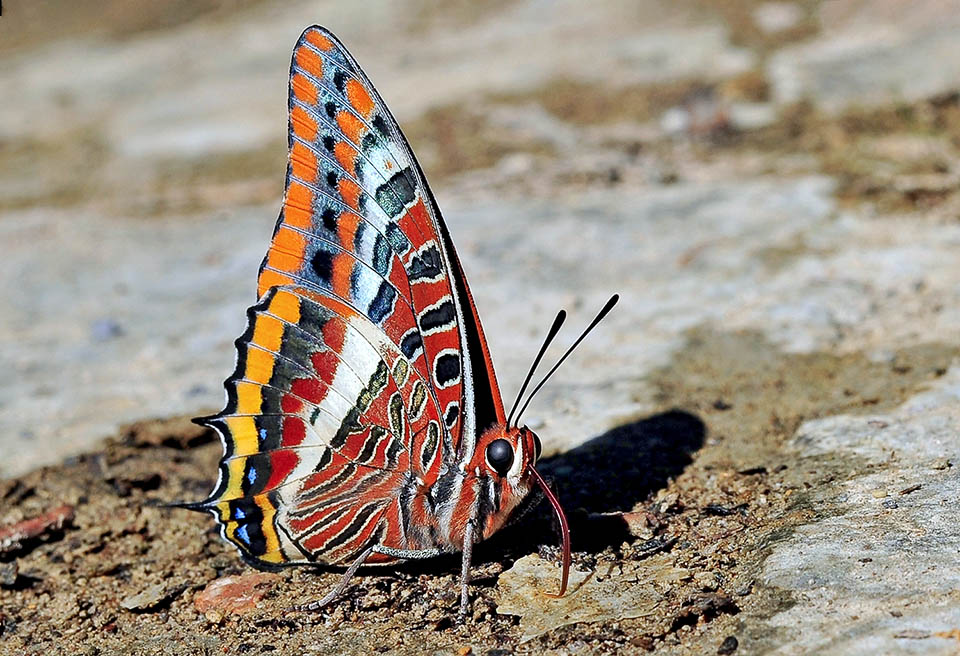 The lower surface is reddish brown with thin variegations, white, white and yellowish bands and black and violet ocellar spots.

The hindwings have black margin with a wide parallel yellow band partially accompanied by semilunar light blue spots. The third median nervation and the second cubital are elongated and protrude from the alar margin in characteristic extensions, called codicles present in most species of this genus.

The ventral part of the wings is of reddish brown colour with several darker bands outlined in white or grey. The orange marginal band is preceded by a submedian white band. Close to the codicles are present some light blue points. 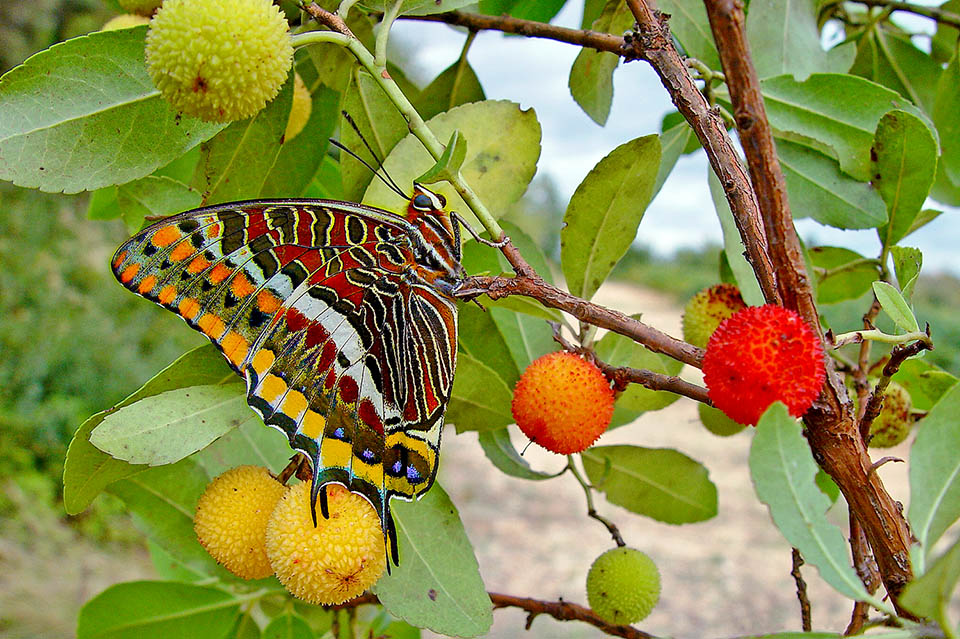 However, the sweet fermented fruits of the strawberry tree remain his favorite and it is here that he often mates and lays © Heinz Rothacher 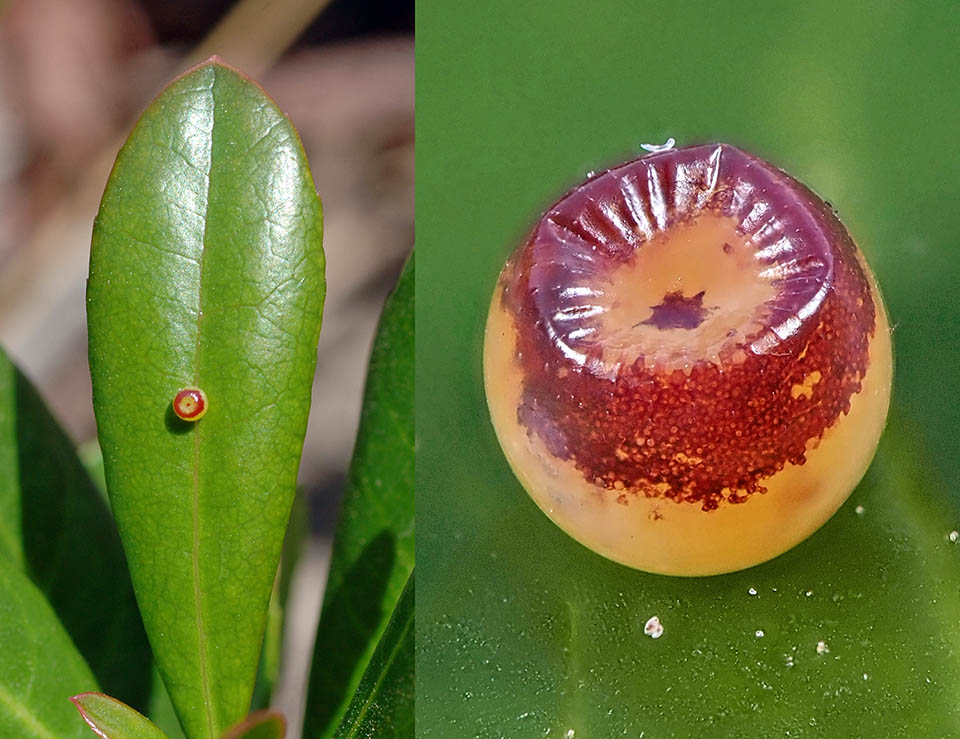 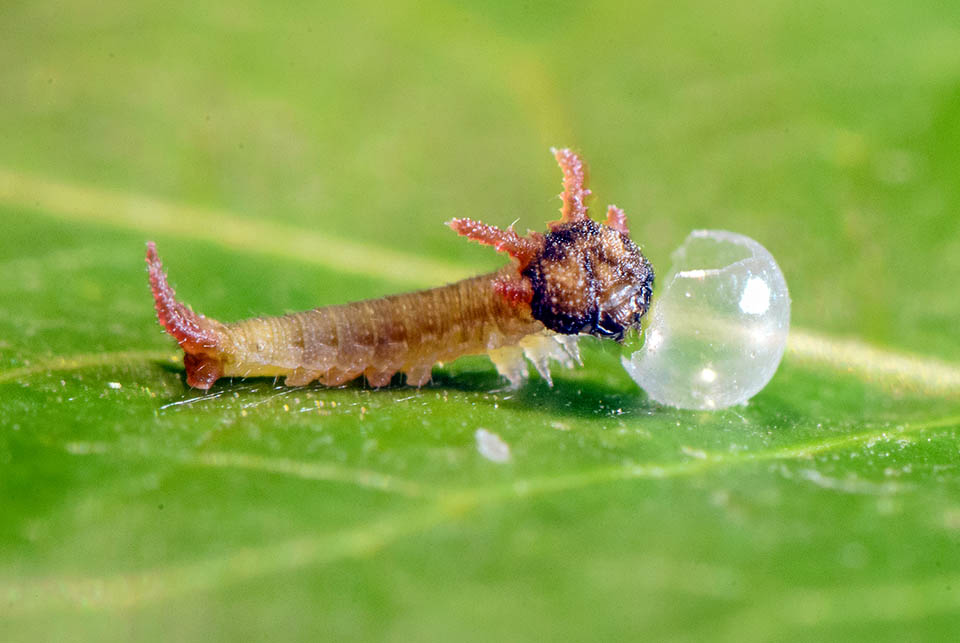 The incubation lasts eight to twelve days. The just born caterpillar eats its shell which us its first meal © Paco Moreno Gámez

The egg is spheroidal of marbled yellow colour with rib-like reliefs and longitudinal striae in the apical zone, connected by transversal striae and surmounted by small punctiform prominences.

The larva, eruciform, just shelled from the egg is greyish with black head.

In the later ages it is of pale green colour with a yellow line on the sides and several white granules all over the surface of the tegument, the ventral surface is white-greenish. The body is enlarged in the median part and thinned at the back with the last segment bifid. 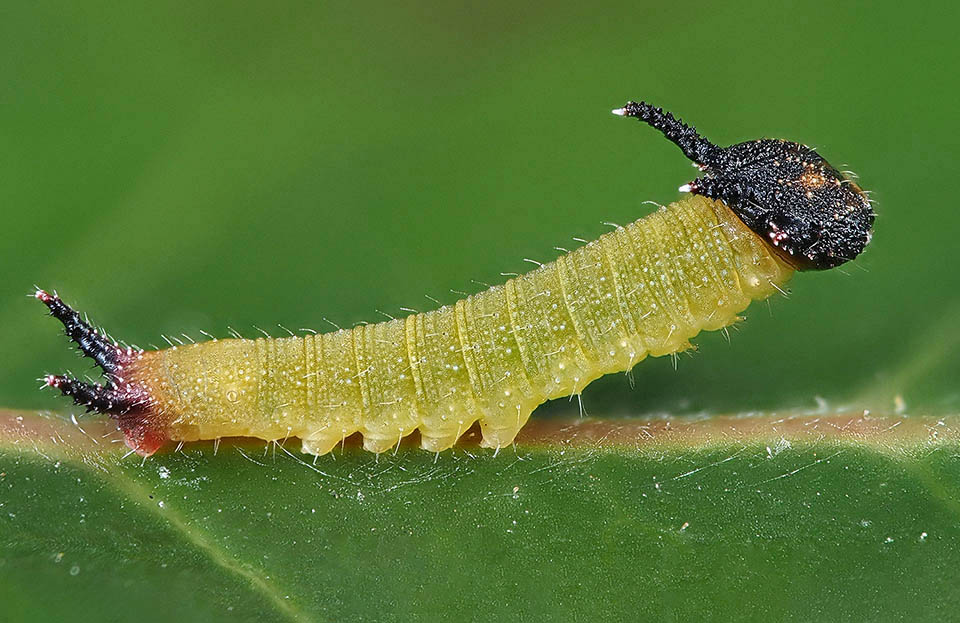 Then it begins chewing the leaves. The head and the horns turn black © Gilles San Martin

In the dorsal part of the third and fifth abdominal segment are present two ocellar light blue spots edged in yellow. The head is big with prominent mandibles and is adorned by four characteristic corniform processes of green and red colour. 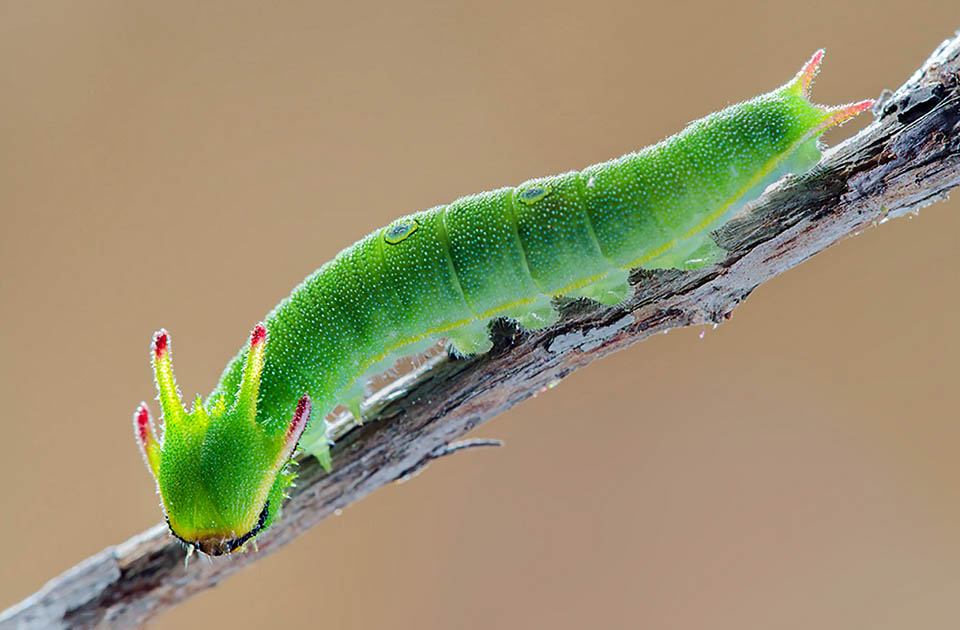 Caterpillars are polyphagous with various host plants. On the arbutus they do 5 moults, but on the citruses, less nutritive, 6. Here the head bumps begin to get red © José Antonio Gómez Vázquez

It is a species with a marked territoriality: during the reproductive period the males defend and patrol a very large territory, displaying a remarkable aggressiveness towards the intruders.

Usually they fly at relatively high altitudes and glide to land on plants for sucking the liquids dripping from the ripe fruits and especially from those where the alcoholic fermentation has begun. 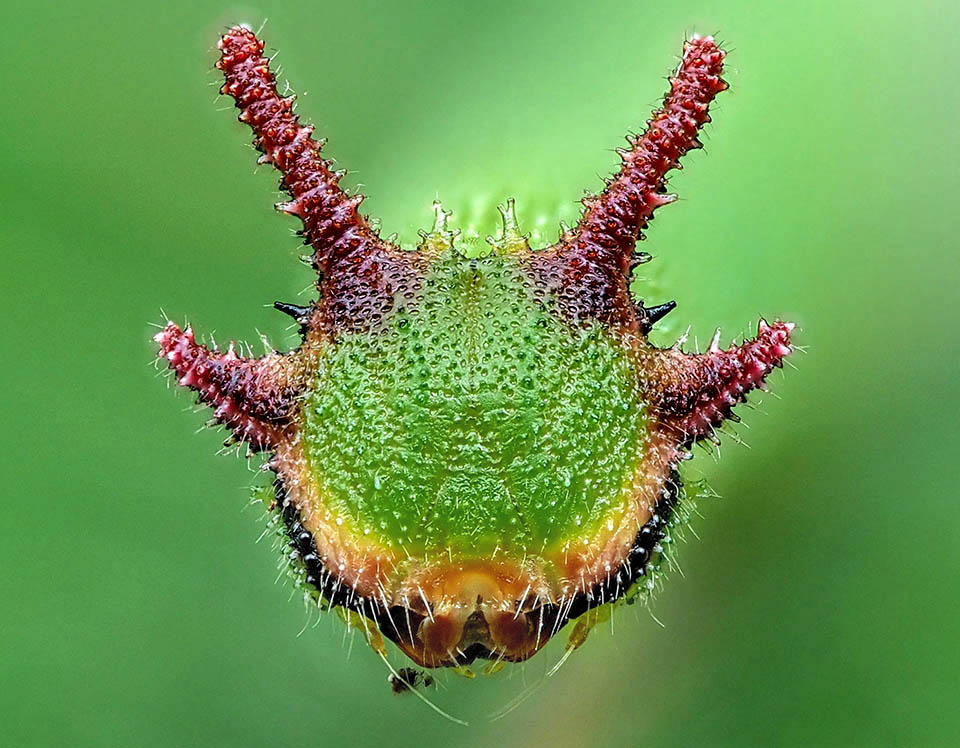 They reach and stop in the clearings and in the open zones going to settle on animal excrements that, if dried, they wet with a liquid emitted by the anus and that they suck by means of the proboscis.

After mating the females oviposit on the leaves of the host plants.

In our environments, representing the extreme north of its diffusion area, it has been considered to be monophagous on Arbutus unedo, hence the common name of Strawberry tree nymph. However, the larvae, in their vast zone of origin and diffusion, are polyphagous and several host plants have been reported. 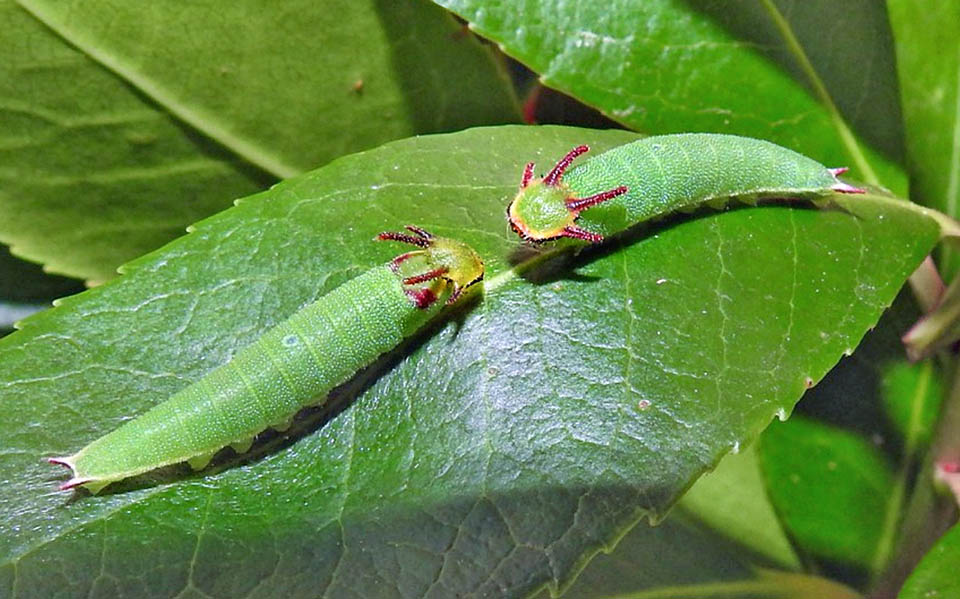 Larvae ready to fight. Territorial like the adults they do not accept intruders on their leaf and when meeting the push each other, head against head, utilizing the horns © Nekane Manjón 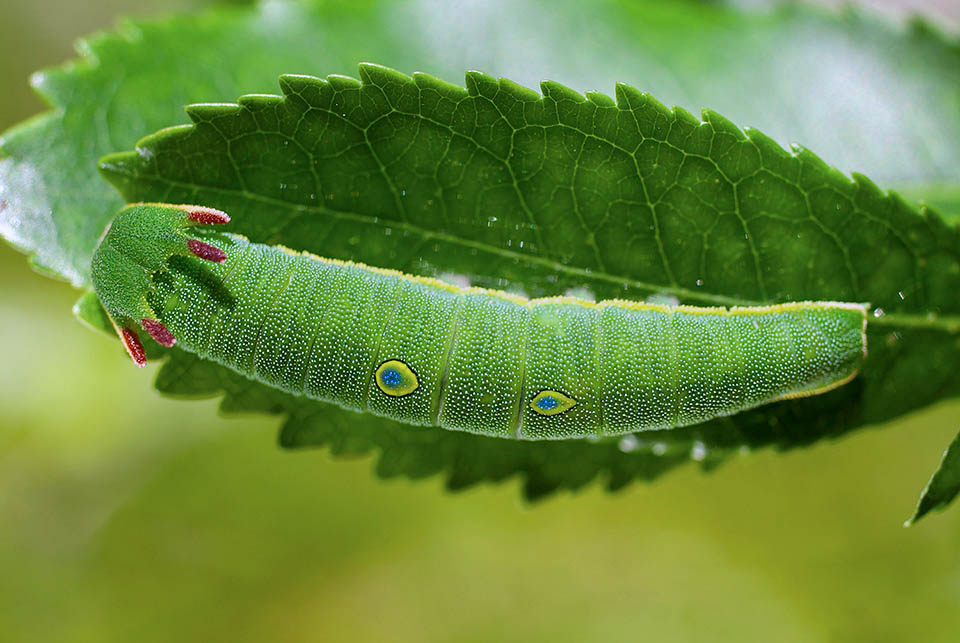 In some Mediterranean citrus fruit areas, the larvae nourish also of leaves of citruses, which highlights their capacity of adaptability to new hosts introduced in relatively recent times in the areas where the Strawberry tree was a component of the Mediterranean shrubland.

Normally it makes two generations per year, the first one occurring from late April and July.

The larvae of the second, born from August to September, when the average temperatures drop below 10 °C, secrete on the leaves of the host plant a thick net of silky threads on which they spend the coldest period. In late winter, they abandon the shelter and reach a suitable site where they pupate; the adults of the first annual generation flicker in the following late spring. 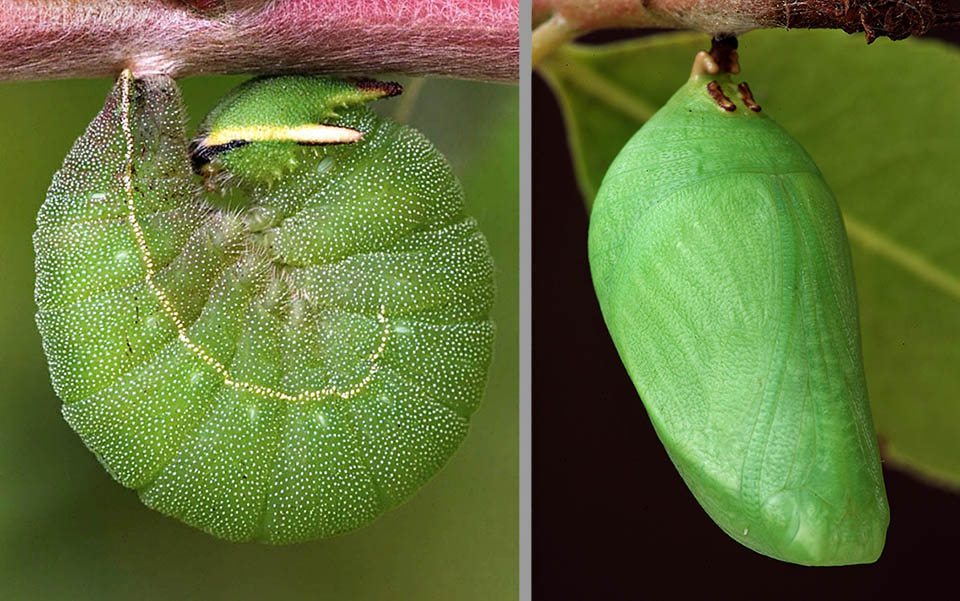 In the last larval stage, called eopupa, it stops feeding, and looks for a twig or a leaf where to make metamorphosis. By curving it reinforces the support with silk threads and grasps with the last pair of abdominal false legs hooks to transform in a translucent green pupa © José Ángel López Muñoz (left) and © Fernando de Toro Ortíz (right)

The female lays, usually, one egg per leaf on the upper pagina of the leaves.

The incubation lasts from eight to twelve days. The newborn larva builds up a couch with some silky threads secreted by the silk glands, on which it gets back in the morning after having eroded during the night hours the surrounding leaves. If the larva nourishes of leaves of Strawberry tree, it meets five moults before pupating; whilst, if it nourishes of leaves of orange or lemon, it will do one additional larval moult reaching the sixth age.

The larvae are solitary and when meeting they push each other head to head utilizing the horns. 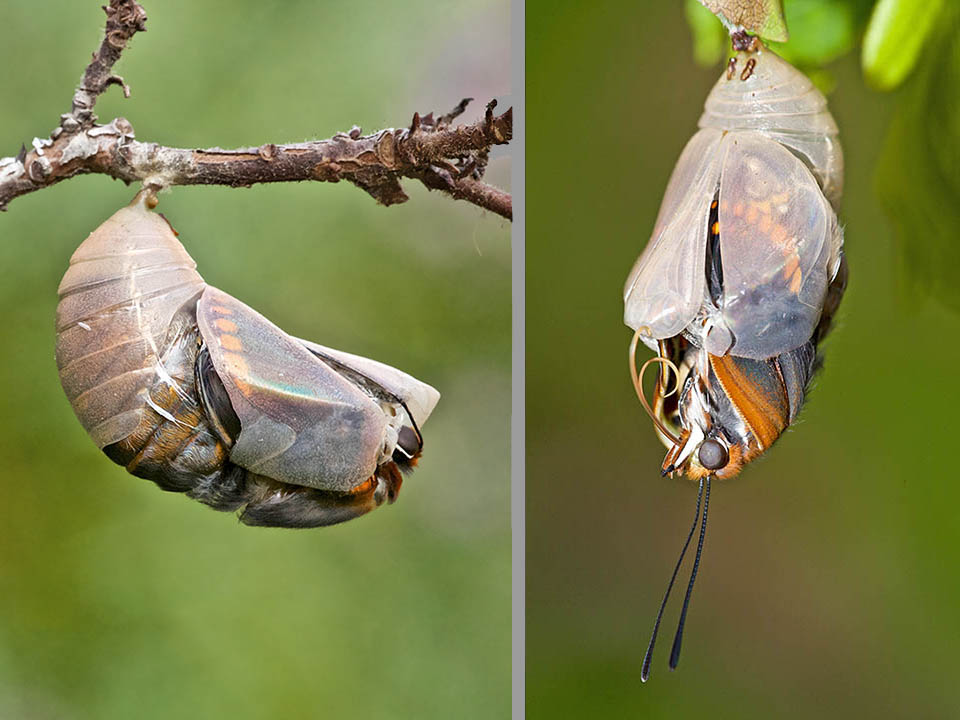 The mature larva does not feed but goes looking for a suitable support where to hang, then curves like a hook and transforms in pupa or in chrysalis.

After a period that may vary from two weeks to one month, from the pupal involucre emerges the adult who sucks the liquids emitted by the ripe fruits in alcoholic fermentation. Not by chance, in order to attract them to certain areas, are exposed containers with wine and ripe fruits.

It is a bivoltine species, that has two generations in a year, but since the eggs hatch gradually, the flights of the adults in the warmest areas, occur, uninterruptedly, from May to November. 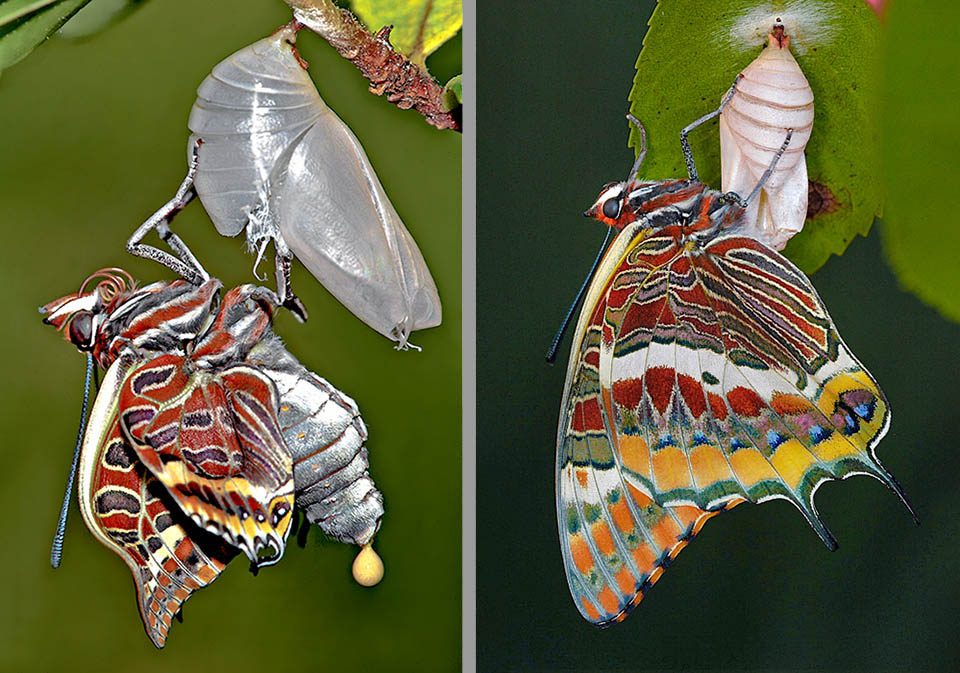 The first generation completes in about forty days, and the adults are more numerous and active in May-June, whilst those of the second generation reach the top in August-September. The fecundated females fly on the cyme of the host plants and after having localized the suitable places, stick one egg on the upper pagina of a leaf.

The embryonic development completes in about one week. The just formed larva utilizes its sharp mandibles to incise the shell and get out after about ten minutes.

The newly born larva as soon as out, swallows the shell that represents its first food, then, with the secretion of the silk glands connected with the spinneret of the mouthpart resting on the leaf, spreads a silky veil on it, realizing with alternating movements of the head, a “bed”, on which it gets back invariably after having fed of the surrounding leaves. 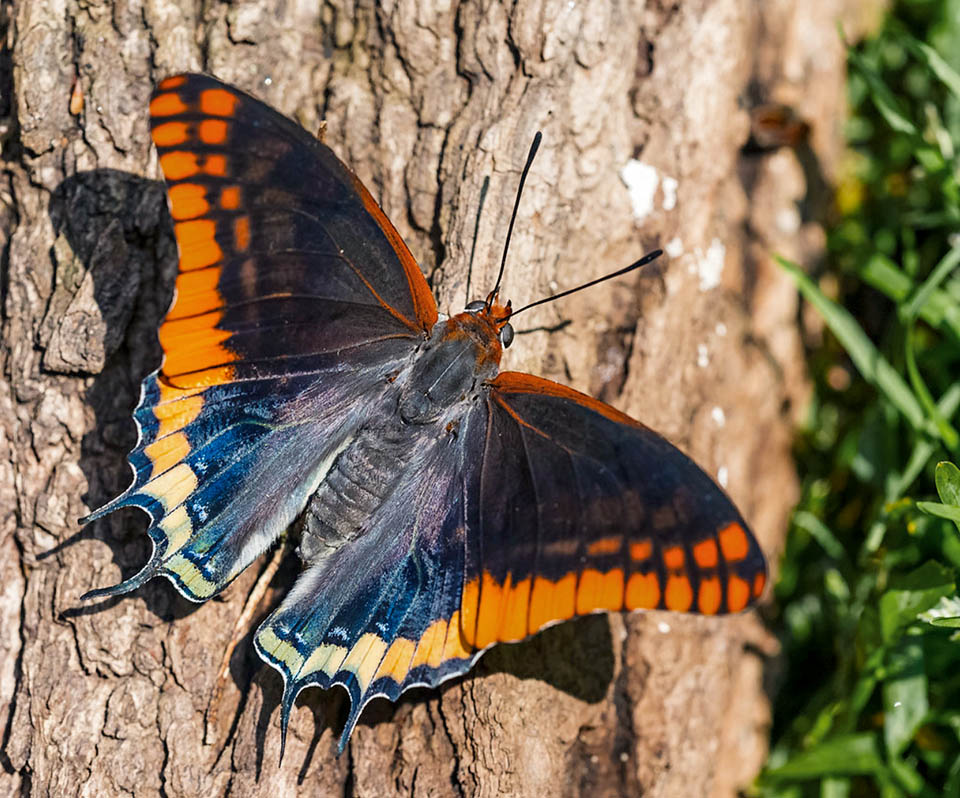 The butterfly, after taking off, now rests on the trunk of a tree © Adam Gor

The larva makes four to five moults depending on the type of host plant increasing gradually its size that, when mature, reaches 4 cm. During the last larval phase, called eopupa, it does not feed, and moves looking for a suitable site where to affect the metamorphosis. Once found a twig or a suitable leaf reinforces its petiole with silk threads to avoid its detachment and covers it with silk, forming, on the lower pagina a small lump on which it clasps the hooks of the last couple of false abdominal legs, curves like a hook and pupates.

After a few days the larval tegument opens dorsally letting the pupa to be seen while grasping a hem of the aforementioned tegument between two segments of the abdomen having the functionality of a gripper, and pulls out the caudal extremity, called cremaster, equipped with hooks with which it fixes itself on the pad of silk that, when eopupa, has built on the support. Rarely the risky coupling manoeuvre fails under penalty of falling and death of the insect. The metamorphosis completes in a period varying from fifteen to thirty days. 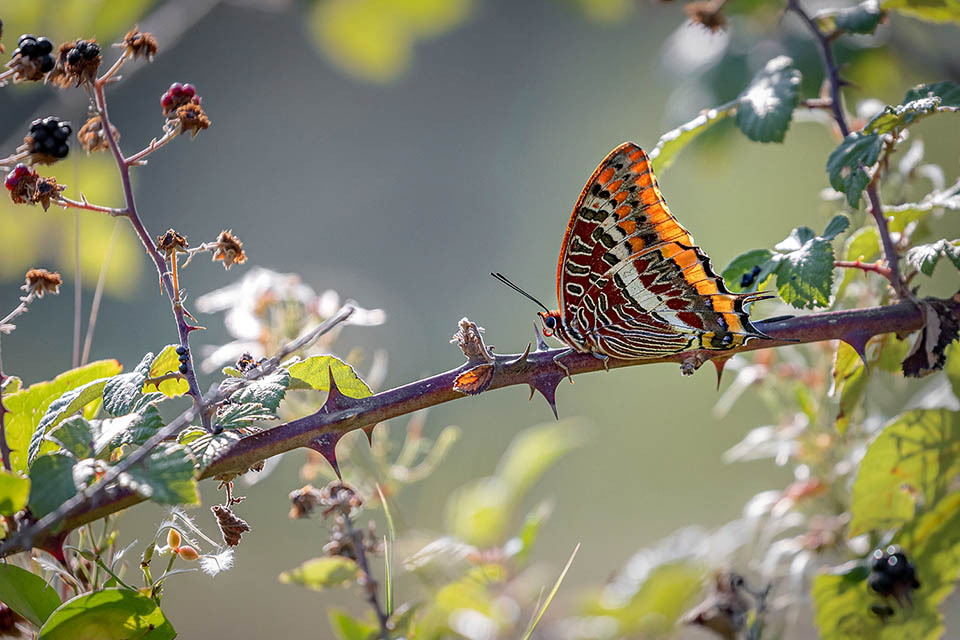 After making reconnaissance flights, settles on the suitable site in elevated position to survey its own territory © Julien Rouard

Just before flickering the pupal tegument becomes almost transparent allowing to catch a glimpse of the body of the adult that, as soon as out from the pupal exuvia, sticks on it with the legs and keeps motionless for about one hour before to take flight.

The main causes of natural mortality are due to the larval infections caused by viruses, bacteria and entomopathogenic fungi as well as due to the attacks of parasitoid entomophagous insects afferent to the orders of the Hymenopterans, that live at the expenses of the eggs and of the larvae of the lepidopteran, and of the Dipterans that lay their eggs on the body of the larvae.