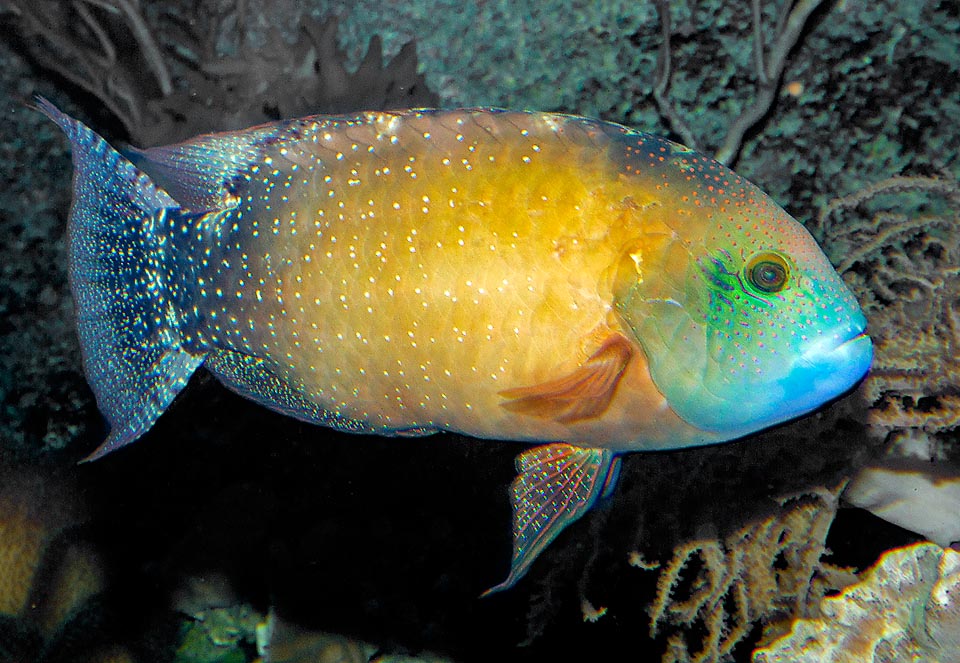 Cheilinus chlorourus male in all its splendour. The caudal fin lobes are less pronounced than in Cheilinus trilobatus and the thin vertical lines are absent © Giuseppe Mazza

The Cheilinus chlorourus (Bloch, 1791) belongs to the class of the Actinopterygii, to the order of the  Perciformes and to the multicoloured and numerous family of the Labridae rich of 71 genera and 549 species.

The name of the genus Cheilinus comes from the Greek “χεῖλος” (cheilos)  = lip, with reference to the showy jaws; whilst the specific term chlorourus comes from the Latinized Greek “χλωρός” (chlorós) = green and “οὐρά” (ourá) = tail, because of the colour of its tail, greenish at times.

It has an extremely vast distribution that practically includes all Indo-Pacific tropical waters. 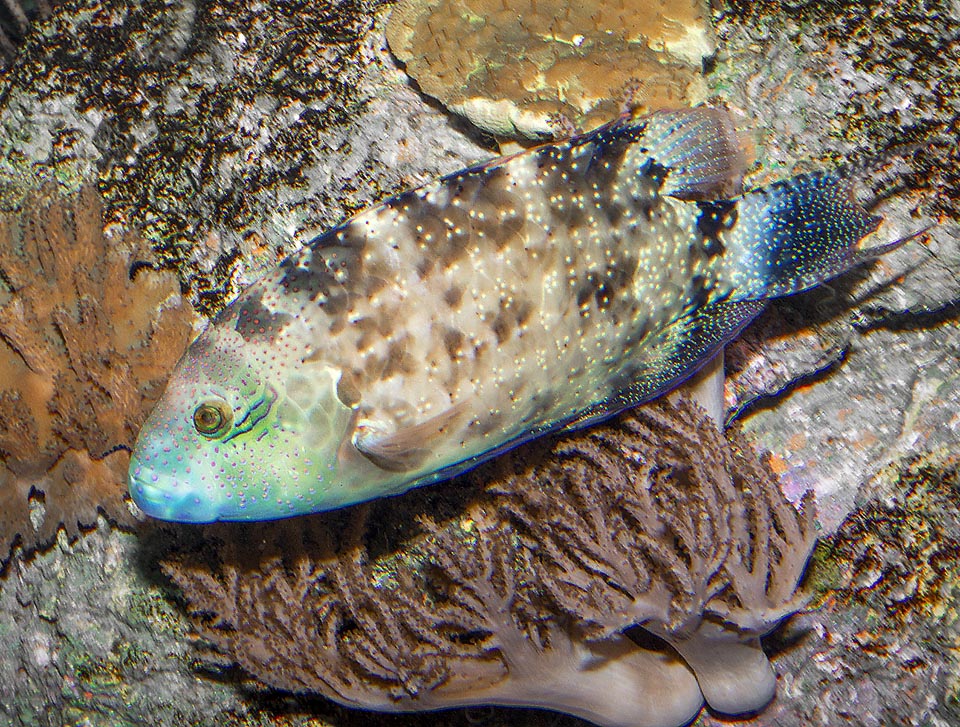 Absent from the Red Sea, we find it, indicatively, along all African coast from Somalia to South Africa including the Seychelles, Réunion and Mauritius; then, eastwards, in the Chagos Islands, the Maldives, India and Sri Lanka, Thailand, Malaysia, Cocos Islands, Indonesia, Philippines, Vietnam and more north, Taiwan and Southern Japan. In Oceania, is common in Palau Papua New Guinea, Micronesia, along the Australian Great Barrier reef and New Caledonia. Eastwards, it reaches the Hawaii Islands, French Polynesia, Marquisas Islands, Tuamotu and finally, in South America, the Galapagos.

The Cheilinus chlorourus  lives in shallow waters, up to a maximum of about 30 m of depth. It frequents lagoons and coastal cliffs, with a predilection for the mixed sand seabeds that it removes along rubble and corals, with powerful jets of water from the mouth to find the preys. 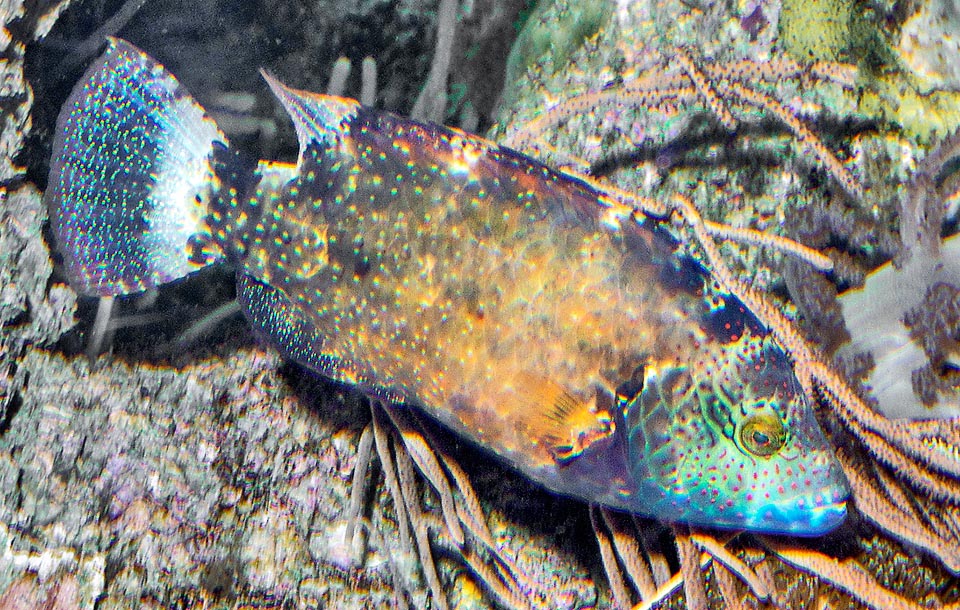 Typical are the white dots present on the body, particularly on the fins. Here the caudal is a starry sky, preceded, as often occurs, by a white belt © Giuseppe Mazza

The young often grow hidden under the big tabulae of the genus Acropora, or protected by their prickly ramifications, but they can also be found in the seagrass meadows. 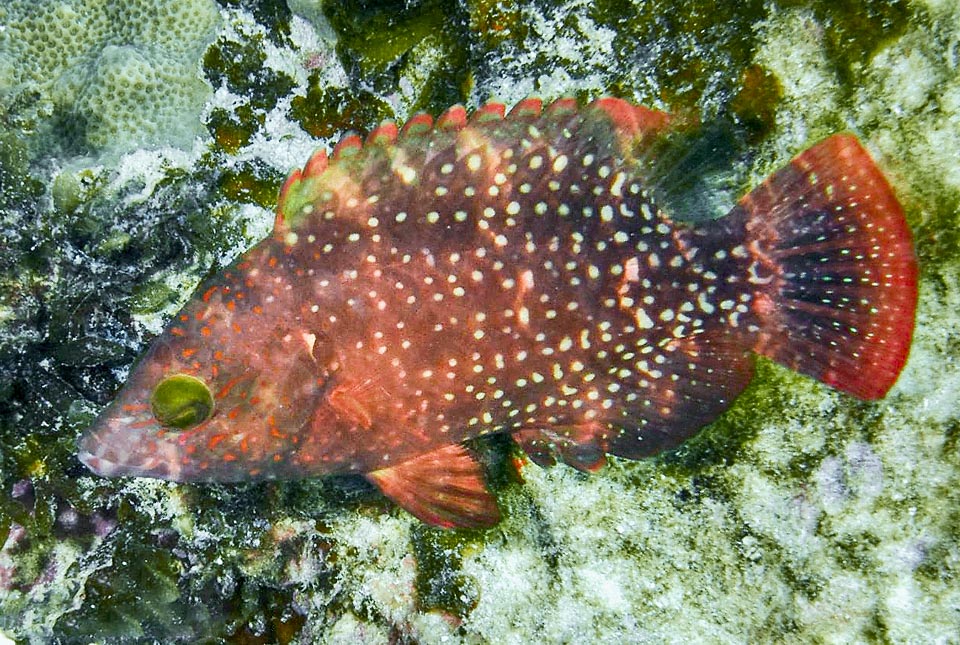 Reddish specimens don’t miss, as in the juvenile phase where well evident are the white small dots of the body © Rick Stuart-Smith, Reef Life Survey

It is, as often occurs in the wrasses, a proterogynous hermaphrodite species, that is with females that while growing transform in males. In the young and in the females, the caudal fin is rounded, whilst in the adult males the lateral rays are elongated and expand, like a Cheilinus trilobatus, but with less marked lobes.

Comparing the two species, the livery of Cheilinus chlorourus  is at first sight quite similar due to the pale and dark zones made by the chromatophores, but are absent the thin and wavy parallel lines of the Cheilinus trilobatus  and, especially, it is characterized by a crowd of small spots, present on the body as well as on the fins, as rightly emphasize the specific terms of punctatus, punctulatus  and guttatus present in the synonyms. 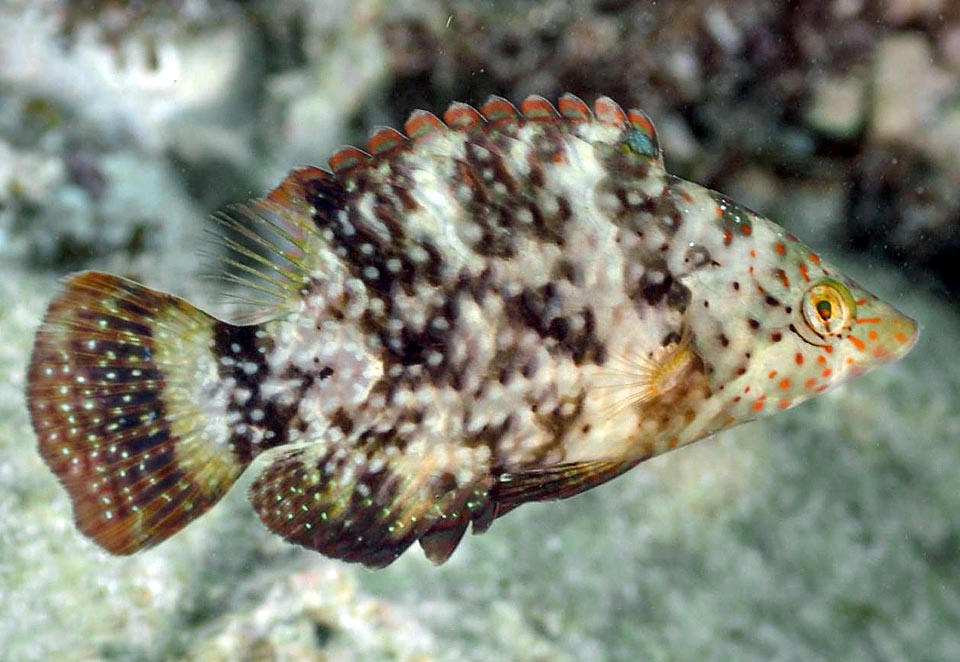 Here an even younger fish. To note the mimetic spots and the long profile of the snout, quite different from the adults’ one © Rick Stuart-Smith, Reef Life Survey

The overall colour is greyish or greenish but are not missing specimens with brown, red or orange shades. Also here is often present a white pale belt at the base of the caudal fin, and the head may display blue-turquoise shades with red hatchings and dottings.

The Cheilinus chlorourus nourishes exclusively of invertebrates mainly crustaceans, shrimps in particular, crabs isapods and amphipods, but also of echinoderms, with a predilection for the brittle stars, molluscs and polyketes.

For the reproduction take form couples and the eggs, fecundated while swimming, are abandoned to the currents. 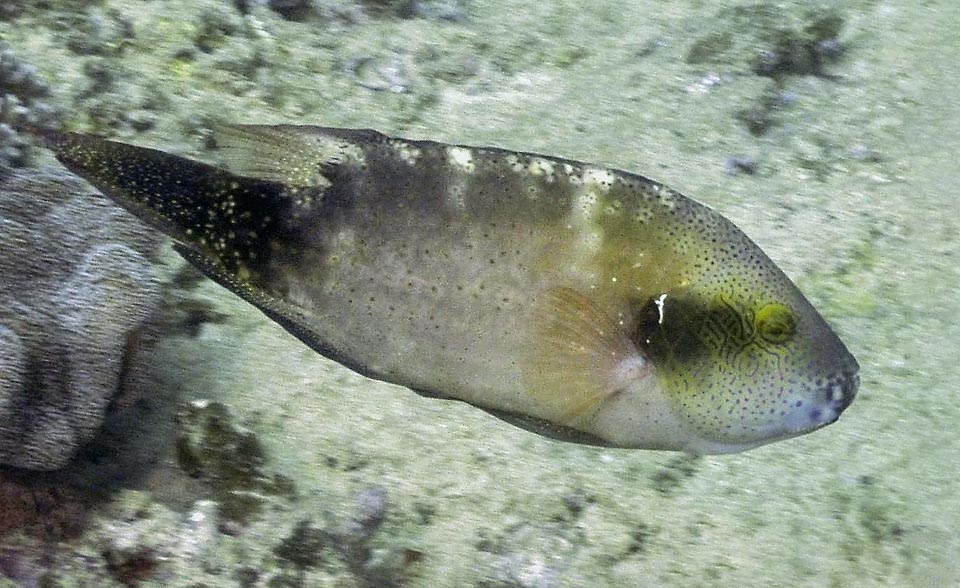 Adult poor of colours, maybe to adapt to the sandy bottom, where this species finds the invertebrates it eats with strong water jets from the mouth © Rick Stuart-Smith, Reef Life Survey

Sometimes the young are sold as aquarium fishes, even if not compatible with the presence of onvertebrates in the pool, but it is obvious that, seen the size, they are suitable for the great public aquaria. The resilience of the species is good, with a possible doubling of the populations in less than 1,4-4,4 years. The result is that, nowadays, in 2020, the vulnerability index of the Cheilinus chlorourus  is moderate, marking 44 on a scale of 100.