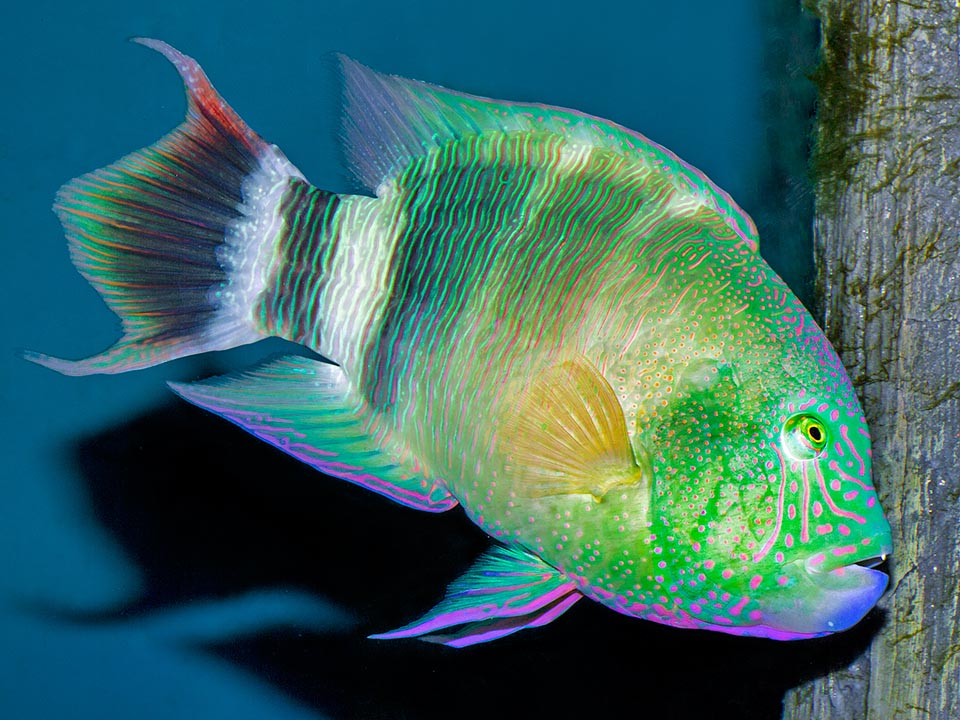 The Cheilinus trilobatus adults, present in tropical Indo-Pacific, are recognized at once due to its characteristic trilobate tail © Giuseppe Mazza

The Cheilinus trilobatus Lacepède, 1801 belongs to the class of the Actinopterygii,  the ray-finned fishes, to the order of Perciformes and to the colourful family of Labridae counting 71 genera and 549 species.

The name of the genus Cheilinus  comes from the Greek “χεῖλος” (cheilos) = lip, with reference to its showy jaws; whilst the specific term trilobatus = with three lobes, in Latin, evokes the trilobate shape of the caudal fin.

It has a very vast distribution in the Indo-Pacific tropical waters. 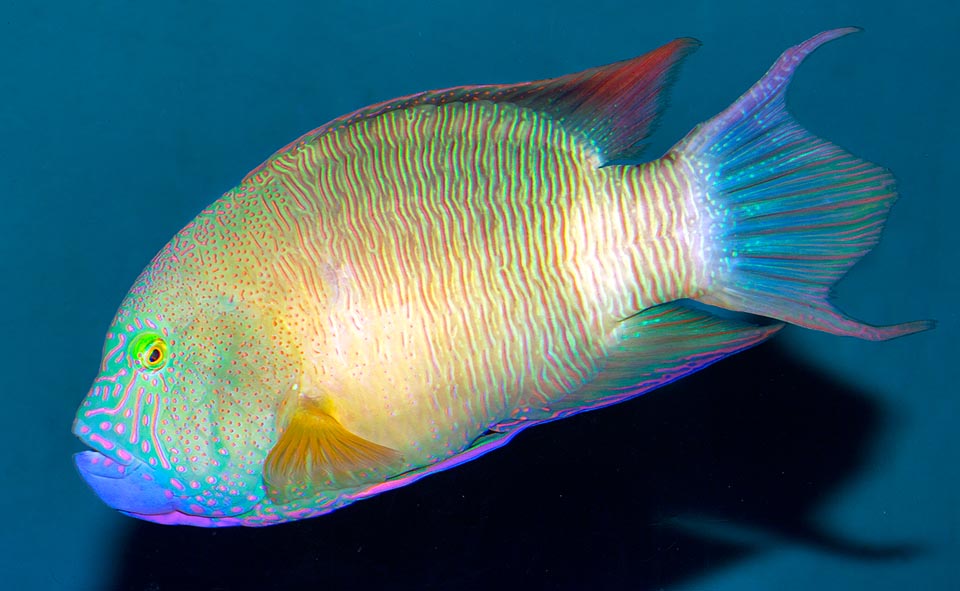 The color is very variable, due to the age and chromatophores changing the look of fish in few seconds. This is the same specimen of above photo, relaxed © Giuseppe Mazza

Indicatively, we find it along the African coast, from the Red Sea to South Africa, including the Seychelles and Reunion, and then, eastwards, to the Maldives, India, Thailand, Malaysia, Cocos Islands, Christmas Island, Indonesia, Philippines, Vietnam and then, northwards, Taiwan and South Japan. In Oceania, it is common in Micronesia, Papua New Guinea, along the Australian Great Barrier Reef and New Caledonia. Finally, eastwards, it reaches the Fiji Islands and the French Polynesia.

It lives in the madreporic formations, often in shallow waters, up to about 30 m of depth. The young frequent also the seaweed-rich cliffs and often grow protected by the ramifications of urticant hydrozoans such as the Fire Coral (Millepora dichotoma). 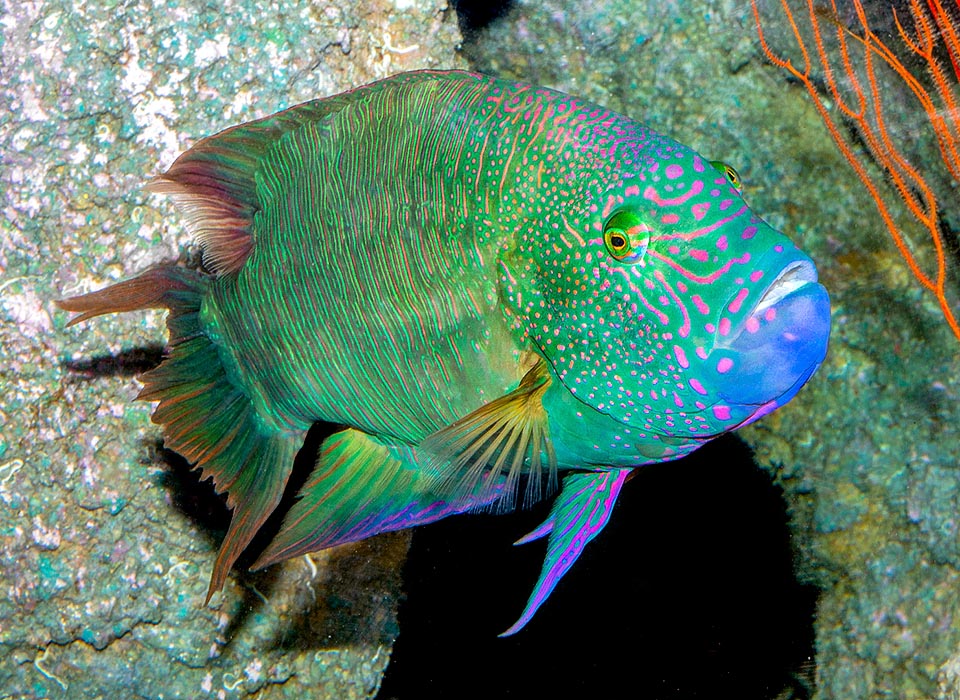 Another adult with green-bluish livery. In common, colour apart, all have a dense succession of thin vertical lines © Giuseppe Mazza

The Cheilinus trilobatus can reach the 45 cm. The body is stocky with the dorsal profile of the head convex and relatively pointed snout, with protruding jaws, armed with 2 solid canines per side. These serve to seize the preys, to remove stones, but especially to break the shells of the mollusks and the armors of the crustaceans they are greedy of.

In the young, the powerful caudal fin is rounded, with possible confusions with the analogous Cheilinus chlorourus, whilst in the adults it is markedly trilobate as recites its scientific name. 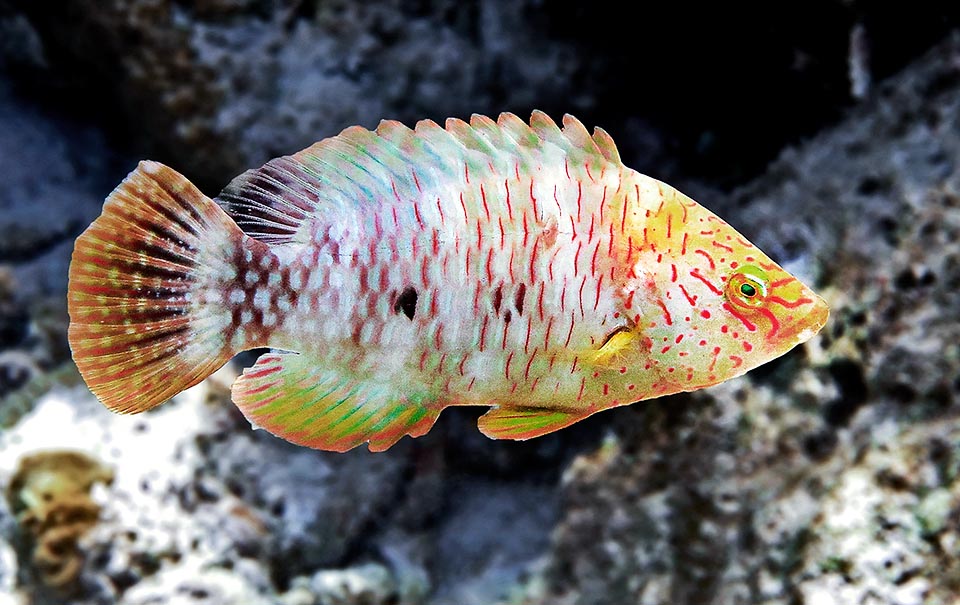 Young livery is quite different and the tail always rounded. This is the first phase and we already see one of the characteristic black dots on the sides © Gianemilio Rusconi

Being in both cases hermaphrodite proterogynous fishes, that is, with females that, while growing, may transform in males, and, in addition, with the juvenile forms quite different from the adult ones, it is not easy to distinguish at first sight these two species and, even less, to give a precise description of the livery that, due to the chromatophores, can change in few seconds, depending on the environment and the mood of the fish.

Apart the adults’ caudal fin shape, we can say that in all possible liveries of the Cheilinus trilobatus is always present a dense succession of vertical wavy lines.

In the young and sub-adults, we also note on the sides few characteristic black spots horizontally lined in the second half of the body. At times, the spots can be very evident that, however, can disappear suddenly, incorporated in vast dark areas, because of the chromatophores. 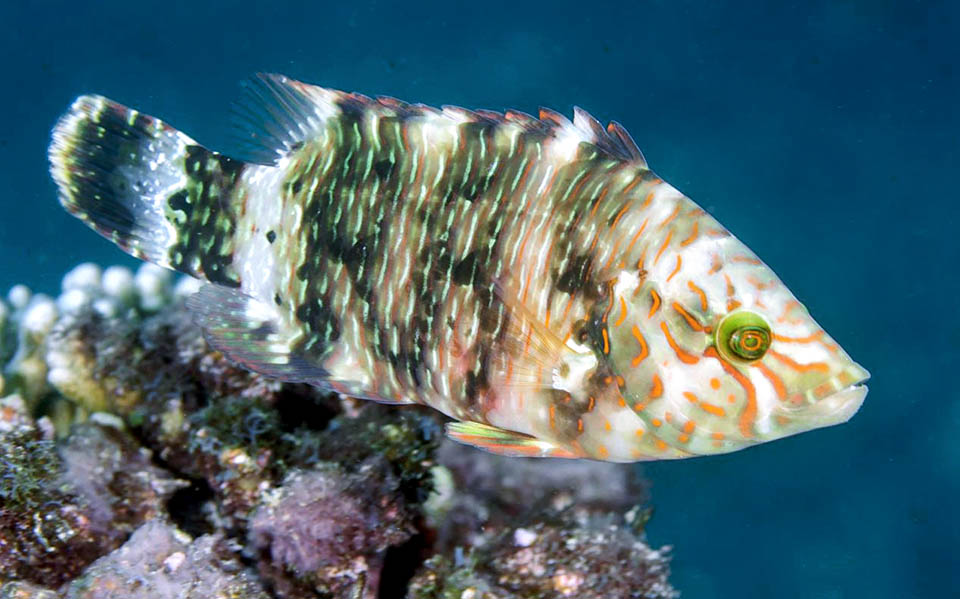 In the following phase they would be more evident but here they appear hidden by black bands. Eye apart, the head patterns have not changed much © Ian Shaw, Reef Life Survey

Besides the pale and dark zones, frequent in both species, the Cheilinus chlorourus conversely displays a predilection for the white small spots: a luminous and minute dotting present on the body and on the fins, not to forget the tail that often is a refined starry arabesque. 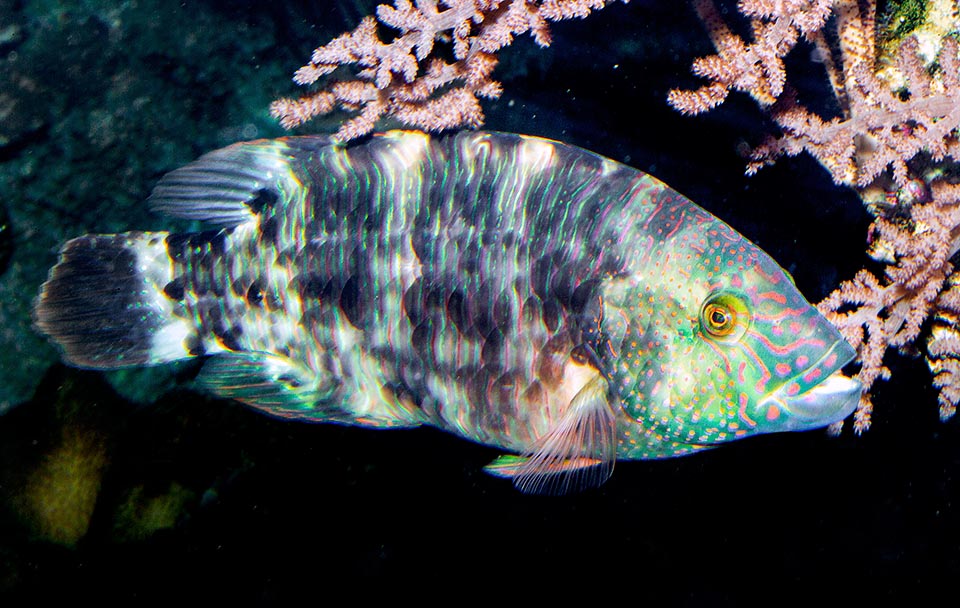 We find them again in this bigger specimen with bluish shades and mimetic livery. The black dots are even less visible © Giuseppe Mazza

Especially in the adults are often evident two white vertical bands in the caudal zone, sided by black bands. They appear and disappear instantly, depending on the mood of the fish, and can be also noted two dark evanescent bands, less marked, in the fore part of the body.

It’s a species living solitary not always easy to approach. For the reproduction couples take form, and the eggs, fecundated while swimming, are abandoned to the currents. 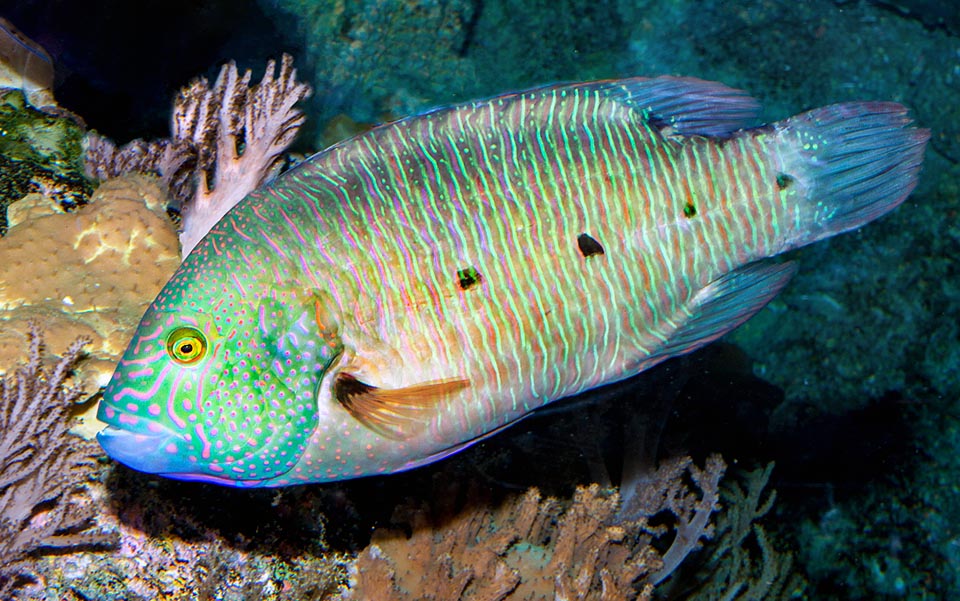 Conversely, this swims relaxed. Do appear clear the typical sub-adults black spots that disappear in the trilobate tail phase. Cheilinus trilobatus can be 45 cm long. At times present in the local fish markets, it is also collected young for the aquariological trade but is currently a species with a moderate vulnerability index © Giuseppe Mazza

Seen its size, even if the flesh is not so prized, it is a fish at times present in the local fish markets. The young are sold also as multi-colored aquarium fishes, but it is obvious that the can however grow only in the big pools of the public aquaria.

The resilience of the species is good, with a possible doubling of the populations in less than 1,4-4,4 years. Consequently, nowadays, in 2020, the vulnerability index is moderate marking 43 on a scale of 100.