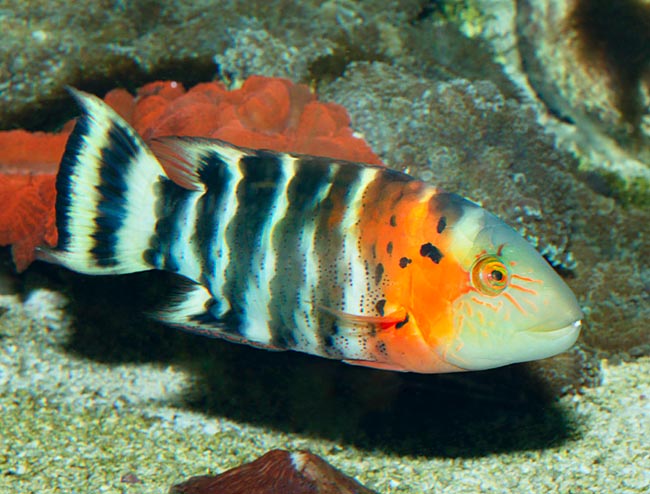 The Redbreasted wrasse (Cheilinus fasciatus Bloch, 1791) belongs to the class of Actinopterygii, the ray-finned fishes, to the order of Perciformes and to the family of Labridae.

The name of the genus comes from the Greek “cheilos” = lip, with reference to the showy jaws.

The name of the species “fasciatus” = banded in Latin, refers to the vertical bands.

It has a very large distribution in the tropical waters of the Indian and Pacific oceans.

Indicatively, we find it in Mozambique, Kenya, Tanzania, Madagascar, in the Red and Arabic seas, at the Seychelles, Mauritius, Reunion, Maldives, in India, Sri Lanka, Thailand, Malaysia, Australia, Indonesia, Micronesia, New Guinea, New Caledonia, Philippines, Taiwan and China up to southern Japan. Eastward, it has colonized Kiribati, Samoa and Tonga. 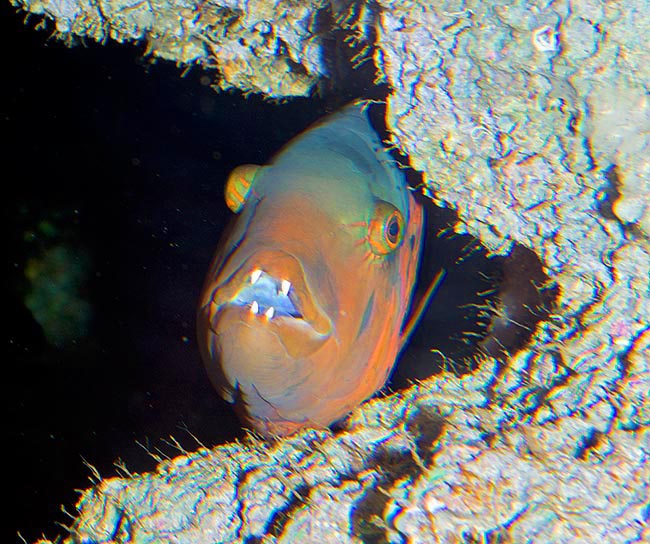 It lives in the madreporic formations up to about 40 m of depth.

It may reach the 40 cm. The body is fusiform, compressed on the sides, with big jaws, as the scientific name states. The lower one is prominent in the adults, and allows a glimpse of two solid canines, present also on the upper jaw, used for breaking the shells of the molluscs and the carapaces of the crustaceans.

The livery is often spectacular. The head, usually with greenish blue, at times also dark, shades is followed by a vertical red-orange zone, spotted of black, with a branch, of the same colour, towards the eye, as the rayed traits surrounding it, as well as the rays of the pectoral and ventral fins. 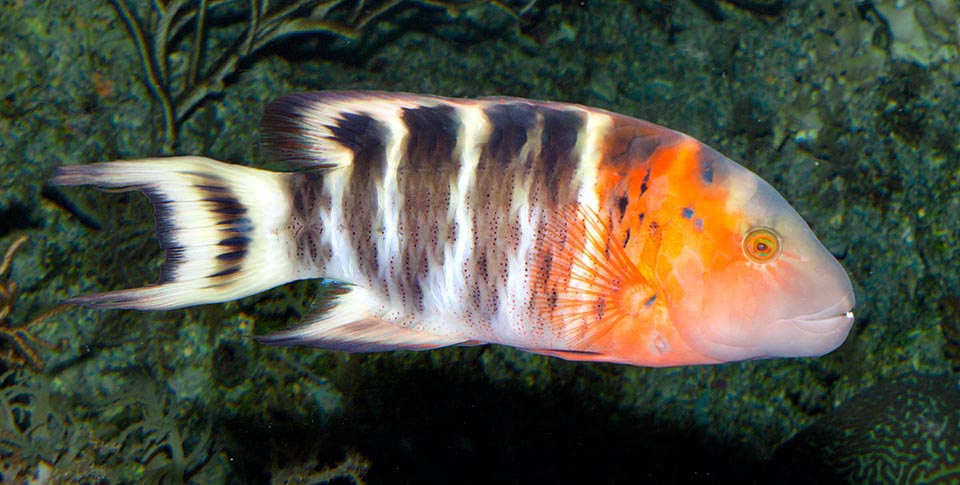 The spawning occurs in group, mostly in the afternoon and in shallow waters, with the males aloft fecundating and patrolling the territory to protect the eggs © G. Mazza

The redbreasted wrasse nourishes mostly of molluscs with shell, crustaceans and sea-urchins, which it breaks by means of its strong jaws and the four solid incisors. 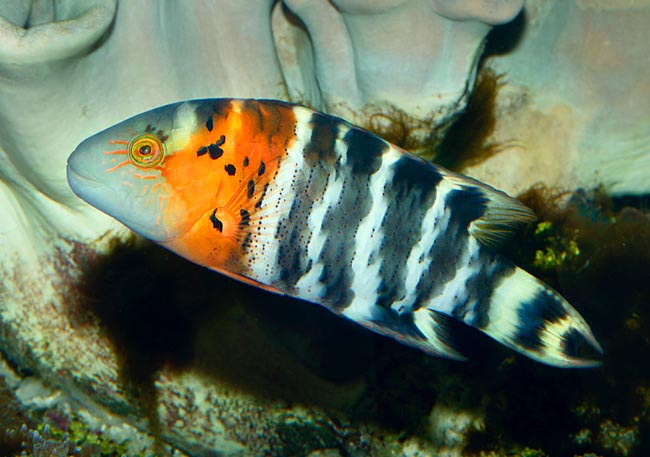 The species is vulnerable as even 14 years are needed to reform the populations decimated by events © G. Mazza

The spawning occurs in group, mostly in the afternoon and in shallow waters, with the males aloft fecundating and patrolling the territory to protect the eggs. The ritual is usually concluded in three hours.

The larval stage, entrusted to the currents, lasts about 26 days and the appearance of the young is quite different from that of the adults. The snout is more elongated, the red-orange spot is absent and the background colour is olivaster with few white bands.

Even if after the IUCN experts the danger for the species is presently modest, even if various local rules forbid the fishing of small specimens for alimentation, and even if the redbreasted wrasses live quietly in the sea reserves, the fact is that the time of doubling of the populations is of 4,5-14 years. As a consequence, the vulnerability index, not negligible, is of 52 per 100.