The Tub gurnard (Chelidonichthys lucerna Linnaeus, 1758), belongs to the class of the Actinopterygii, the ray-finned fishes, to the order of Scorpaeniformes and to the family of Triglidae.

The name of the genus comes from the Greek “celidon”= swallow and “ichthys” = fish, referring to the fact that it swims as fast as a swallow and that, like this one, it often has the back darker than the other triglids. The name of the species, from the Latin “lucerna” = oil lamp, refers to the shape of the fish.

It is present in all the Mediterranean, where it is the most common Triglidae including the Black Sea. After Gibraltar Strait, it moves northwards along the eastern Atlantic coast up to Scandinavia, and southwards, it reaches the Sierra Leone, after having colonized the Azores, Canary and Madeira Islands.

It is a benthic species living between the 20 and the 300 m of depth, preferably on the gravelly or muddy shelves. In summer, it tends to get up to the surface and can be found by around the 10 m. The juveniles frequent the brackish waters of the lagoons and the estuaries, going upstream, for a while, the course of the rivers.

With its 70 cm and the weight of more than 6 kg, it is the biggest triglid, even if the specimens fished are around the 30-35 cm. The head is less stocky and spiny than the Trigla lyra and the body is more elongated. 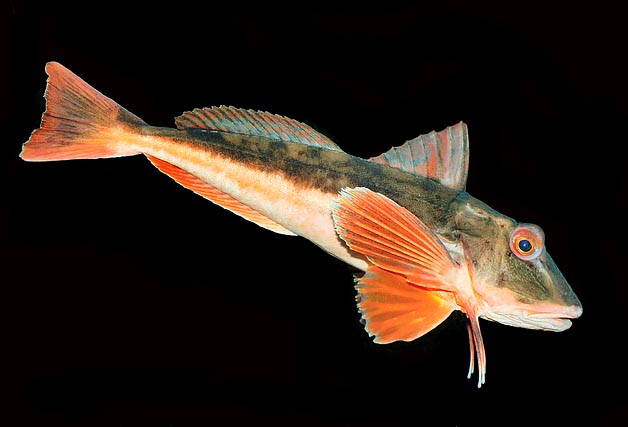 The Chelidonichthys lucerna is the biggest triglid. As fast as a swallow © Giuseppe Mazza

The lateral line is not sharp as the Trigloporus lastoviza but it shows some protuberances, so much that it is noted prima facie. The mouth, low and ample, has jaws and vomer covered by more rows of teeth placed one close to the other, like a pavement.

The colour is fairly variable. The back is often dark, with green or brown spots, notwithstanding an undeniable reddish dominant. As it is often the case for the analogous forms, the belly is pink-whitish and there are possible blue spots on the fins, especially on the inner side of the pectorals, often edged with light blue and with a dark oval big spot close to the body.

It mainly nourishes of crustaceans, especially of swimming schools of shrimps, but also, for about the 20%, of molluscs and bottom fishes. When in danger, it often hides moving the bottom with the tail, while moving in circles. It disappears to the aggressors in a cloud of sand and mud, and when this has deposited it is perfectly camouflaged among the debris.

When it is fished and taken off from the water, it vibrates with the muscles the walls of the swimbladder, producing a strong grumbling, from which comes the French name of “grondin”, from “gronder”, reproach, grumble, hoping to confuse the opponent and to be left in peace, technique probably used also on the bottom with the predators.

Unlike all other Triglidae, the Chelidonichthys lucerna reproduces in midwinter, with thousands of pelagic eggs. In the larval and post-larval stages the three digitiform rays are still connected to the pectorals.

The lifespan of the juveniles is of 15 years, but for redoubling the population, from 4,5 to 14 years are necessary and being its flesh prized, a indispensable ingredient of the fish soups, its fishing should be limited. The vulnerability index of this species is of 40 over 100.