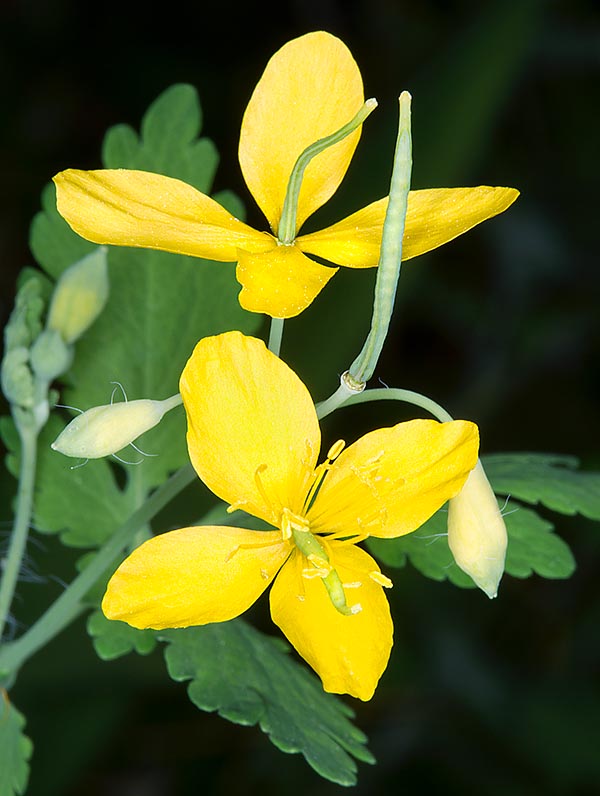 The genus Chelidonium is a monospecific genus including only the Greater celandine (Chelidonium majus L. 1753) called also Swallowwort, Nipplewort and Tetterwort. Its diffusion range was originally Eurasian, but with the time has become Circumboreal (temperate and cold zones of the boreal hemisphere).

The name of the genus comes from the Greek “khelidôn”, (Latin chelidon), swallow because the old people believed that this bird cared and opened with the juice of these plants the sick eyes of their children; however it is more likely that, as Dioscorides wrote, the name has come from the wind called Chelidonium that blows in spring when the swallows come back.

The Romans did call this plant Hirundinaria. More recent is the origin of the name after other authors who get it from the medieval “Coeli donum”, gift of the sky, because it was deemed endowed of supernatural powers.

The name of the species “majus” should come from the Latin “maius” = May, due to the period where the blooming concentrates, or, after others, from “magnus”, meaning in Latin big.

The greater celandine is a perennial, or rarely biennial, herbaceous plant, (10) 30-50 (90) cm tall, with big taproot, orange-brownish, prostrate or ascending stem, ramose, with enlarged and frail nodes as well as the stems and the branches, sparsely pubescent.

Every part of the plant emits, when broken, whitish latex that, in contact with the air turns orange, dark red and finally brown.

It has leaves alternate, tender, petiolate, pinnatosect with ovate contour (5-12 x 7-15 cm), with 5-7 (11) lobed or parted segments, rounded, opaque green above, glaucous below.

The fruits appear from April to October from 2 to 6 in small pedunculate terminal umbels; the are about 2 cm broad, with two free sepals, precociously deciduous, and 4 equal petals, ovate-spatulate, bright yellow, of 5 x 9 mm, also these ones fugacious; yellow stamina, enlarged under the anthers, bilobed stigma. 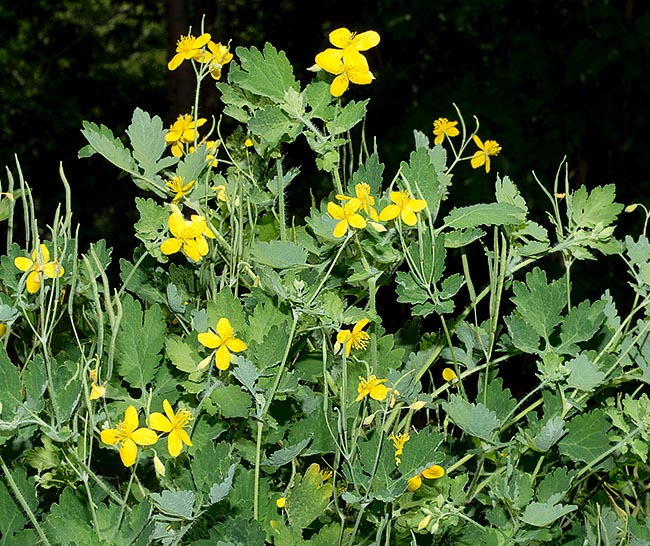 Usually annual, can be 50 cm tall, with about 2 cm flowers, and long fruits that can exceed 3 cm. It brows on the walls, ruins, in the riparian thickets, shady sites, from the plain up to about 1200 m of altitude © Giuseppe Mazza

The fruits are a sort of capsules that when ripe open due to detachment and slipping of the inner layers of the pericarp, siliquiform, linear, glabrous, erect, gibbous and often sinuous, can exceed the 3 cm, opening in two valves from below, with two inner rows of small ovate-reniform seeds, with surface finely and superficially with alveolate drawing, glossy, of brown-dark or blackish colour and with a white excrescence (botanically, strophiole or elaiosome), fleshy, rich of oil and sought for by the ants that provide to the dissemination (myrmecochory) by carrying the seeds to the bottom of the cracks of the walls.

They are in fact greedy of these excrescences of epidermic origin but do not touch the seeds which find the right place for germinating. All the plant, when manipulated, emanates an unpleasant smell that can be defined as “narcotic-virose”. 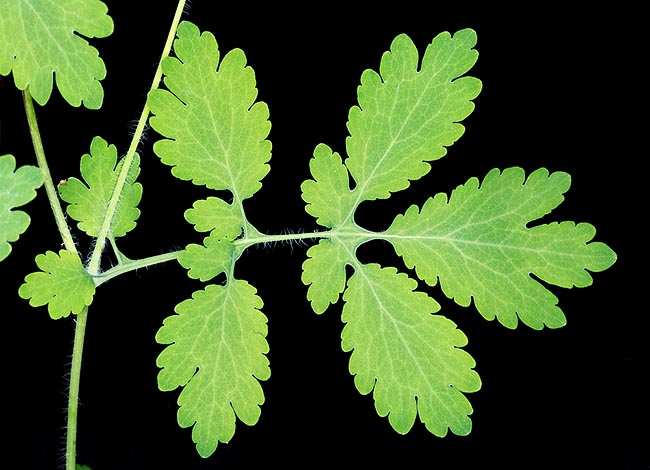 The elegant alternate leaves can be 15 cm long. They are tender, petiolate, pinnatosect with ovate contour with lobed or parted segments, rounded. The upper page is opaque green, the lower glaucous © Giuseppe Mazza

The balsamic time for the harvesting of the entire plant stands by the end of summer.

When fresh the latex and its alcoholic glycerinated extract are used as keratolytic topics to regress the skin warts, papillomas, psoriasis and to soften calluses and corns.

In the country the practice was, before intervening to help the delivery of the cows or of the horses, to use as hand disinfectant a decoction of plants greater celandine and, in case of toothache, was employed the fresh plant chopped in the boiling water, for suffumigations to alleviate the pain.

Some alkaloids of the greater celandine have proved effective against the golden staph.

The decoction of the plant or the juice, much diluted, is used in the blepharitis, eyelid ulcers, conjunctivitis and chronic ophthalmia, under medical control. 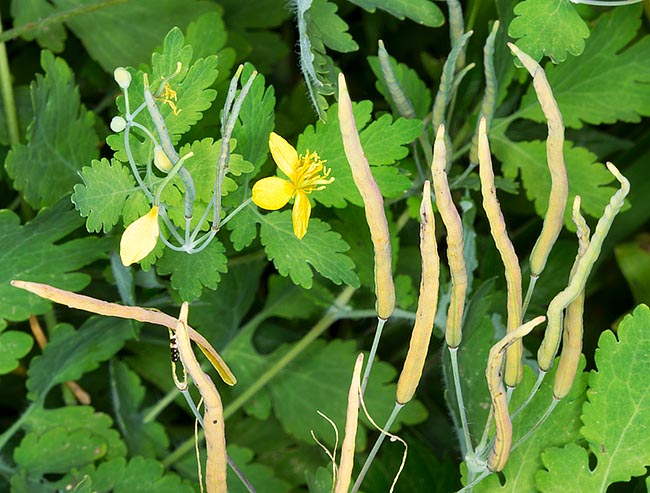 The flowers open April to October, and the fruits are siliquiform capsules © Giuseppe Mazza

The preparations for internal use are exclusively of medical-herbalist competency, and are therefore to be excluded from the domestic employments.

On the basis of proven cytotoxic powers, the greater celandine is still under study with other species (Colchicum, Vinca, etc.) as potential sources of active principles in the oncologic therapies.

The chelidonine, alkaloid chemically similar to the papaverine, lke it and when is extracted from fresh juice, has a spasmolytic effect on the biliary tract and on the bronchi.

The greater celandine is at times cultivated in the gardens for hedges, especially its variety ‘Laciniata‘ characterized by crenulated or incised-toothed petals and foliar lobes deeply incised.

The greater celandine similar to other papaveraceous plants like the poppies, for instance, the common corn poppy (Papaver rhoeas) that begins blooming at the same as this and to other genera such as Roemeria and Galucium, Ipecoum, Platycapnos, Fumaria, Corydalis, etc., or to the Californian Escocholzia with its wonderful petals of bright orange colour cultivated as ornamental in the gardens that contrast and well match with the glaucous-blue light colour of the plant. 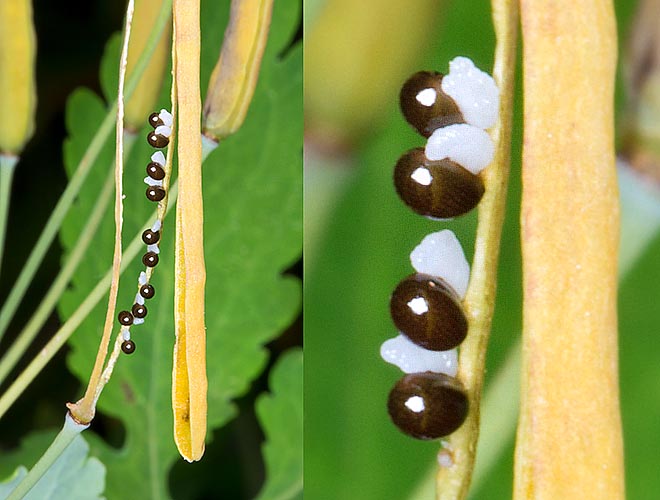 They open when ripe. The seeds well show, in the right close-up, the fleshy outgrowths called strophiole or elaiosome. Rich of oil, are much looked for by ants who so provide to the dissemination © Giuseppe Mazza

We remind that Galucium flavum, known as yellow horned poppy due to the very long capsules it produces, coastal and nitrophilous plant living in the dry slopes, dunes and the sea beaches, contains in its green parts the active principle glaucine, the bitter substance glaucopicrine besides to chelerythropine, protropin, sanguinarine, resinous and mucilaginous substances.

From pressing the fresh plant they get a yellowish juice which is, since long time, utilized in the human and veterinary medicine for the medication of the ulcerated skin surfaces and, in the popular tradition they prepared infusions and decoctions do administer the children as sedative even if, due to the content of alkaloids, this is a practice to be strongly advised against.

I recall in this regard that the employment of plants, edible wild as well as officinal, excepting those of tradition consolidated in the time and free from hazards such as the presence of poisonous or toxic substances (chamomile, lime, mallow, Melissa, thym, etc.), must not be done without the guide of a physician or of a titled herbalist and, in any case, the harvesting must be done in healthy locations, far away from roads, industrial areas, fields with intensive agriculture where use is done of herbicides, phytosanitary products and sewage. 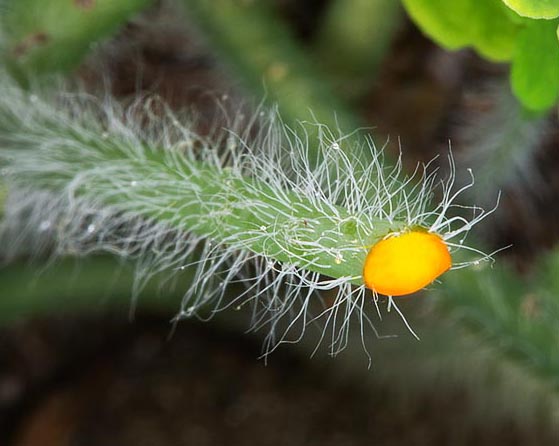 Every part of the plant, cut, emits whitish latex that at the air turns orange, dark red and finally brown. Still now is a valid product for taking off the warts © Giuseppe Mazza

Latex for eliminating calluses and warts

Break small pieces of stem and utilize the fresh latex thrice a day on the callus or in the warts protecting the healthier skin. All days till regression.