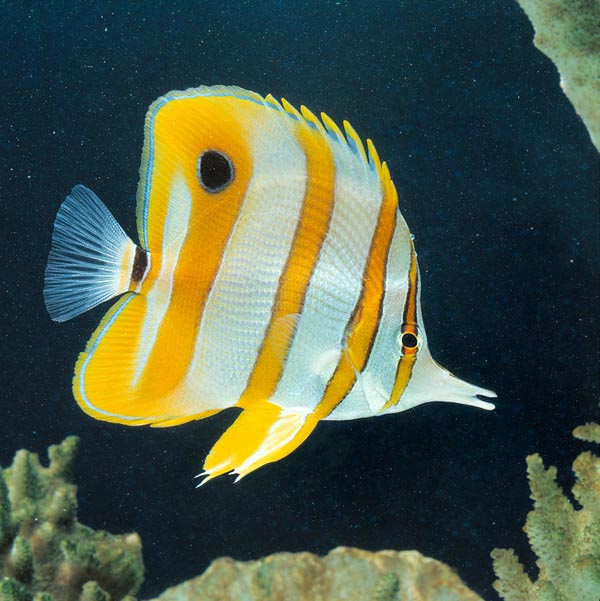 The well known Beak Coralfish or Copperband Butterflyfish (Chelmon rostratus Linnaeus, 1758) belongs to the class of Actinopterygii, the ray-finned fishes, to the order of Perciformes and to the family of Chaetodontidae.

It is characterized by a long beak, or rostrum, which earned him the name of the species “rostratus”, whilst the name of the genus comes from the Greek “chélé” = nipper.

An invaluable tool for hunting small invertebrates, mostly crustaceans, amongst the cracks of the rocks and the corals, where its showy livery reveals even mimetic.

The diffusion of this species is very wide, from the Indian Ocean and Indonesian archipelagos up to northern and eastern Australia.
It is frequent also in the Red Sea.

At home in the marine or brackish tropical waters of the estuaries, where it lives at small depths, usually never under the 25 m.

It does not migrate and is quite attached to its territory so much that also in the big aquaria only few specimens can be hosted because they fight each other.

The young swim in schools, later on the adults set apart. Monogamous, they live solitary or in pairs.

It can be 20 cm long, including the rostrum, and has an unmistakable look. Silvery body with orange-yellow bands which, when approaching the head get increasingly narrow and fringed with dark, camouflaging the eye, whilst a fake, back, eye stands out by the end of the dorsal fin in order to mislead the predators. And in order to even more confuse the ideas in the often murky waters where they swim, there is even a spare second fake eye: black spot, perfectly symmetric to the eye, placed at the base of the caudal fin.

After lengthy discussions, the ichthyologists have reached the conclusion that there is no sexual dimorphism, even if they have remarked that the frontal profile of the male is usually almost perpendicular to the rostrum, whilst the female’s one is more obliquely set with the beak slightly bent downward. 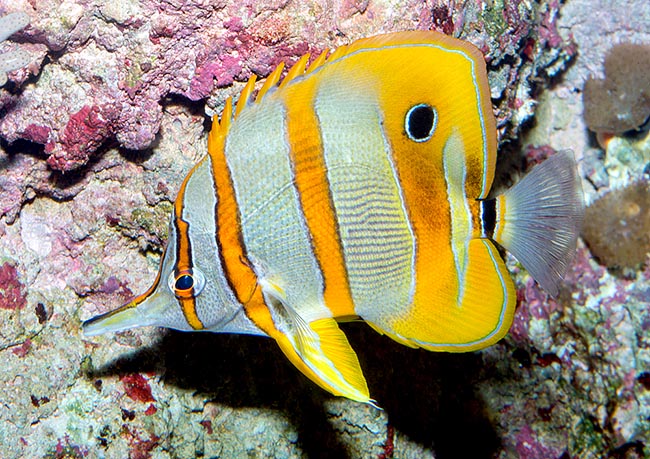 The Chelmon rostratus is an oviparous species which may reach the 10 years of age.

Flat as it is, with little flesh to be eaten, it has few foes in the wild and is not an endangered animal, even if, then, is fished without scruples, to languish miserably in the home aquaria.

The unfortunates, destined to the aquariology, are stored on the spot in “adaptation pools”, where most of them pass away, refusing the food. When the survivors border the plane, placed for hours in small bags with little water and full of oxygen, they are often meagre and discoloured.

When they arrive, often half of them have deceased and when the survivors do not fall in experienced hands, it is quite difficult that they may recover. Therefore, they should be kept for the big public aquaria, also because this is a greatly sensitive species to the chemical variations of the water, obviously more stable in large pools. Here, the presence of well settled down specimens, which accept the food, can encourage them to eat. Usually, we start with larvae of Artemia salina and worms Tubifex and then switch to fresh, frozen or freeze-dried mussels and shrimps.

A curiosity. The beak butterflyfishes are greedy of a sea anemone, the Aiptasia mutabilis, spread in the Mediterranean and the eastern Atlantic. This anthozoan reproduces quickly, often plaguing the tropical aquaria which pump sea water, so much to cover their glasses. And then, the frail Chelmon rostratus not only will be able to live happily, like in the tropics, but will reveal itself also as a useful predator. The vulnerability index of this species is of 16 over 100.

In 1988 the Chelmon rostratus had the honour of a stamp of the Principality of Monaco.