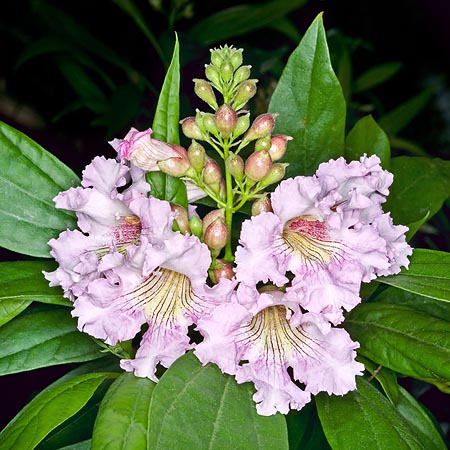 The × Chitalpa tashkentensis T. S. Elias & Wisura (1991) is a intergeneric hybrid, Chilopsis linearis × Catalpa bignonioides, which combines the name of the parents (beginning of one and end of the other) in its name ; the name tashkentensis refers to the place where it has been obtained, the Botanical Garden of the city of Tashkent, in Uzbekistan, in 1964. The hybrid has been introduced in USA in 1977.

Chilopsis linearis is a small tree native to USA and Mexico, the Catalpa bignonioides is limited to south-eastern USA.

Very ramified, fast growing, tree with deciduous leaf, tall up to 6-9 m, with extended crown, has lanceolate, 10-18 cm long and 2-4 cm broad leaves, with a glossy pale green colour. The inflorescences are terminal, 20-25 cm long, racemes, with 15-40 funnel-shaped, 3-5 cm long flowers with frayed edges, of a white or a lavender-rose colour and yellow throat with purple venations. The hybrid is sterile, it is therefore to be reproduced in vegetative way (cutting). Recently (2006), they have produced a fertile hybrid of Chitalpa, introducing polyploidy chemically.

Tree cultivable in an ample variety of climates, particularly suitable for climates with long and dry summers, like the Mediterranean one, which is becoming popular due to its favourable characteristics, such as the abundant blossoming lasting from late spring to autumn, the resistance to low temperatures, as it can resist to temperatures as low as -15°C, possibly losing the aerial part, but vegetating again from the foot in spring, and the adaptability to different types of soil, even if it prefers those rather sandy.

It is to be positioned in full sun, to be watered regularly, if recently planted, during summertime in the zones with dry summers; adult plants can be watered occasionally, as they can stand long periods of drought without problems, characteristic which has been inherited from the Chilopsis.

It has proved to be also suitable for cultivation in particularly windy locations, thanks to its sturdiness. It bears pruning, to be done during the rest period, which are useful to rejuvenate the plant. Finally, having a not much invading radical apparatus, due to the characteristic of developing the roots in depth, it is suitable for utilization as road tree and in patios and small courtyards.