The Chrysiptera starcki (Allen, 1973), known as Starcki demoiselle, belongs to the class of the Actinopterygii, the ray-finned fishes, to the order of the Perciformes and to the family of the Pomacentridae that hosts more than 400 species, among which the clownfishes and the damselfishes.

The name of the Chrysiptera, that counts about 30 species, comes from the Greek “χρυσός” (khrusos) = gold and “πτερόν” (pterón) = wing, fin, due to the golden fins, whilst the specific starcki = of Starck in latin, recalls the American marine biologist Walter A. Starck II who, during an immersion with Gerard Robert Allen in Osprey Reef, in the Coral Sea, pointed him out this species.

The Chrysiptera starcki is present along the coasts in the western Pacific waters, from the RyuKyu Islands up to the south of Japan, China and Taiwan, up to Australia, Fiju Islands, New Caledonia and Tonga.

It mostly swims on the outer side of the reefs, usually at 20-60 m of depth, often on sandy bottoms spread with rocks that offer fast hideaways. 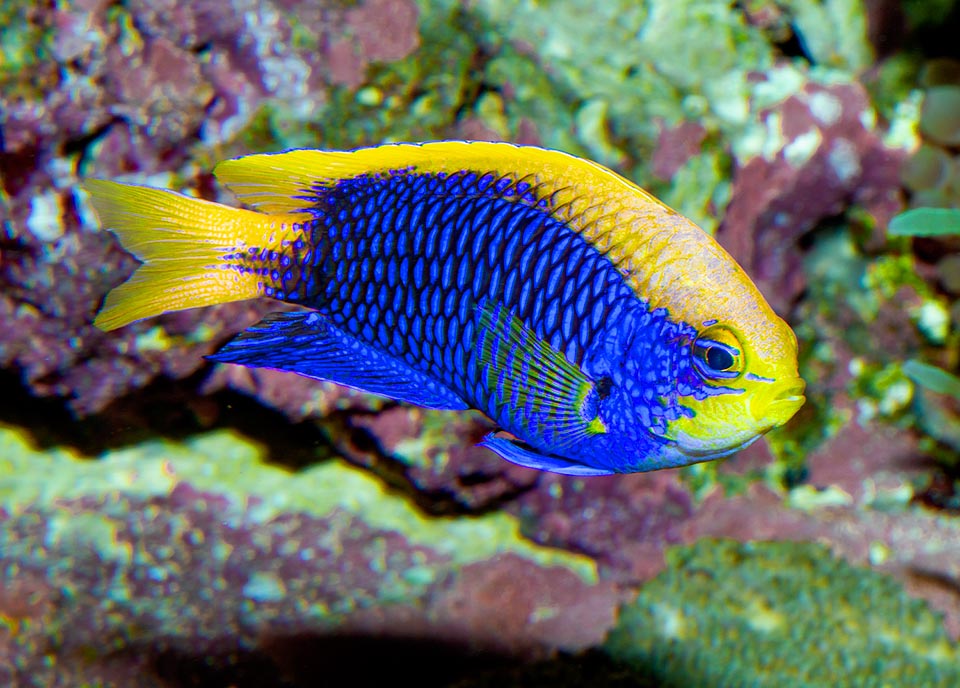 About 7 cm long, the Chrysiptera starcki is present, at 20-60 m of depth, along the western Pacific from south of Japan to Australia and Tonga © Giuseppe Mazza

The body is iridescent electric blue, as in the analogous Chrysiptera parasema, but here the yellow zone extends well beyond the caudal peduncle. From the fore part of the head starts in fact a showy golden band that goes ahead along the back up to the tail, including the dorsal fin and the caudal, whilst the anal and the pelvic are blue. Dots and strokes blue, also on the eye, increase the camouflaging effect, but the defense is mainly entrusted to the whole look, violently broken by the chromatic contrast that confuses for some moments the predators while the fish takes shelter in a ravine.

In the northern populations of its range, south to Japan, the caudal peduncle is entirely blue but proceeding towards Australia the blue zone reduces progressively and at the end of the caudal is totally yellow, whilst the lobes of the caudal fin, roundish in the north, get pointed. It may be confused with the Chrysiptera flavipinnis, but here the yellow belt however surrounds all the fish, fins included. 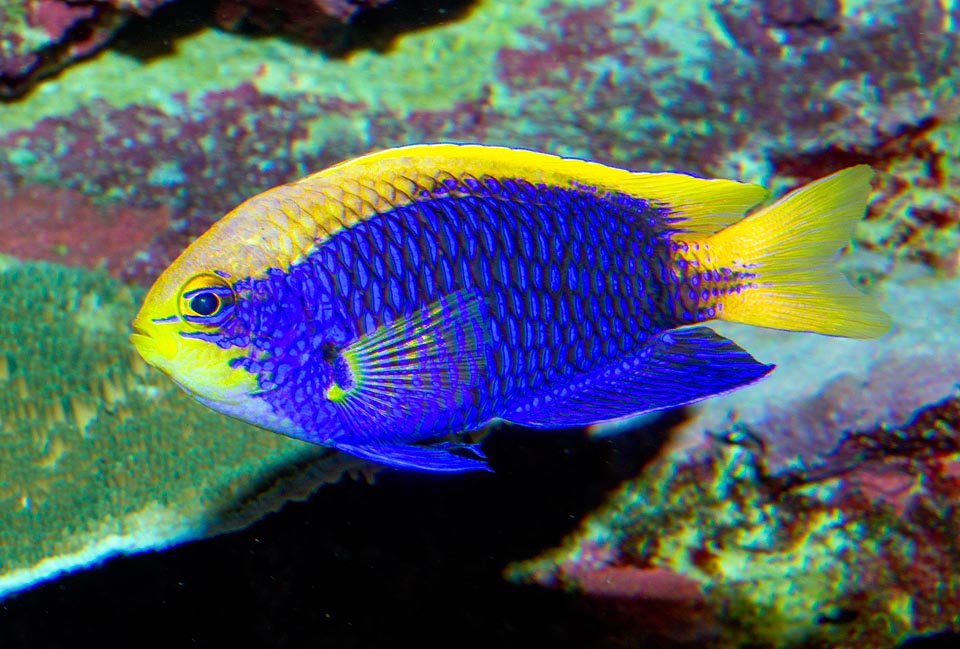 Unmistakable due to the showy yellow dorsal belt going from tail to chin, it nourishes of plankton, algae and small benthic crustaceans © Giuseppe Mazza

The Chrysiptera starcki is a diurnal omnivorous species that nourishes of plankton, algae and small benthic crustaceans. During the reproductive time the males are particularly territorial and attract the attention of the females with sparkling parades that indicate the site chosen for the nest, intended to get hundreds of eggs glued to the bottom. They are very small and the male surveys them till the hatch oxygenating them with the movements of the fins to avoid the onset of molds.

It is a fish well adapting to the aquarium life. Easy to feed, it may however get aggressive, as often occurs in the Pomacentridae, towards the companions of pool, and it is good practice to furnish him a small hideaway where to hide if disturbed and where to sleep peacefully.

The Starcki demoiselle is not nowadays (2020) an endangered species. The populations decimated by the events may double their members in less than 15 months and the vulnerability index marks only 16 on a scale of 100.