The Chrysiptera parasema (Fowler, 1918), known also as Yellowtail blue damsel, belongs to the class of the Actinopterygii, the ray-finned fishes, to the order of the Perciformes and to the family of the Pomacentridae that hosts more than 400 species, among which the famous clownfishes and the damselfishes.

The name of the genus Chrysiptera comes from the Greek “χρυσός” (khrusos) = gold and “πτερόν” (pterón) = wing, fin, due to the golden caudal fin, whilst that of the species, parasema, comes, then Latinized in “parasemum”, always from the Greek “παρασημα” (parasēmon), word formed by “παρα” (para) and “σημα” (sēma) = sign, with reference to the colour of the fish, rightly called in biology parasematic, because with its showy yellow tail distracts from the head the attention of the predators addressing them towards the tail, a non vital organ. 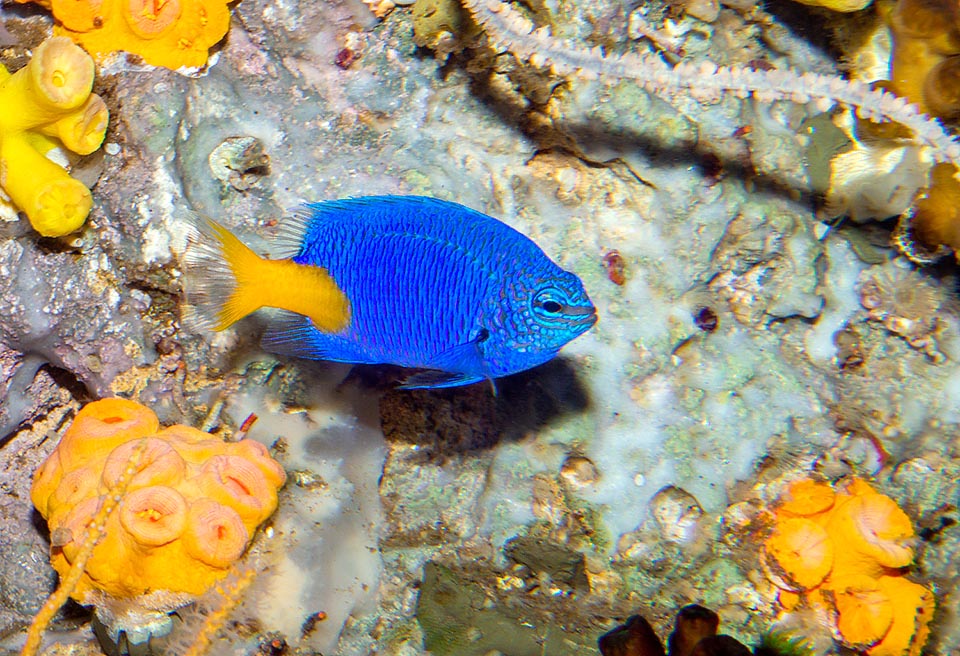 Long 7 cm at most, the Chrysiptera parasema is present, in shallow waters, in the madreporic formations of western Pacific Ocean © Giuseppe Mazza

It is a species linked to the madreporic formations that lives in shallow waters, between 1-16 m of depth, often protected by anthozoans of the genus Acropora that offer a good shelter with their fanciful pointed ramifications or with overlapping horizontal plaques. It loves the calm waters of the lagoons and the coral reefs along the coasts.

The Chrysiptera parasema does not exceed the 7 cm. The body is flattened laterally. The head, small and pointed. The mouth, protractile, is armed with very sharp tiny thin teeth.

The dorsal fin, erectile when it feels menaced, has 13 spiny rays and 10-12soft. The pectoral ones, translucent, have 14-15 rays and are unarmed as the pelvic. 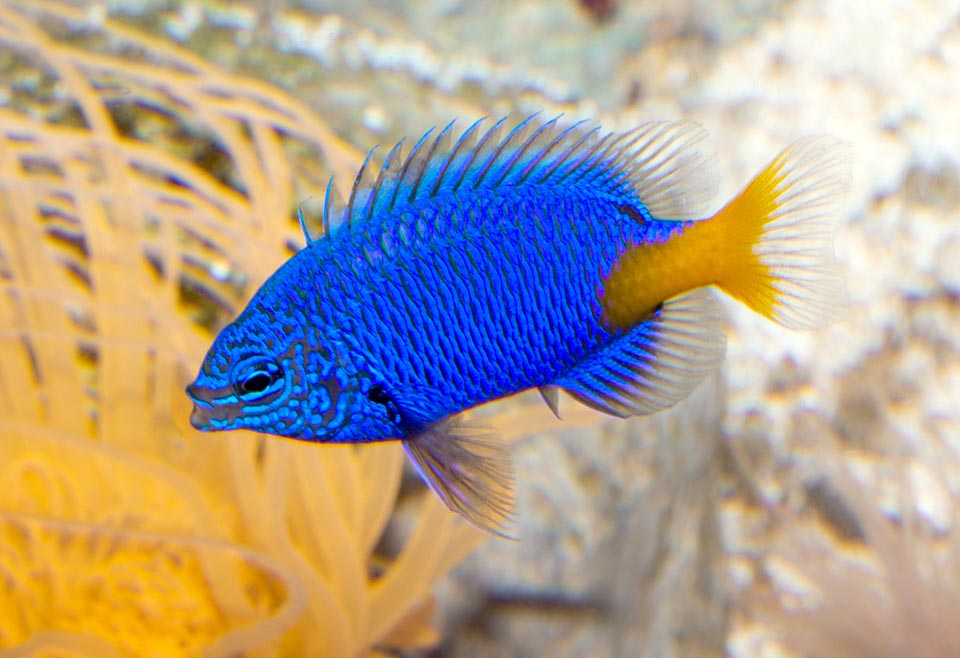 The caudal peduncle and adjacent zones are of a nice intense yellow that contrasts shaply with the glittering electric blue colour of the body and this is the element that characterizes the species distinguishing it from others quite similar, such as Chrysiptera arnazae, Chrysiptera cyanea, Chrysiptera giti, Chrysiptera hemicyanea and Chrysiptera starcki.

We have to add that, depending on the environment and the mood, the fish can lighten or intensify the blue, almost up to the black, when, scared, it hides in a small grotto, and that the scales create iridescent effects.

Also Chrysiptera cymatilis and Chrysiptera springeri have a similar apperance but here the yellow is completely absent.

The Yellowtail blue damsel is a diurnal species practically omnivorous. It nourishes of plankton, algae and small benthic crustaceans it finds among the corals. The adults usually swim alone or in couple, whilst the young move in small schools. 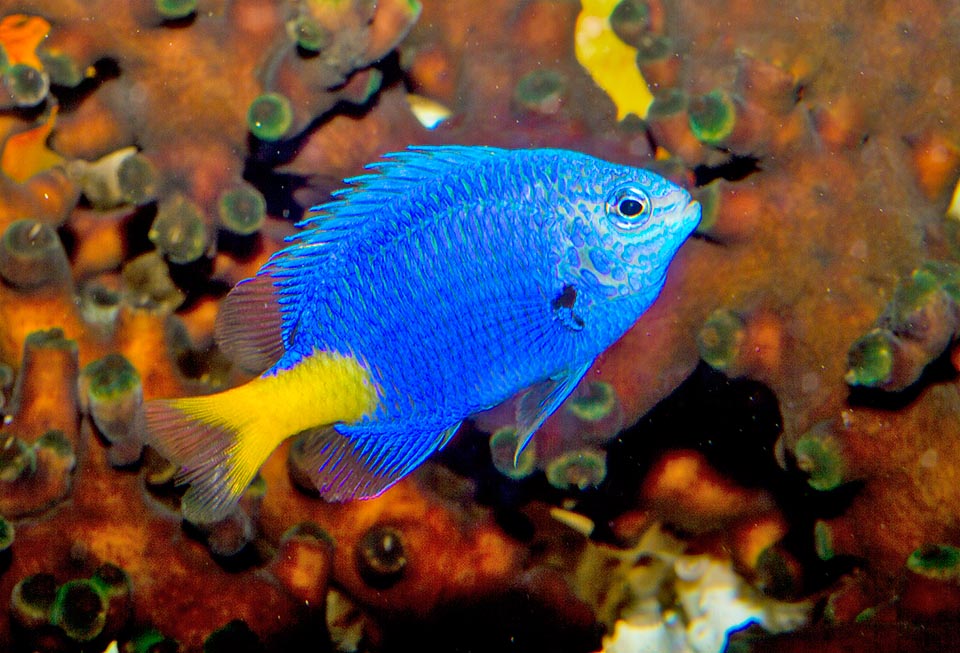 The eggs, surveyed and aerated by the male, are glued to the bottoms. Easy to feed, it reproduces also in modest size aquaria, but then the larvae starve to death © Giuseppe Mazza

The males are territorial. The females may lay even 300 eggs glued to the bottom in a nest surveyed and aerated by the male for 3-4 days, till the hatch.

It is a fish that well adapts to the aquarium life. Easy to feed, it is less quarrelsome and less territorial than other congeners. It couples and can spawn even in pools of modest size, but then the larvae, extremely small, starve to death.

The Chrysiptera parasema is not now (2020) an endangered species. In case of need, the populations may rapidly double in less than 15 months their members and the vulnerability index marks only 14 on a scale of 100.