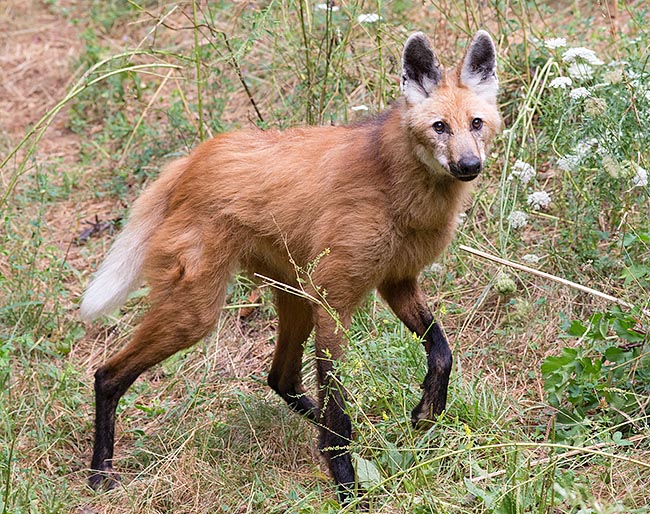 In some ways Chrysocyon brachyurus resembles a fox, but is the tallest canid © Giuseppe Mazza

The name of the genus “Chrysocyon” comes from the Greek “χρυσός (crysos)” = gold and “κύων (kyon)” = dog and means literally “golden dog”.

The name of the species “brachyurus” comes from the Greek “βραχύς (brachys)” = short and “οὐρά (ura)” = tail, referring to the tail, not long, of this animal.

The maned wolf is the biggest South American canid. It is diffused in central and south-eastern Brazil, and occupies part of Paraguay, of eastern Bolivia and of northern Argentina.

Its typical habitat is that of the open savannas and of the prairies, even if partially covered with bushes and scattered trees. In Paraguay, it lives also at the margins of the forests and close to swamps and rivers. 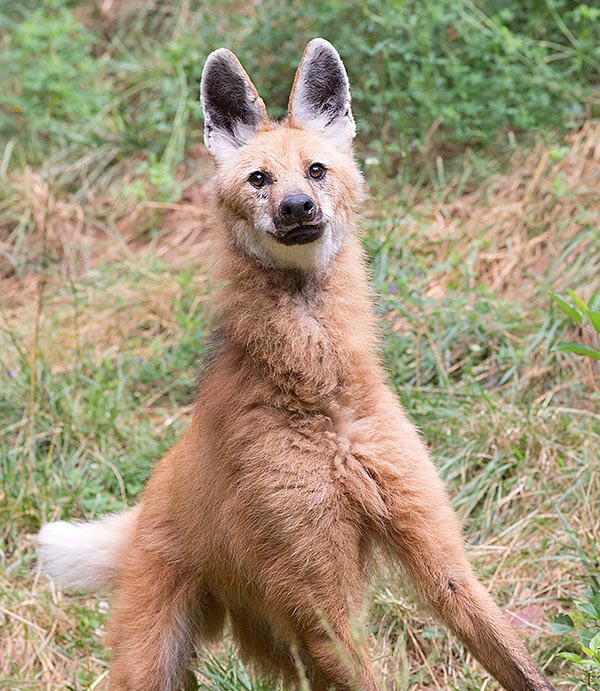 It has a tall, angular, slender shape, and it seems, due to the long legs (it’s the tallest wild canid), and to the gat, as if being on stilts.

It has an average length of about 100-125 cm, a height at the withers of 85-107 cm and a weight of 18-34 kg. The maned wolf has a morbid and fluctuating coat with rather long hairs, of reddish-yellowish-brown colour, more gilded on both sides, with black portions localized at the legs (medium-distal portions), the chin, in a pointed dark spot present at the base of the neck (under the white chinstrap) and in a central line of the back.

The long hair, scarce and black, present on the back (especially in the withers zone), is quite evident so much to gain the species the name of “Maned wolf”.

The mane and the long hairs, along the whole dorsal part of the body up to the tail included, may be showily raised advising about the mood of the animal. By raising the hair the animal looks bigger; this is quite useful if feeling menaced.

White is also an ample spot of the chinstrap (a sort of ample bib). The teeth are in regular number, according to the canids model, but show a particular adaptation of the molars which result being little sharp and rather widened thus indicating an adaptation to a diet with vegetarian integration.

The ears are very large, coated internally by whitish down, and long muzzle, shaded in dark and thin. It has not too bug eyes with brown iris and a bleary look. The appearance of the head, along with the mainly fawn mantle, makes it resembling a sort of a big and tall Fox (Vulpes vulpes). 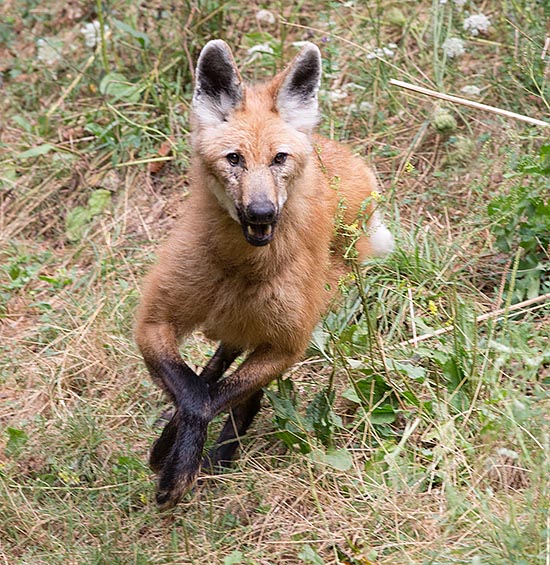 Actually, the maned wolf, from the behavioural point of view as well as the physiological one is closer to the foxes (although belonging to a completely different genus) than to the Wolf (Canis lupus). Recent studies of genetics show that the maned wolf is not strictly related to the other extant canids; it should represent a survived, archaic, species of big extinct South American mammals of the Pleistocene.

The adaptations so much particular of the maned wolf to the open habitat of the savannah where it lives, render it a species with few foes and relatively undisturbed in the well isolated ecological niche where it lives.

The maned wolves live at times in pairs, especially during the brooding of the progeny, other times, in a solitary manner.

They explore the territory where they live looking for generally small and medium-sized preys; the long legs are necessary to allow easy movements in the very high grass of its habitat.

In most cases, the preys are rabbits, wild guinea pigs and other small mammals, lizards, birds, eggs, arthropods, fishes.

Amongst the aliments of vegetal origin, the wild maned wolf nourishes of fruits, berries, tubers, of the fruits of a Palm (Copernicia australis) and of those of the Wild tomato (Solanum lycocarpum). The wild tomato, also called “wolf apple” has curative properties for the maned wolf (it should contrast renal problematics); the plant is actively disseminated thanks to the excrements scattered in the habitat by the animal itself. After some studies, the vegetables may get to form almost the 50% of the diet. 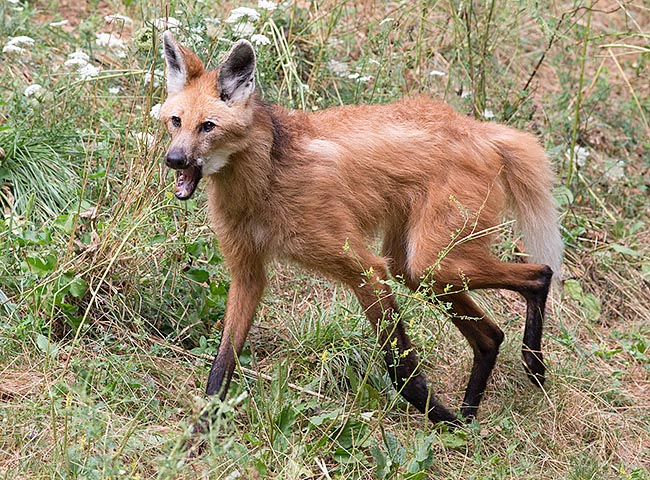 At pace, like giraffes, raises together the legs of the same side © Giuseppe Mazza

The hunting technique of the maned wolf, not living in flocks, is well different from the long pursuits of the wolves and of the African wild dogs, but it does not even totally resemble the cautious researches of the fox: the maned wolf moves slowly among the high grasses of the prairie and as soon it sights a possible prey, seizes it in one shot (sudden leaps), shakes it strongly to stun it and rapidly swallows the prey after having given few bites.

It has mainly night crepuscular habits. The maned wolf moves with a very characteristic gait. When at pace, it raises the two legs of the same side together, shifting the weight on the other two which are standing on the ground.

The consequence is a wavy gait transmitted to the body and which recalls, in small, the gait of the giraffes (Giraffa camelopardalis).

When, on the contrary, it is fully galloping, it can be, for short traits, very rapid.

When running, the rear legs are carried ahead to the front legs allowing the execution of big leaps. As the rear legs are stronger and longer than the fore ones, the maned wolf is also capable to pass with single bound even considerable obstacles. 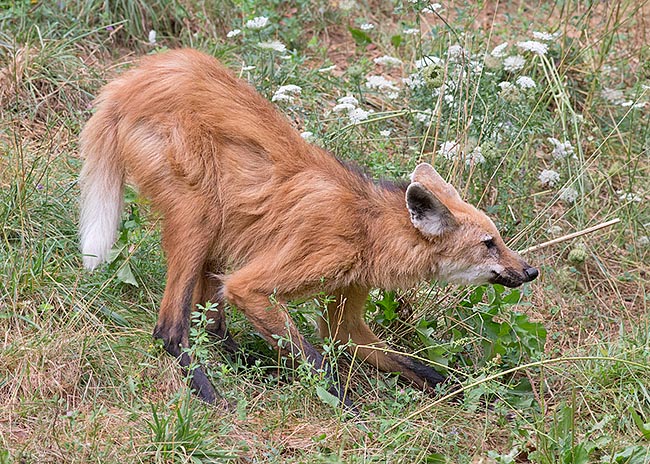 It ambushes small animals, especially rabbits, but vegetables can form 50% of its diet © Giuseppe Mazza

Nevertheless it is not capable to run for long periods. As its hunting technique is not based on the pursuit of the prey but on the finding, surprising and catching it with leaps and seen that it does not have natural enemies to worry it, in this species a great resistance in running has not developed.

For this reason, the maned wolf could be an easy victim of hunters on horseback who should pursue it in the habitat of wide open spaces in the grasslands. The maned wolf does not attack the man, and even if very shy, it does not look to be particularly scared by him.

In a casual meeting between animal and man, usually there are no stampedes but rather behaviours where the intruder is kept at a distance and ignored.

The maned wolf has a very characteristic pungent and unpleasant odour; inside a zoo, for instance, it is quite easy to perceive when we are approaching the zone where it is staying. It is mainly the urine, used for marking the territory, to have the characteristic odour of the species. The pairs can defend territories of some tens of km crossed by paths created by the animals themselves. Beyond the reproductive period, several specimens may meet in the same hunting places if these ones offer the presence of many preys. The gestation lasts little more than two months (65-68 days) and the litter is normally formed by 2-6 newborns. 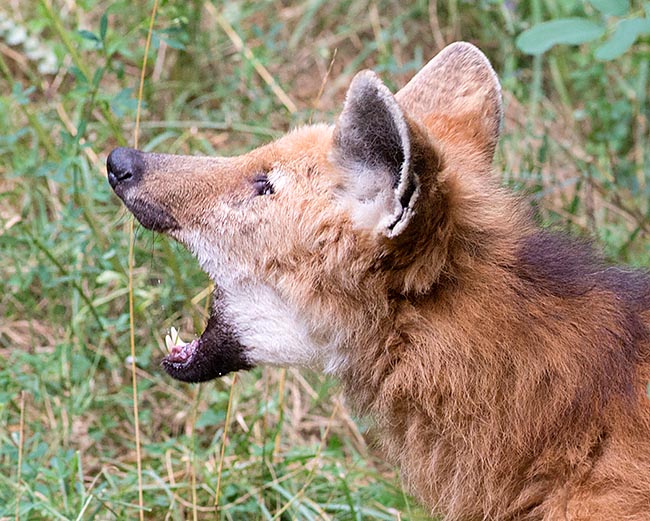 Even if teeth have canids scheme, molars are little sharp, wide and flat © Giuseppe Mazza

The cubs, when young, present a uniform blackish coat. The young are cared by the parents for about one year.

When in captivity, the maned wolves, though keeping aloof and wary, come to accept morsels from the hands of their caregivers. Unluckily, this species has one major enemy: “the man”; it is in fact object of organized and pitiless hunting because deemed responsible of raids against the domestic animals.

The possible domestic preys of the maned wolf consist in specimens of poultry. The species is clearly and dramatically declining in number. But it is not sufficient to promulgate protection laws, ineffective in practical terms, more important are the information and sensitization works by the local persons, particularly to demonstrate the real ridiculous impact of the maned wolf on the livestock, for demonstrating also its non dangerousness and the mildness of its behaviour and for emphasizing and highlighting its utility in containing the rodents populations.

It is important, therefore, that the information and prevention campaigns must be increasingly realized. The species is fairly present in the zoological structures, which have always been keen to count this strange animal in their collections. These specimens, ambassadors of their own species in the world, are now bred in captivity with some success. The maned wolf can reach the age of 13-16 years.