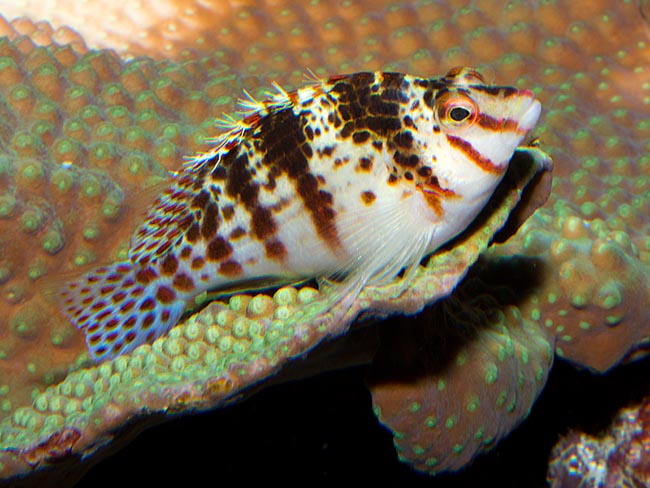 Small but gritty, the males of Cirrhitichthys falco have a territory and a harem © Giuseppe Mazza

The Dwarf hawkfish (Cirrhitichthys falco Randall, 1963) belongs to the class of Actinopterygii, the ray-finned fishes, to the order of Perciformes and to the small family of the Cirrhitidae with 9 genera and 32 species.

The etymology of the genus Cirrhitichthys comes from the Latin “cirrus” = tuft of hair and from the Greek “ichthus” = fish, with a reference to the small tufts which may be noted on the spiny rays of the dorsal fin.

The name of the species “falco” = hawk n Latin, reminds that this fish more than swimming, it darts and stays perched per hours, like a raptor, on the branches of the madrepores, ready to jump in a dive on the preys.

It lives in the tropical waters of the Indian and Pacific oceans. We find it, indicatively, at the Seychelles Islands, the Maldives, in Australia, in Indonesia, in New Guinea, in Micronesia, at Palau, in the Philippines, Taiwan and in the southern part of Japan. In the southern hemisphere, it reaches New Caledonia, the Fiji Islands, the Samoa Islands, and the Archipelago of Tonga.

It is a benthic animal, at home in the madreporic formations up to 40 m of depth. 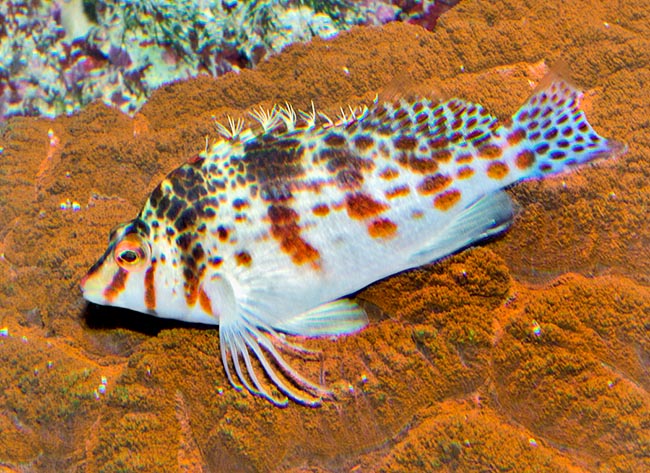 Measures just 7 cm. Typical the tufts on the back and the pectorals free rays for moving among corals © G. Mazza

The head, with longer snout than the oxycephalus, seems almost a beak, but are present small teeth, bent inwards, for holding the preys. The mimetic livery foresees some lined red and brown spots with more or less vertical bands of the same colour. There is no swim bladder, but this is of no use, seen that it spends most of the time motionless, moving only the eyes looking for an easy prey.

The dwarf hawkfish nourishes greedily of small fishes and crustaceans. It is a protandric hermaphrodite species: that is, all the individuals are born female, but can then, ageing, change sex. Each male has a small hunting territory, that it defends from the competitors, allowing the entrance only to females. When it dies, contrary to what happens in the world of the Amphiprion, here is the biggest female changing sex and so inherits the small harem. This is however a less rigid scheme because, when the members are less numerous, it may also happen that an impatient female becomes male before the time, ousting the ruler in office with furious fights.

Master in mimetism, it observes the vicinity to plunge swooping, like a hawk, on passing by minnows and small crustaceans. Unlike Amphiprion, where males may turn into females, here it’s the biggest female that, upon the sovereign death, quickly changes sex inheriting the harem © Giuseppe Mazza

The matings take place, with spread fins, with showy jumps up to 60 cm from the bottom and the fecundation on the fly of the planktonic eggs. Seen the vast distribution and the fact that it has practically no foes, the vulnerability index of the Cirrhitichthys falco is very low: only 10 on a scale of 100.