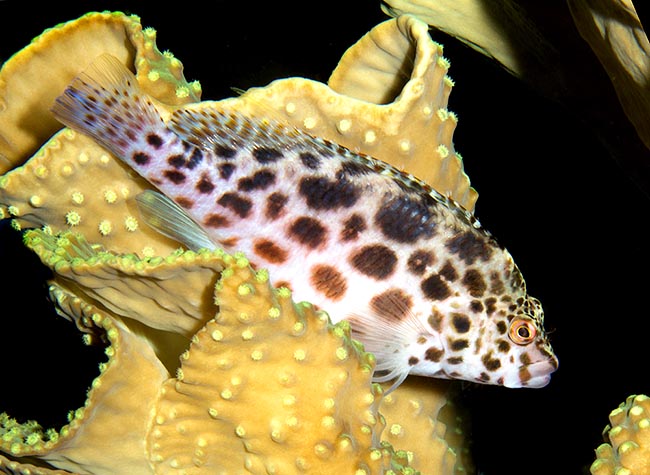 The Coral hawkfish (Cirrhitichthys oxycephalus  Bleeker, 1855) belongs to the class of Actinopterygii), the ray-finned fishes, to the vast order of Perciformes and to the small family of Cirrhitidae with 9 genera and 32 species.

The etymology of the genus “cirritichthys” comes from the Latin “cirrus” = tuft of hair and from the Greek “ichthus” = fish, with a clear reference to the small tufts present on the spiny rays for the dorsal fin and close to the nostrils.

The name of the species “oxycephalus” comes from the Greek “oxys” = pointed and “kefale” = head, with reference to the head, pointed in comparison with the squat body.

The Italian name has to deal with its behaviour. It recalls, in fact, that it swoops down on the preys like a hawk, and then disappears like a goblin thanks to its rapid movements and its camouflaging design.

Like Oxycirrhites typus, which belongs to the same family of the Cirrhitidae, the Cirrhitichthys oxycephalus has a very vast diffusion area interesting both sides of the Indo-Pacific. 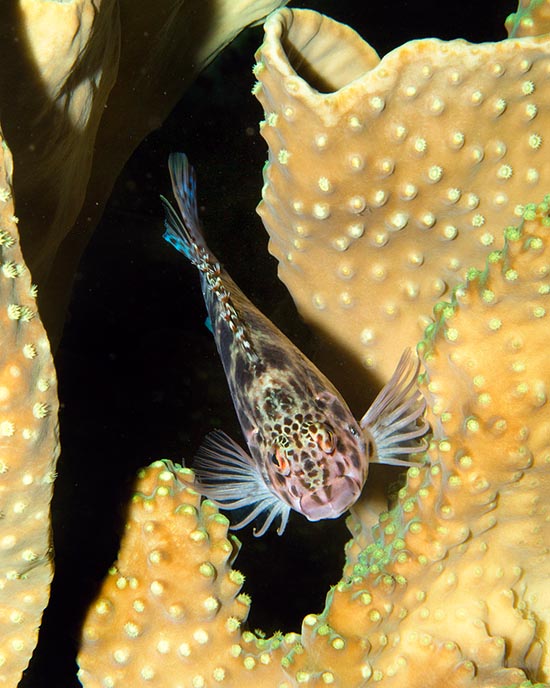 We find it along the African coast, from South Africa to the Red Sea, and then indicatively, at the Maldives Islands, in Australia, Indonesia, New Guinea, Micronesia, Philippines, Taiwan and the southern part of Japan. In the southern hemisphere, it reaches Tonga and New Caledonia, eastwards, the Galapagos and the American continent. In fact, it is at home in southern California, in Mexico, Guatemala, Nicaragua, Costa Rica, Panama and Colombia.

It lives on the bottom, between corals and madrepores in the lagoons and along the slopes of the reefs up to 40 m of depth.

The rather stocky body does not exceed the 13 cm.

The head, with two curls behind the nostrils, shows solid fleshy lips and small teeth bent inwards, for holding the preys.

The mimetic livery foresees some reddish spots, more or less lined and decreasing towards the tail, which interest also the lips and most of the fins.

There is no swim bladder, but this is of no use, seen that it spends hours and hours motionless, moving the eyes only, more than swimming, it proceeds by fast leaps.

The Coral hawkfish nourishes greedily of small fishes and small crustaceans. It is a protandric hermaphrodite species: all the individuals come to life as females, but then may, ageing, transform in males. 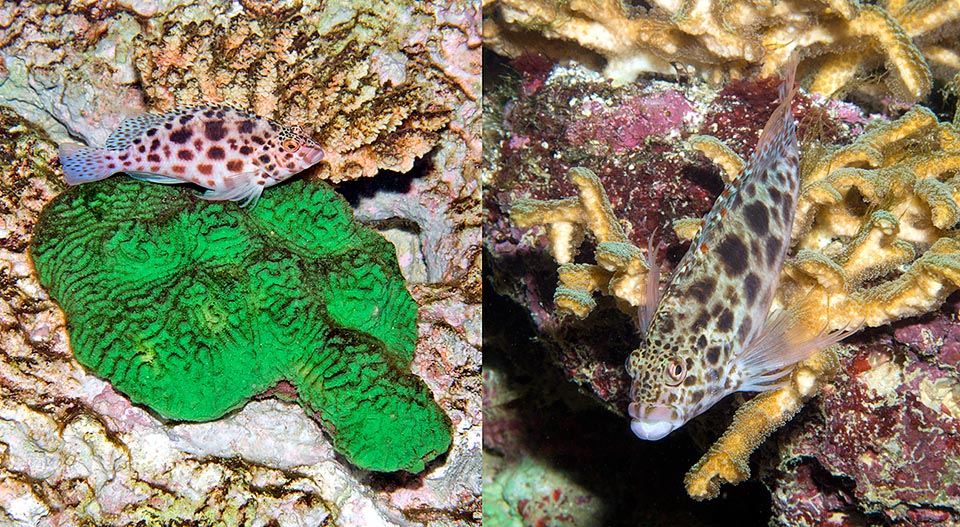 It always finds the way of mimetism. The swim bladder is absent, but is of no use. For a nice meal good eyes and solid flesht lips with bent inside teeth are sufficient © Giuseppe Mazza

These ones, rather territorial, have a small harem. The marriages take place at dawn with showy leaps from the bottom and the fecundation on the fly of the planktonic eggs. Seen the vast distribution and the fact that it has practically no foes, man included, the vulnerability index of the coral hawkfish it is very low, marking only 10 on a scale of 100.