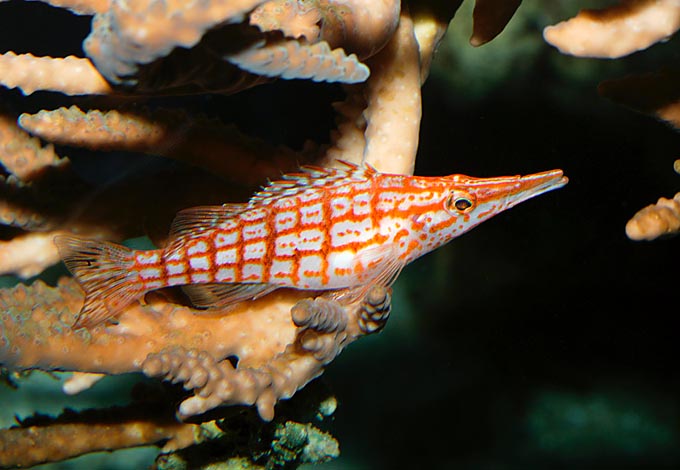 Oxycirrhites typus has no swim bladder, useless because hunts in ambush jumping on the preys © Giuseppe Mazza

The small and unusual Longnose hawkfish (Oxycirrhites typus Bleeker, 1857) belongs to the class of Actinopterygii, the ray-finned fishes, to the order of Perciformes and to the little family of the Cirrhitidae, which counts 9 genera and 32 species.

The etymology of the genus has two possible interpretations.

For some, the term “oxycirrhites” should come from the Greek “oxys” = acute, pointed and from the Latin “cirrus” = curl, due to the spiny rays of the dorsal which have a small wavy filament.

For others, reference is to be done to “oxys” = acute, pointed and “cirrhitus” the name of a genus of fishes belonging to the same family: less known species such as the Cirrhitus atlanticus and the Cirrhitus albopunctatus, often bigger ones such as the Cirrhitus pinnulatus or the big Cirrhitus rivulatus which reaches the 60 cm. “Cirritus”, in Latin “with the curl”, comes in any case in its turn from “cirrus”. Therefore, it is a “fish with tuft having pointed snout”.

The name of the species “typus” means in Latin “picture, image, type”. It is, in fact, the only and typical species of this genus.

The Oxycirrhites typus has a very vast diffusion area interesting both sides of the Indo-Pacific. Just to give an idea, we find it along the African coast from South Africa to the Red Sea, the Seychelles, Mauritius, Réunion and Maldives, in Australia, Indonesia, New Guinea, Micronesia, Philippines, Taiwan and in China up to the southern islands of Japan. In the southern hemisphere it reaches Tonga and New Caledonia, eastwards, the Hawaii, the Galapagos, southern California and the coasts of Mexico, Guatemala, Nicaragua, Costa Rica and Colombia.

It lives on the bottom, between the corals and the madrepores, oblivious of the backwash and of the currents, along the outer slopes of the reefs up to 100 m of depth, mostly in ambush between the branches of the gorgonians and the corals of the genus Anthipathes. 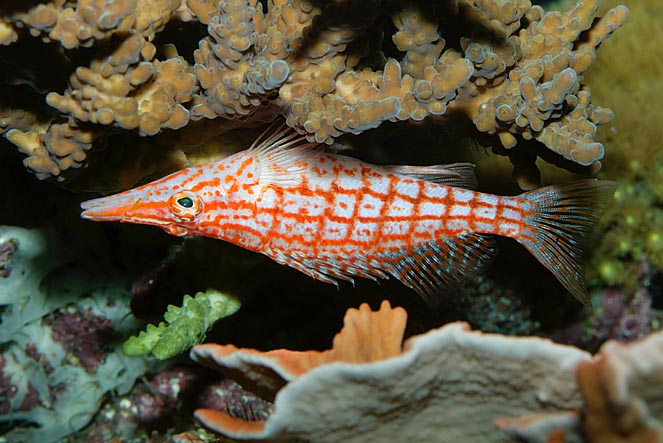 The body, oval and compressed on the sides, can reach, counting also the snout, the 13 cm, but rarely exceeds the 11 cm.

The snout, shaped like tweezers, has tiny teeth facing inward for holding the ill-fated, and the red chequered pattern with dots reveals extremely mimetic among the branches of the gorgonians which have the same colour. The swimming bladder is absent, but this is not of use, seen that it spends hours and hours motionless on its observatory and more than swimming it proceeds with lightening fast jumps, often coming back, with the prey in its mouth, more or less to the starting point. And when the operation fails, it can climb also on top of the gorgonians thanks to the digitiform rays of the pectoral fins.

The Longnose hawkfish nourishes mostly of the planktonic crustaceans passing close, but it seems also of small fishes. It is a protandric hermaphrodite species: that is, all the individuals come to life as females, but can, later on, while ageing, transform into males. The reproduction is a matter of pair or of group. The eggs, planktonic, are released in the sea also collectively, with jumps, at about twenty centimetres from the bottom, whilst the male, or the males, fecundate them on the fly.

Seen the vast distribution and the fact that practically it has no foes, man included, the vulnerability index of the Oxycirrhites typus is unbelievably low: only 10 on a scale of 100.