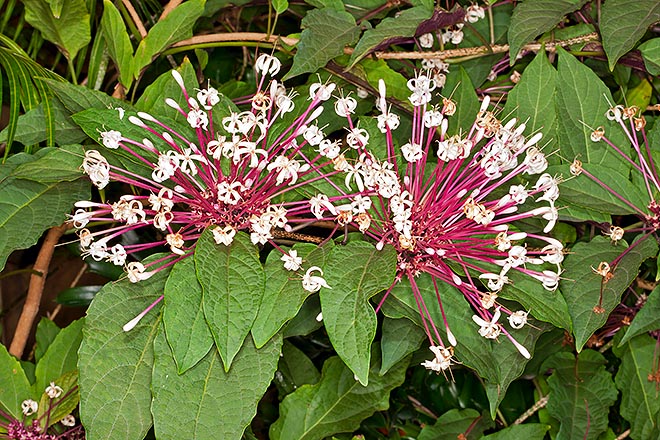 The species is native to New Guinea and the Philippines, where it grows in the forests and in disturbed areas, at low and medium altitude.

The name of the genus is the combination of the Greek terms “kleros” = fate and “déndron” = tree, name given by Johannes Burman (1707-1780), taken by Linnaeus, to a plant which, in Sinhala language was called “pinnacola” = ill fated; the name of the species comes from the combination of the Latin epithets “quator” = four and “loculus” = loculus, with reference to the quadrilocular ovary.

Clerodendrum quadriloculare (Blanco) Merr. (1905) is an evergreen or semi-deciduous shrub of fast growth, up to about 5 m tall, with branches having an almost quadrangular section. The leaves, on a 3-8 cm long petiole, are opposite, simple, from ovate to oblong with pointed apex and wavy margins, of 15-25 cm of length and about 6 cm of breadth, of opaque dark green colour on the upper page, glossy purple below.

Inflorescences, between winter and spring, in terminal globose cymes of 15-30 cm of diameter carrying a crowd of flowers with corolla having five curved petals, oblong-elliptic, about 1,5 cm long, white or pink white, on a thin, pink, 5-8 cm long, tube. Varieties have been selected having foliage variegated of green, cream and yellow.

The fruits are are ellipsoid quadrilobate drupes, 1-1,5 cm long, violaceous, with persistent red calyx about 1 cm long, containing four seeds (one per each lobe).

It easily reproduces by seed, woody cutting and by root suckers, by means of which it expands rapidly; for this reason, in some tropical countries it is considered as a major pest. Species of undoubted ornamental value, for the foliage as well as for the spectacular flowering, but tendentially infesting if not kept under control, cultivable in the tropical, subtropical and marginally warm temperate climate zones, in sheltered position, where it can stand for a very short period temperatures as low as about -2 °C with damage to the foliage, some degree less with loss of the aerial part, but usually it grows again from the roots in the following spring.

It requires a full sun exposition for an optimal growth, it bears also partial shade, but with more expanded habit and less abundant and shorter lasting flowering, the soil must be well draining, rich of organic substance, acidic or neutral, kept humid, even if well rooted plants can stand short drought periods. It can be utilized as isolated specimen or for realizing fences and barriers or grown as a tree; in fact, it stands well the prunings, to be done in spring after the flowering. Cultivable also in pot, in an as much as possible luminous position, with the soil having the abovementioned characteristics, the waterings must be frequent in summer, less in winter leaving the substratum to partially dry up before giving water again, with lowest temperatures preferably over the 14 °C.