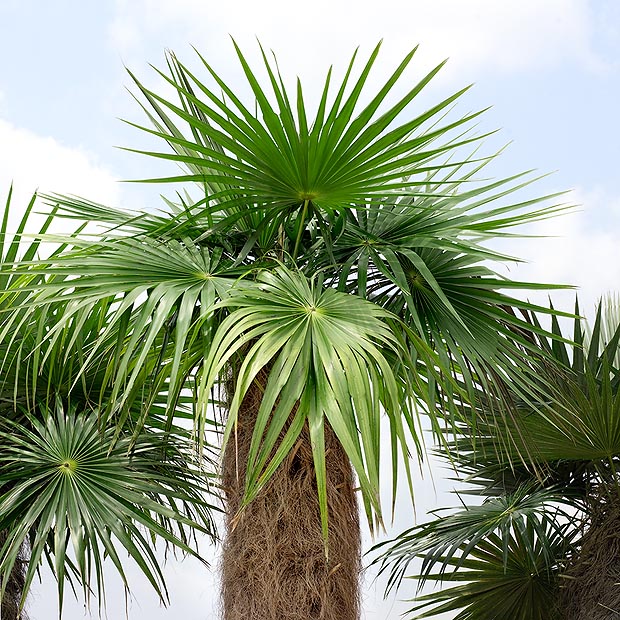 At risk of extinction in the wild, Coccothrinax crinita is luckily tilled in the gardens © Giuseppe Mazza

The plant is native to Cuba where it grows in the savannahs, from the sea level up to about 300 m of altitude on mostly serpentinous soils (arid grounds, poor of nourishing substances and rich in magnesium and heavy metals, toxic for most of the plants).

The Coccothrinax crinita (Griseb. & H.Wendl. ex C.H.Wright) Becc. (1908) is a monoecious plant with single stem which may reach the 10 m in the oldest specimens in the wild, but which, in cultivation, keeps lower, with a diameter of 10-20 cm; the stem is covered by the long fibres of the foliar base, of light brown colour, forming a thick and intricate mass which make it look much more robust.

The leaves, on a 0,6-0,8 m long petiole, are palmate, of a glossy intense green colour on the upper page, green grey below, with an almost circular shape with lanceolate segments, long at the centre up to 1 m and united at the base for a length of about 25 cm, initially rigid, then slightly pendulous at the extremity. The inflorescences emerge between the leaves, are up to about 1,5 m long, almost erect, ramified, carrying hermaphrodite flowers of a cream white colour. The fruits are globular or pyriform, of 1-2 cm of diameter, black when ripe, and containing one seed only. It reproduces by seed, which germinates in 3-4 months; the growth is somewhat slow.

It is one of the most characteristic palms due to the entangled mass of thin and long fibres wrapping the trunk all along its length, except the base of the oldest specimens or those particularly exposed to the wind. It is suitable to tropical and subtropical climates, marginally also to the warm temperate ones; as a matter of fact, it may resist, for short time, to temperatures as low as -3 °C. It requires a full sun exposition or, at the most, a slight shade, even poor soils, provided perfectly draining, preferably alkaline, but it adapts to the neutral or slightly acidic ones; well rooted plants can resist to drought periods, even if it profits of regular watering in the warmest periods, avoiding in any case water stagnations as these might reveal deleterious.

Due to its moderate dimensions, it is suitable also to not too vast gardens, where it may form a focal point; furthermore, it has a good resistance to the saline aerosols, and so it can be utilized close to the sea. In past times and in the origin areas, the leaves were utilized for covering huts and makeshift shelters. In the wild, this plant is nowadays to little specimens and is considered as endangered. Luckily, due to its ornamental characteristics, it is cultivated, though not extensively, elsewhere.