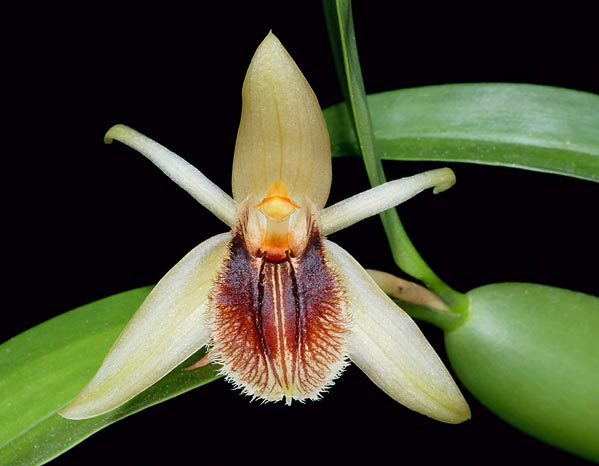 The species is native to Assam, Bhutan, Borneo, Cambodia, central-southern China (Fujian, Guangdong, Guangxi, Hainan, Jiangxi, Xizang and Yunnan), India, Laos, Malaysia, Myanmar, Nepal, Sumatra, Thailand and Viet Nam where it grows, epiphytic, on the trees in the evergreen forests or as lithophytic on calcareous rocks along the rivers banks, between the 500 and the 2300 m of altitude.

The Coelogyne fimbriata Lindl. (1825) is an epiphytic herbaceous species with a thin creeping rhizome from which start, spaced of 2-5 cm, some pseudobulbs, from ovoid to ellipsoid, 2,5 cm long and of about 1 cm of diameter, with at the apex two oblong or elliptic leaves with acuminate apex, 5-10 cm long and about 2 cm broad.

Terminal inflorescences in autumn, from the most recent ripe pseudobulb, 5-10 cm long and carrying 1-2 (rarely 3) flowers of 3-3,5 cm of yellow-pale green colour, but the labellum which is striated of brown red; the flowers, which are slightly perfumed, open successively. The sepals are lanceolate with pointed apex, about 2 cm long and 0,6 cm broad, the petals, almost filiform, are 2 cm long, the labellum, trilobate with ciliated margins, is 1,5-2 cm long and 1,2 cm broad, with erect lateral lobes and central lobe run almost entirely by two corrugated lamellae; the column, arcuate and laterally winged, is about 1,3 cm long. The flowers last 2-4 weeks. The fruits are obovoid capsules of about 2 cm of length and of 1 cm of diameter.

It reproduces by seed, in vitro, and by division, with each section provided of at least 3-4 pseudobulbs.

It a species of easy cultivation and with a long lasting flowering, requires high luminosity, but without direct sun, with temperatures from cool to average. In summer, during the vegetative period, it requires frequent waterings and high atmospheric humidity, 70-85%, in way to remain almost constantly humid, but without stagnations; under these conditions it may bear maximum temperatures even little over the 30 °C.

In midwinter it needs a short resting time, allowing to well dry between waterings, with minimum temperatures around the 10-12 °C, even if in some origin zones there may be, occasionally, temperatures values close to the 0 °C; a good air movement is essential in all seasons.

Rainwater, water obtained by reverse osmosis or demineralised, is to be utilized for the waterings and the nebulisations; the fertilizations, duly distributed in way to avoid salts accumulations, are to be done during the vegetative period, preferably with hydrosoluble balanced products, with microelements, at ¼ dosage of what suggested on the package.

It may be mounted on a raft of cork or on roots of arborescent ferns, if a high atmospheric humidity can be maintained, or cultivated in low and ample pots or baskets, in way it can expand freely, with much draining compost, which may be formed by fragments of bark with possible addition of charcoal, sphagnum, agri-perlite or coir. It does not like to be disturbed, therefore the repottings are to be done only when strictly necessary and in the moment when the new roots do appear.