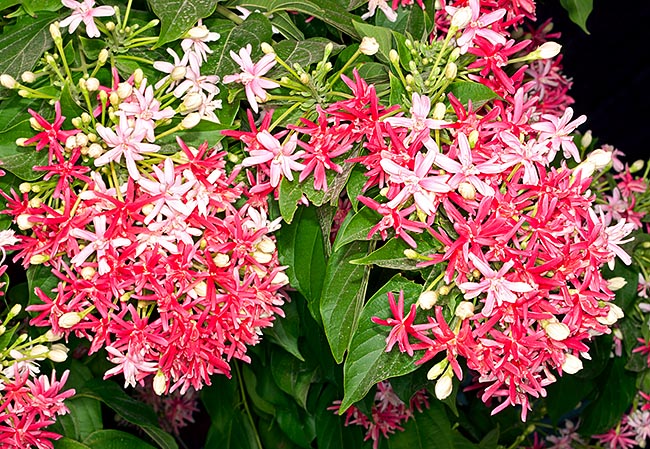 The species is native to Africa: Angola, Benin, Democratic Republic of the Congo, Ghana, Ivory Coast, Mali, Nigeria, Sierra Leone, Tanzania, Togo and to Asia: Bangladesh, Cambodia, China (Fujian, Guangdong, Guangxi, Guizhou, Hainan, Hunan, Jiangxi, Sichuan and Yunnan), India, Laos, Malaysia, Myanmar, Nepal, Papua New Guinea, Philippines, Singapore, Sri Lanka, Taiwan, Thailand and Vietnam, where it grows at the margins of the humid forests, in the thickets and along the water streams up to about 1500 m of altitude.

The name assigned to the genus goes back to that used by Pliny the Elder to designate a species we have not been able to identify due to its incomplete description; the name of the species is the Latin adjective “indicus, a, um” = of India, referring to one of its origin locations.

The Combretum indicum (L.) DeFilipps (1998) is an evergreen sarmentose shrub or woody climber, or deciduous in the coolest climates, up to 10 m long, with tomentose young branches. The leaves are simple, opposite or sub-opposite, oblong-elliptic with pointed apex and entire margin, 4-16 cm long and 2,5-8 cm broad, covered by brown tomentum when young; the petiole, 0,5-1,5 cm long, tomentose, persistent, after the fall of the leaf hardens transforming in a sort of a curved spine which facilitates the anchoring to the supports. Inflorescences, on 2-6 cm long peduncle, terminal and axillar, loose, 5-10 cm long, carrying numerous sessile hermaphroditic flowers of about 3,5 cm of diameter, with greenish villous tubular calyx, 5-9 cm long, with 5 triangular, 2-3 mm long, lobes, corolla at the apex of the calyx with 5 obovate to oblanceolate petals with rounded apex, 1-1,6 cm long and 0,5-1 cm broad, initially white but quickly turning pink and dark red, and 10 stamina. The flowers are initially erect or horizontal, then drooping, and emit a pleasant fragrance especially during the night hours; the first night, when white, are visited by sphingids, in the following days by bees and sunbirds. The fruits, rarely produced outside the origin zones, are fusiform capsules, indehiscent, pubescent, 2,5-3,5 cm long and of about 1 cm of diameter, with 5 longitudinal, 1-2 mm broad, wings initially red, then blackish brown when ripe, containing only one pentagonal dark seed.

It reproduces by seed, in sandy loam maintained humid at the temperature of 22-24 °C, by cutting, rather difficult to root, using a portion of woody stem with 3-4 nodes, by layering and root suckers.

Vigorous species with copious and spectacular blooming, practically continuous in the tropics, cultivable in full sun, or at most with slight shade, in the tropical, subtropical and marginally warm temperate climate zones, where adult plants can bear values of temperature around the 0 °C, with possible loss of the aerial part, only if exceptional on of short duration. It is not particular about the soil, provided the same is well drained, but grows best and blooms abundantly in those rich of organic substance; the waterings must be regular and abundant, especially in the initial growing phase, with high temperatures and in absence of rains, then well rooted may bear short periods of dry. Wit appropriate drastic pruning it can be grown as a shrub or as climber on robust railings or pergolas. A variety with 10 or more petals, the ‘Flore Pleno’ has been selected.

Various parts of the plant are utilized in the traditional medicine of various populations, in particular the Chinese one.