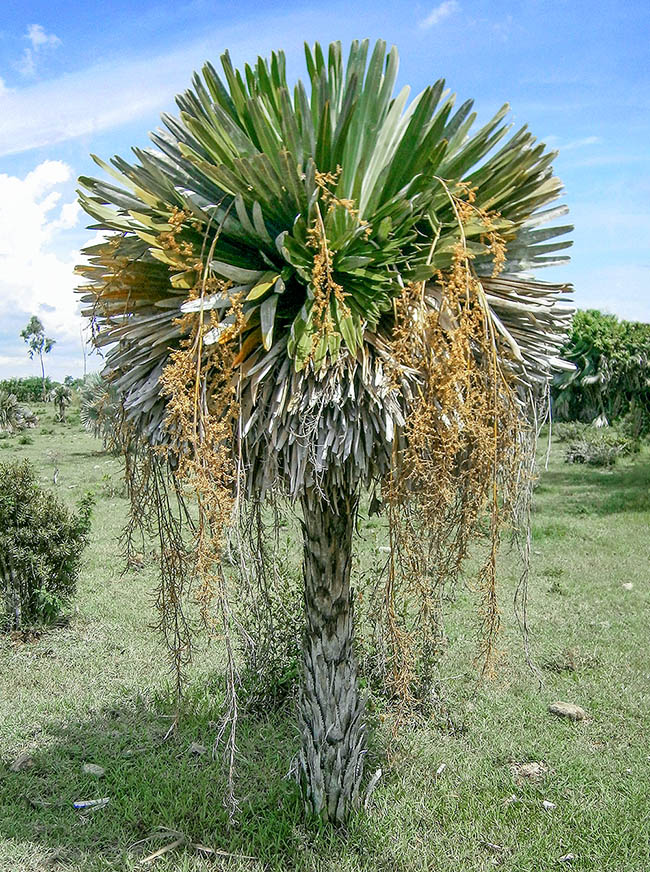 At risk of extinction, Copernicia cowellii is a species endemic to Cuba © Duanny Suárez

Copernicia cowellii Britton & P.Wilson  is endemic to the province of Camagüey in the eastern part of Cuba. It is distributed in the inner savannahs on serpentine soils.

Copernicia cowellii is a small palm, the smallest of the genus Copernicia, very slow in growth, with solitary cylindrical stem that may reach up to 3 m, up to 17 cm broad and of pale grey colour, usually covered by the dry leaves that persist for a long time forming a thick mass wrapping the stem.

The foliage is very compact because the petioles of the leaves are short, 10-20 cm long and 3-4 cm broad, and consequently the leaves are very close together, almost difficult to distinguish.

The petioles have small thorns irregularly arranged on the borders.

The leaves of the juvenile form have a wedge shape, but when the plant reaches maturity, they become orbicular.

The foliar lamina is rigid and coriaceous, covered by wax, and divided by about half in straight segments with unarmed edges and round and blunt apex. The outer foliar segments may have small thorns on the borders.

The inflorescence emerges between the leaf bases and extends beyond the leaves. It is up to 2 m long, and very ramified, with rachillae up to 4 cm long and 21,5 cm broad covered by a thick down.

The flowers are hermaphrodite, yellow and perfumed, up to 6 mm long, arranged on the rachillae in groups of two spaced 2/3 mm from each other. Each flower is wrapped by small sharp bracts bent backwards and has the corolla covered by a thick down on the outer side.

The fruits are produced in great abundance and are oval, 15 mm long and 13 mm broad, black when ripe. They contain only one ovoid seed about 12 mm long. It reproduces by seed that germinates easily in 1-3 months. 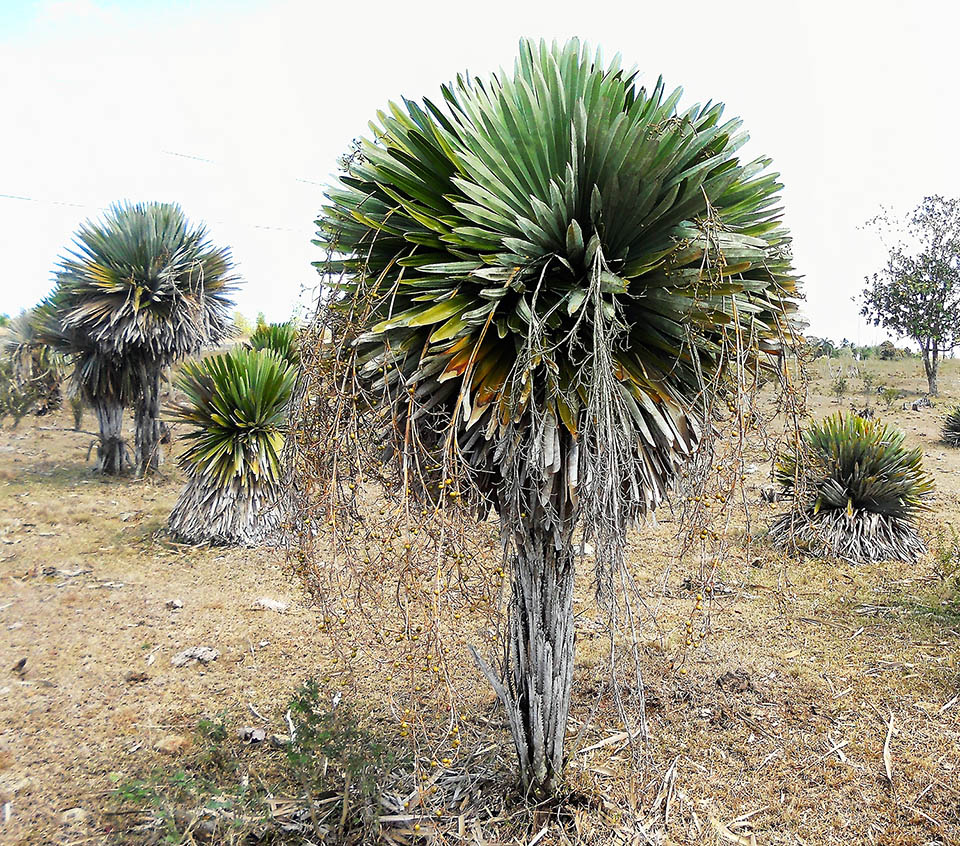 This species is closely related with Copernicia hospita with which shares partially the habitat, and from which distinguishes only for the smaller size, probably due to the particular typology of the soils where it lives. The two species hybridize naturally in the environments where both live and the hybrid is known as Copernicia x shaferi. Occasionally it hybridizes also with Copernicia macroglossa, on the common territories, and in this case the hybrid is known as Copernicia × dahlgreniana.

Copernicia cowellii is still a palm poorly known in cultivation, even if it is diffused since the late 90’s, and can be admired only in a few botanical gardens and private collections. It would deserve a greater diffusion because of its original appearance and the contrasting colours of its leaves.

Its cultivation is not easy and quite often the cultivated specimens present various typologies of nutritional deficiencies, probably caused by the particular mineral composition of the serpentine soils where it grows, difficult to reproduce in cultivation. It can be cultivated in a vast variety of climatic zones, from the tropical one to the warm temperate, where it stands even short frosts up to -2/-3 °C. 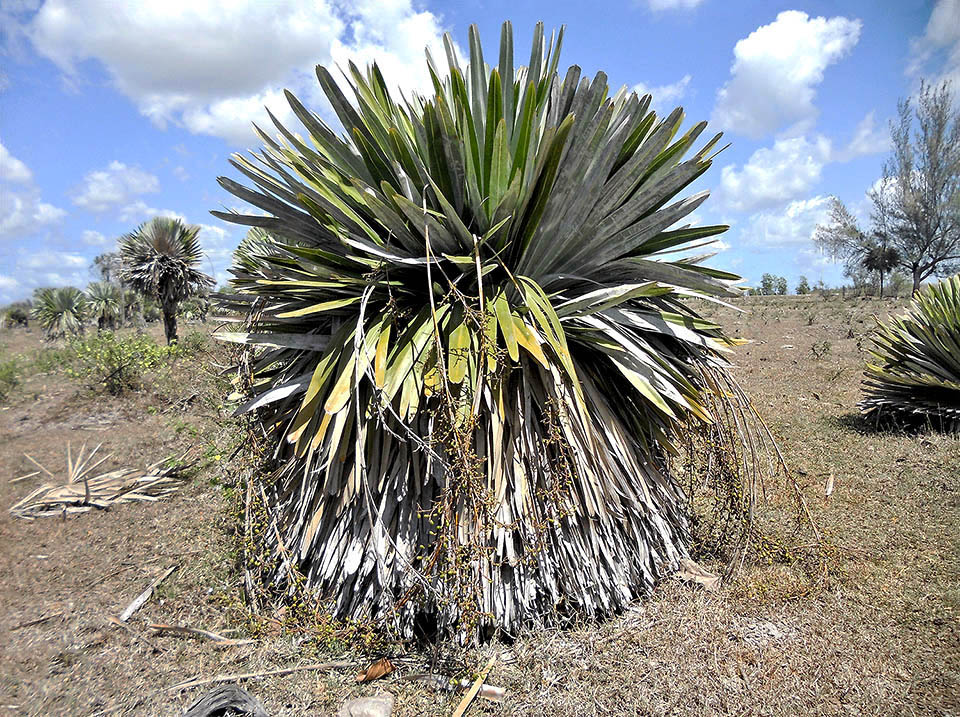 Young specimen with ripening fruits. The growth is very slow and initially the leaves cover completely the stem © Duanny Suárez

Copernicia cowellii is a very slow growing palm, certainly among the slowest known palms, and even in the tropics it can produce averagely two leaves per year. The young plants must produce a robust and deep root system before being able to form the stem.

In cultivation they have measured the growth rate of the plants that amounts to 40 cm in 20 years. It prefers the full sun exposure and if cultivated in the shade produces darker and even bigger leaves. It must have well-draining soils and tolerates drought very well.

The populations of the origin region utilize the stems of the palms as fence posts and the leaves as roof coverings or for heaving hats and baskets.

Copernicia cowellii is classified “Critically endangered”, species in critical danger, by the International Union for Conservation of Nature (IUCN) due to the distribution concentrated in territories now isolated by the expansion of the cultivated fields and by the fires that often occur in the nearby areas.

No synonyms are recognized for this species.