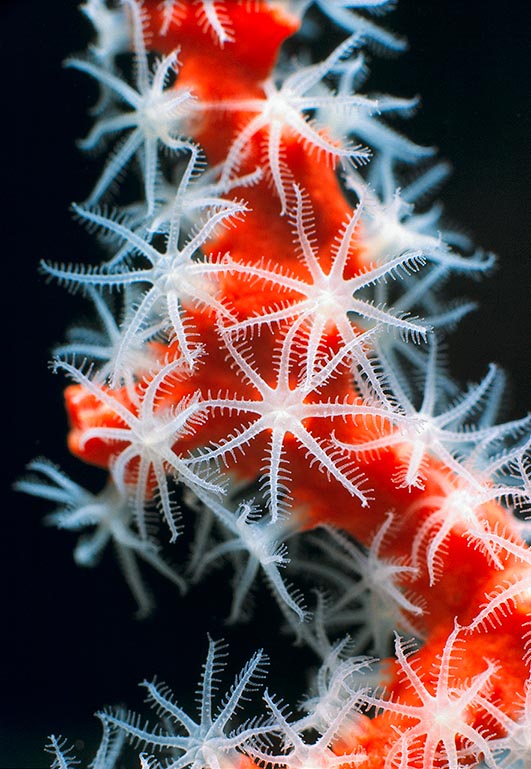 The Red coral, rightly Corallium rubrum Linnaeus (1758), is a colonial animal of the phylum Cnidaria, class Anthozoa. It belongs to the subclass Octocorallia, as holding eight tentacles Alcyonacea, suborder Scleraxonia, family Corallidae. Corallium rubrum is without any doubt the most famous amongst the corals, and the only member of its genus in the Mediterranean Sea. It is known since ancient times, and since ever utilized for producing precious jewelry, so much to have won the name of “red gold” in Italy, and “precious coral” in English.

Corallium rubrum is considered as an endemic species to the Mediterranean Sea, and is also the only species of its genus present in the basin. Besides the whole Mediterranean in a bathymetry included between the 20 and the 600 metres, its range extends beyond Gibraltar Strait: southwards on the African western coasts up to Senegal, nortwhards along Spain and Portugal coasts. As its bathymetry is very vast ant it loves the grotto environments, it is not rare that new areas thickly colonized by this species are discovered.

Corallium rubrum is a typically sciophilous species, from the Greek σκιά (skià) “shade” and -philous, who loves. As a matter of fact, luminosity is one of the main factors limiting its extension, along with current and substrate gradient.

In particular, being the Corallium rubrum a sessile species, the only way it has for feeding is that of exposing itself in the best manner to currents rich of organic particles, from which is able to filter the nourishment. Moreover, it is a species badly suited to sudden changes of temperature, and in order to obviate this problem it usually prefers to settle on bathymetries keeping under the seasonal fluctuations.

When it finds the suitable conditions, however, like ample grottoes or steep slopes, Coralliuum rubrum is able to massively occupy the available surface, thus forming one of the richest biocenoses in the Mediterranean, second only to the prairie of Posidonia oceanica as for species richness.

Among the various organisms getting shelter among the branches of the red coral colonies, we can find various molluscs, such as the murex snail Ocinebra paddeui in the Sardinian colonies, or the more common gasgtropod Pseudosminia carnea that feeds on gorgonians and lays the eggs on the branches, and crustaceans, such as the decapod Ballssia gasti.

It’s a sessile colonial species. The polyps, passive filtrators, retreat in case of danger into the coenosarc, the spongy tissue hosting them, then get out again hunting plankton © G. Mazza

Being a rich biocenosis, the Corallium rubrum one attracts also other organisms that simply take advantage from the present diversity for nourishing, or that are attracted by the same biophysical conditions, such as poriferans, bryozoans, polychaetes and other octocorals and hexacorals.

As already mentioned, Corallium rubrum is a sessile colonial species and is a passive filtrator.

The polyp of the colony is generally very similar to that of Cerianthus membranaceus, or to that of a jellyfish, that are, on the contrary, not colonial cnidarians.

Each polyp, of a bright white colour, has the possibility to expand, up to about 5 millimetres, or to retire inside the coenosarc when feeling menaced. It structure foresees eight tentacles in the oral part, having the function of seizing the food.

The inner structure of the polyp is very simple, and substantially includes only one gastric cavity subdivided in eight portions by mesenteric septa, that correspond to the tentacles of the outer portion.

The polyps are rightly inserted with their aboral portion into the so-called coenosarc, a spongy tissue connecting all the polyps of the colony. In its inner margin, the coenosarc is crossed by a series of longitudinal grooves where are located the gastrodermic tubules, in turn connected with the gastrovascular cavities of the single polyps, thus generating a system of transportation of the alimentary substances along the whole colony.

The strong bright red colouration, of the central axis as well as of the coenosarc, that contributes to making the coral so much precious, is given by the presence of carotenoids partly assumed during the feeding.

The morphology of the colony is typically ramified, and the ramifications may grow along all planes, but usually the arborescences expose in a transversal way to the main current, thus to facilitate the catching of the food by the polyps.

The intensity of the colouration varies from the pink to the intense red, and usually indicates the origin population.

The size of the colonies is highly influenced by the fishing: the most superficial ones are a few centimetres tall, whilst the deep ones may exceed even the 50 cm, today actually rather rare. The growth rate of the colony is variable, but in any case fairly low: 2 to 6 millimetres per year (a 50 cm branch might be more than 200 years old).

The use in the production of precious objects of the inner skeleton of Corallium rubrum, characterized by a bright red colouration and by a consistency that renders it workable, had done of it an object of fishing since the old times: roughly shaped pearls of coral have been found in tombs dating back to the Mesolithic.

Sumerians, Greeks and Romans used the red coral as jewel and as charm and still now it is utilized for the production of jewelry and decorative objects to which in the past were conferred magical powers.

Fishing of Corallium rubrum was done by means of a tool made by iron bars intersected like a Saint Andrew Cross and of a net, that towed by a boat tore the colonies of their housing.

Due to the intense exploitation of this ressource, nowadays the fishing is ruled and can be done only through catching by means of authorized underwater operators.

On the trophic point of view Corallium rubrum is a suspensivorous. In particular it mainly nourishes of planktonic small organisms and is able to absorb also dissolved organic matter. The catching is facilitated by the presence of mucus covering the tentacles: after the contact, the tentacles retract and submit the particle to tactile analysis. Then the ingestion follows or the expulsion of the prey. 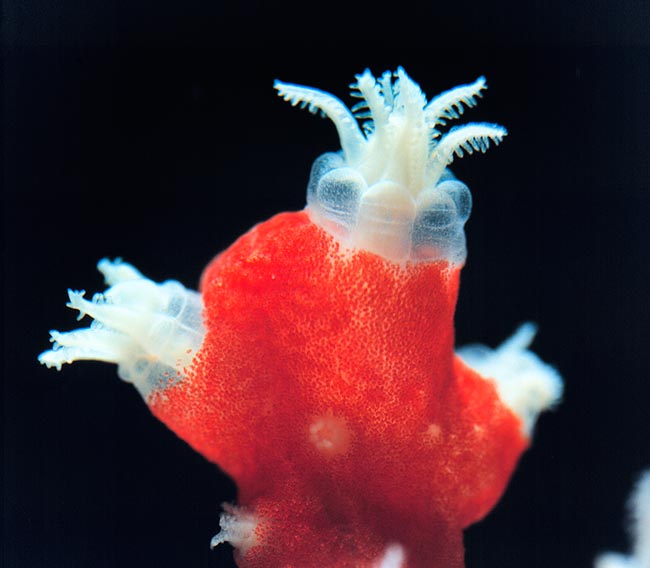 Closeup of opening polyps. A thick net of grooves crosses the coenosarc to carry the food also to the misplaced members of the colony. The backbone generates from the fusion of calcite crystals © Giuseppe Mazza

The tentacles can elongate and originate a filament three times longer than the tentacle itself.

During the catching the filament contracts and shortens, spirally wrapping under the point of contact with the alimentary particle.

Breathing takes place via direct exchanges with the water of oxygen and carbon dioxide, and the nervous system is simple, formed by a net of nervous cells, and without specialized cells.

Corallium rubrum reproduces mainly by sexual way, whilst the asexual way, typical to the simplest Phylum, has been only hypothesized, though never observed amongst the colonies. The sexes are separated at the polyps level. The female and the male gonads are immersed in the tissues of the mesenteric septum and separate from these ones as soon as they reach the maturity.

Female and male polyps can be recognized thanks to the shape of the mature gonads: the oocytes are roundish and pale yellow whilst the male ones are milky white, elongated and have irregular shape.

The maturation of the gonads follows a seasonal cycle and takes place in a different way in the two sexes: the cycle of the oocytes accomplishes over a two years period and in each reproductive season coexist two populations of oocytes, a mature one, bigger, and one in maturing stage. The male gonads, conversely, follow an annual cycle: the development begins in autumn-winter and ends in summer. 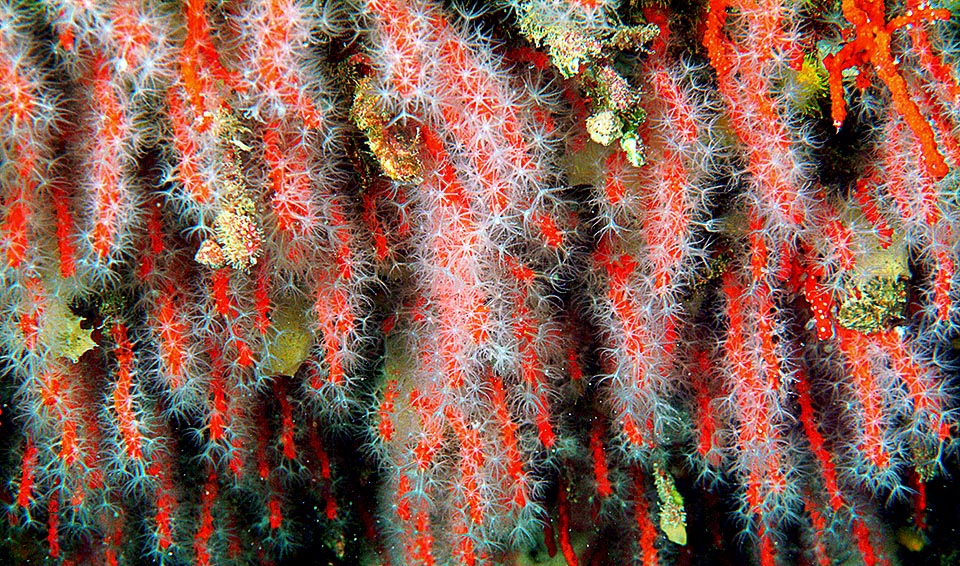 Sciophilous, Corallium rubrum grows between the 20 and the 600 m of depth, often hanging from the ceiling of the grottoes in dense colonies. It is ill-suited to the thermal changes, even if seasonal, and ramifies on more planes for better intercepting the currents. The growt is slow: 2-6 mm per year. 50 cm specimens are at least 200 years old © Gianni Neto

After the emission of the male polyp, the spermatozoa navigate in search of the female polyp in a still unknown attraction mechanism, until when they find and fecundate it. The fecundation takes place in the gastrovascular cavity of the female polyps, where stays the mature oocyte.

The young planular larva develops during the first 20-30 days before going out to the full seas. Thanks to the cilia it has, the planula looks for the place where to settle for developping a new colony. It has been observed how the settlement prefers the bottoms already colonized by corraligenous (a biocenosis typical to rocky bottoms dominated by calcareous organisms). 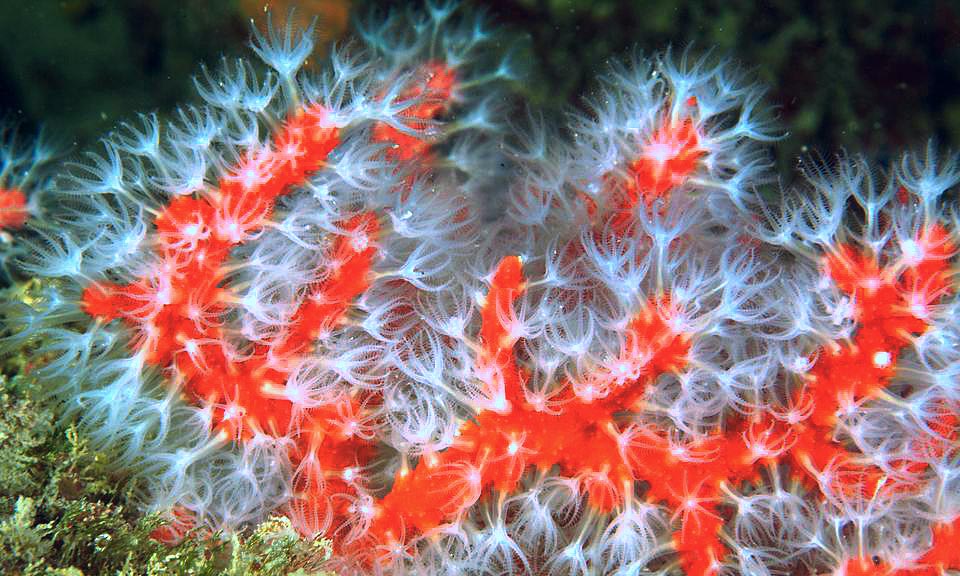 Due to the intense red colouration, due to the carotenoids assumed while feeding, it is the most famous coral, used since old times for jewels © Gianni Neto

After about one month since the settling, the planula develops into the first polyp of the colony. Although in literature is reported an age of reaching the sexual maturity included between seven and the ten years, more recent works have shown proved that the minimum ages of maturation are higher, between the 17 and the 21 years.