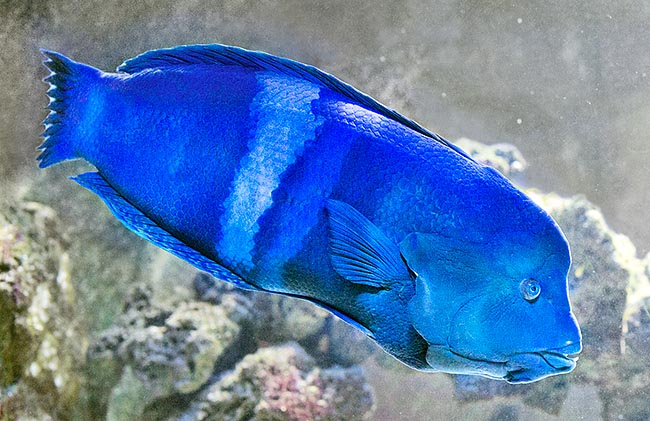 The Clown coris (Coris aygula Lacepède, 1801), belongs to the class of Actinopterygii, the ray-finned fishes, to the order of Perciformes and to the family of Labridae.

The name of the genus comes from the Greek “kore” which rightly means girl, young girl. Actually, due to its thin scales, the slender and elegant look and the bright colours, this fish well evokes images of beauty.

The name of the species “aygula” = which in Sanskrit means finger, thumb and penis, refers to the first two rays of the dorsal, which erect taller then the others.

In the synonym Coris angulata, used till short time ago, reference was made to the angular profile of the head of the adult males.

It has very vast distribution in the tropical waters of the Indian and Pacific oceans. 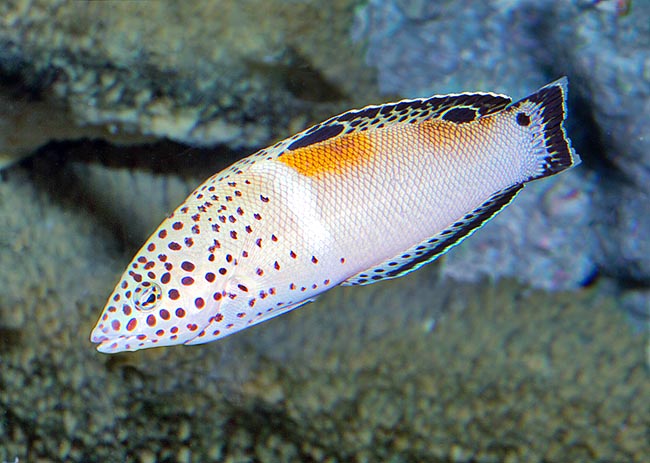 Who would guess? This is sub-adults livery. There is only a pale vertical band in common © Giuseppe Mazza

As an indication, we find it from South Africa to the Red Sea, the Seychelles, Mauritius Réunion, Maldives, India, Sri Lanka, Australia, Indonesia, Micronesia, New Guinea, Palau, Philippines, Taiwan, China and the Ogasawara Islands in southern Japan. Eastward, it has colonized the Fiji Islands, Samoa, Tonga, Pitcairn and Ducie. Southward, in the Pacific, it has colonized New Caledonia, Lord Howe and Rapa Island.

It lives in the coralline formations, in relatively shallow waters, up to about 30 m of depth.

The clown coris can reach the 120 cm. The shape, elongated and compressed on the sides is typical of many Coris and Thalassoma, but the size of the adults, which may reach the 120 cm of length, is really surprising. 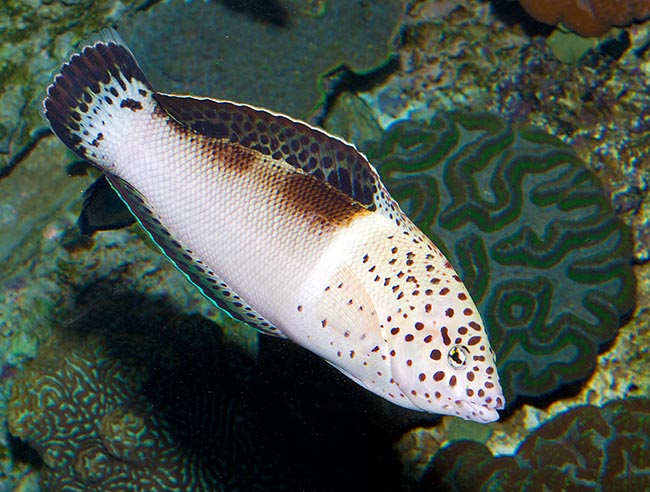 The livery of the adults is greenish blue with one or two paler vertical bands. The juveniles are white with small black spots in the fore part of the body and two orange spots in the back flanked, on the adjacent fin, by two great black ocelli. Later on, growing, the small black spots turn reddish and the background colour turns beige, but the centre where takes form a pale vertical band, that in hindsight is the only link with the adult livery. It is not astonishing, therefore, that, even accepting the well known variability of the wrasses, synonyms have generated.

The clown coris nourishes mainly of benthic animals: echinoderms, crusta- ceans and molluscs it seizes and easily breaks thanks to its showy protruding incisors. It often finds them by removing the bottom with strong jets of sand.

It is thought that it is, like many wrasses, a protogynous hermaphrodite species, that is with females who may turn males starting from a certain age. Little is known about its reproductive modalities, also because it is a rare animal with only 1-2 individuals per hectare. Its resilience, that is the capacity of recovering the losses caused by the events, is very low. It needs at least, in fact, 14 years, n optimal conditions, for doubling the number. The vulnerability index is consequently very high, 72 on a scale of 100, and there is good reason for worrying because the monitoring is scarce and no protective measures have been taken. 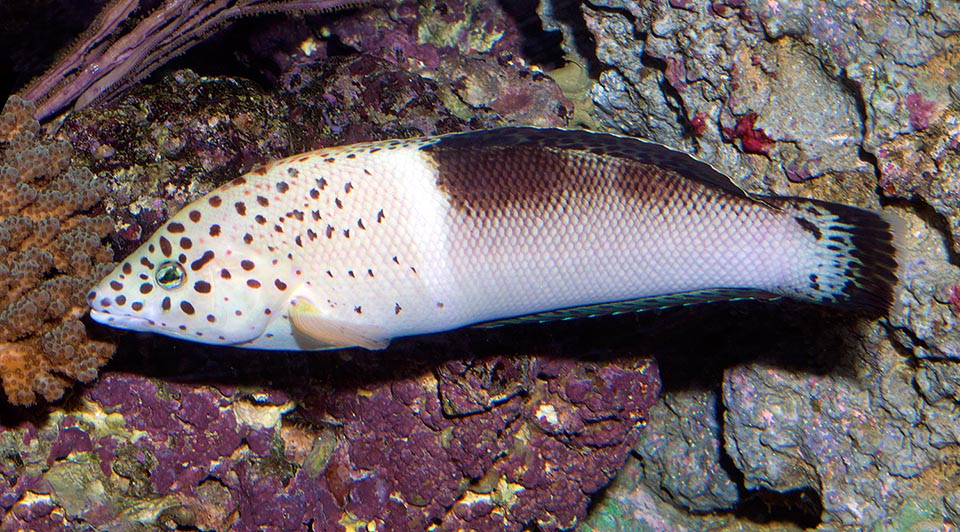 It is thought to be a protogynous hermaphrodite species, that is, with females that may turn into a male once reached a certain age. Its reproduction is poorly known because of a scarce monitoring due to its density (1-2 individuals per hectare). Its vulnerability index is very high and no protective measures have been taken © G. Mazza