The Coris gaimard (Quoy & Gaimard, 1824) belongs to the class of the Actinopterygii, the ray-finned fishes, to the order of the Perciformes and to the numerous family of the Labridae.

The generic name Coris seems to come from the Greek “Κόρη” (kore) that means maid, young girl, due to the elegant look, with thin scales and the bright colours, that well correspond to the images of beauty present in all species of this genus starting from the Mediterranean Coris julis, that, not by a chance, has the vulgar Italian name of Damsel.

The specific term gaimard, honours the memory of the French physician and naturalist Joseph Paul Gaimard (1793-1858).

The range of the Coris gaimard has its epicentre in the tropical Pacific Ocean, along the Asian coasts and of Oceania. However, we find it already in the Indian Ocean starting from the Cocos Islands, west to Australia, and reaches then, eastwards, the French Polynesia and the Hawaii. Indicatively, it touches the south of Japan, China, Taiwan, Malaysia, Indonesia, Papua New Guinea, Australia, New Caledonia, Fiji, Samoa and Cook Islands. 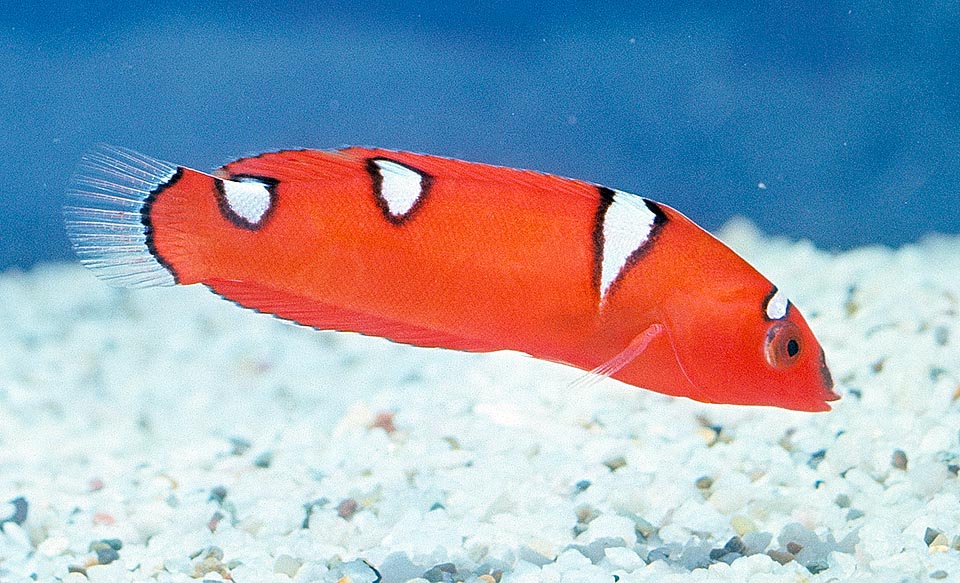 At the first youth stage, the bright livery of the Coris gaimard is practically the same as the one of the Coris formosa © Giuseppe Mazza

It loves the flat bottoms with fragments of old madreporic formations, places rich of hideouts for its usual preys it looks for between 1 and 50 m of depth, but also those with sand or gravel where the juveniles disappear silting at the first sign of danger.

Even if the current size is of about 20 cm, the adult males of the Coris gaimard can reach the length of 40 cm after incredible morphological and livery transformations. It is in fact a proterogynous hermaphrodite species, that is with females that while growing transform in males and it is therefore obvious that, seen the age, these are bigger than the partners. However, it does not happen like in other species of Labridae, where are diandrous males, that is as such from the birth, even if camouflaged by a female livery. At the beginning, then, the Coris gaimard are all females. During the first times the juvenile livery is quite similar to that of the Coris formosa: very slender bodies, orange red with 5 spots bordered in black arranged like a saddle on the back. Then, growing, the yellow tail appears, which differentiates, at first sight, all the phases of this species. 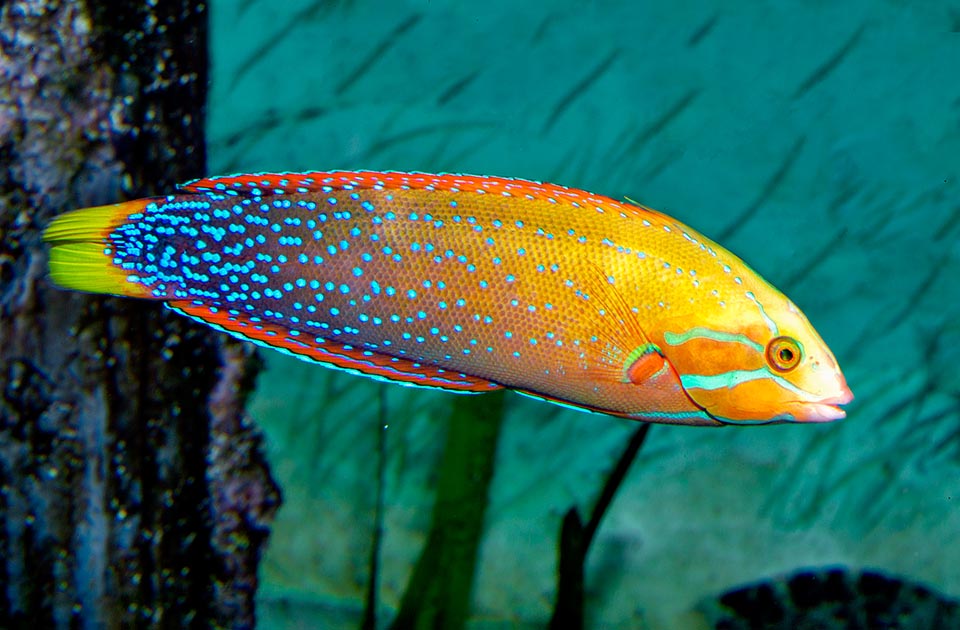 The male livery shows a considerable sexual dimorphism. Without prejudice to punctuation, the background colour fades towards the tail from the green to the blue and the belts on the operculum are wider and emerald. At times these drawings and the punctuations are less evident and the hues flatten under a dark purple veil, but apart dimensions and the height of the body, there are no misunderstandings because is always present a characteristic yellowish vertical belt, more or less wide, that seems to cut the fish in two parts. The first caudal is also for the males of a nice bright yellow, constant characteristic of the species rightly vulgarly called “Yellowtail coris” in various English speaking countries.

The juvenile phases nourish of zooplankton, tiny crustaceans and amphipods, but when the solid incisors get out, the Coris gaimard can easily break the armours of crabs, gastropods and bivalves, their diet gets more substantial. They have been even filmed on a bottom while raising with their teeth and turning upside down voluminous madreporic fragments to swallow small sea urchins that were thinking to be safe on the hidden side. 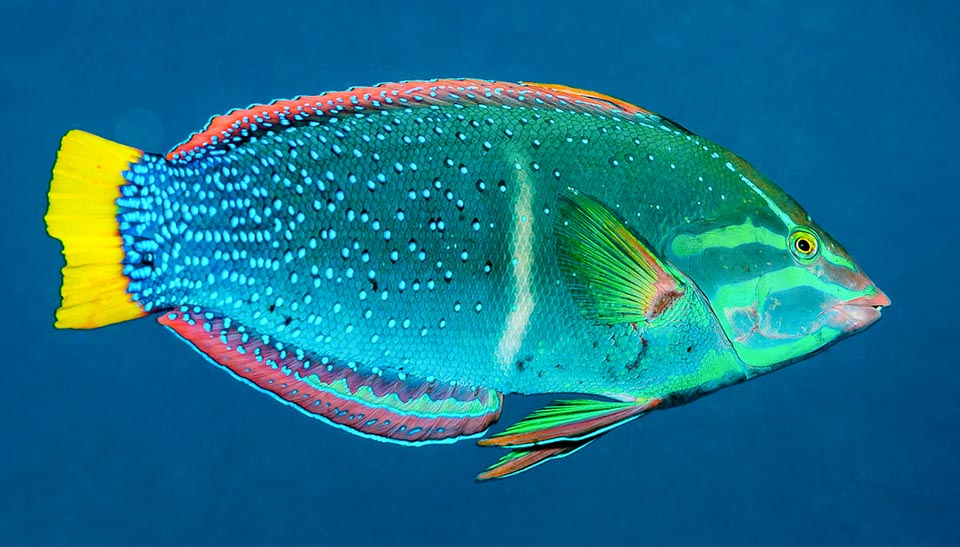 The males even 40 cm long, are big females changing sex for reproductive necessities assuming the command of a small harem © Francois Libert

It is a diurnal species. The dominant males control a group of females and when the one in charge is ready to spawn they go up together towards the surface for the mating. The eggs produced during the nuptial swim, with the female placed under the male, are abandoned to the currents and the larval status lasts about 45 days.

The young, like those of Coris formosa, well adapt to the life in aquarium and are frequent hosts in the wide pools of the public aquaria, but due to their frantic digging activity and the dimensions of the adult badly befit to the domestic walls.

In addition to the traps for furnishing the aquaria it is a fish that often gets into the nests, consumed locally with the risk of a serious food poisoning, called ciguatera, caused by the presence of poisonous organisms in their diet. In any case, it is not an endangered species, because the resilience is good, with a possible doubling in 1,4 – 4,4 years of the populations decimated by the events, so much that nowadays (2020) their vulnerability index is still moderate, marking 38 on a scale of 100.