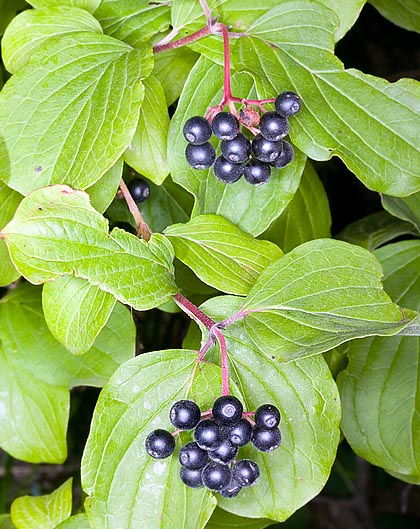 The Cornus sanguinea L. (1753) is a species of the family of the Cornaceae widespread in Europe and in Asia Minor.

In Italy, it is found in the whole territory up to about 1500 m of altitude. It is a little rarer in the Mediterranean area.

It is common in the woods and in the hedges, often accompanied by oaks and hornbeams. It prefers deep and fertile soils, of calcareous nature and can form veritable thickets thanks to the abundant multiplication through basal shoots.

The epithet of the species “sanguinea” refers to the crimson colour the leaves get when the autumn approaches.

Also the bark of the branches is reddish, especially those more exposed to the sun.

The Italian common name “corniolo” comes from the Latin corneolus = corneous, and refers to the hardness of the wood, which, in fact, is utilized in the production of tools.

This species forms up to 4 m tall shrubs, with elongated branches, flexible and glabrous when ripe.

The leaves are opposite, oval, entire, with 3-5 pairs of central and arcuate, nervations, convergent towards the apex.

The flowering takes place from April to June. The flowers, of 8 to 12 mm diameter, are formed by 4 white petals. They are united in 4-5 cm long clusters. The fruits are drupes having the size of a pea, of black-bluish colour, containing a stone with two seeds. 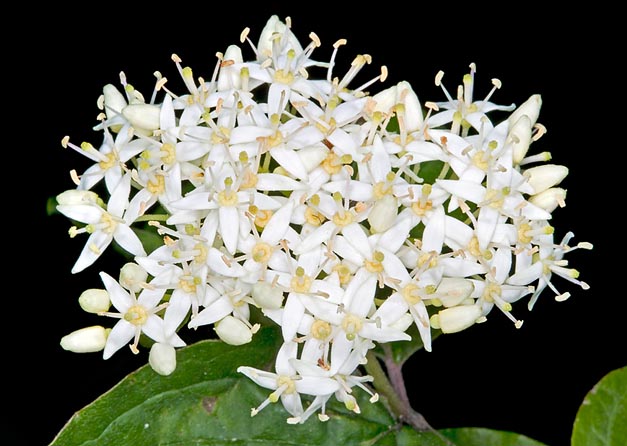 They are very much appreciated by the birds, which, in this way, ensure the spreading of the species.

Bark and Fruits are utilized in the popular medicine because containing several active substances (tannins, resins, quercitin in the bark, pectins, organic acids in the fruits). The properties are astringent, anti-inflammatory, cicatrisive, and lenitive.

The fruits of the dogwood are not edible due to their unpleasant taste.

However, they are utilized in the treatment of gastroenteritis and heartburns due to their astringent power.

They may be also employed for mouthwashes and gargles when treating ailments of the gums and of the throat.

Their pulp contains a colouring substance. From the seeds, they can get oil used also in the soap industry.

→ To appreciate the biodiversity within CORNACEAE family please click here.