The species is native to Peru (Loreto Region) where it grows as epiphytic in the pluvial forests at low altitudes.

The name of the genus is the combination of the Greek substantives “κόρυς” (corys) = helmet and “ἄνθος” (anthos) = flower, with reference to the helmet-shaped appendix of the labellum (epichile); the name of the species is the combination of the Latin terms “verruca” = wart and “lineatus, a, um” = lined due to the presence of a line of crimson warts on the lateral sepals.

The 10-12 cm disturbing flower is a cruel trap for a male of a bee of the Euglossa genus. They land attracted by the smell and end up in a well, seen in profile in the cebtral photo, full of liquid preventing them to fly. Plodding, they follow a set path for bearing at the exit the pollinia they will carry to the stigma of an analogous sadistic flower. Obviously, the Euglossa, as often is the case for men, are not able to treasure experience. A classical example of evolutive adaptation at cost of the animal world © Mazza

The Coryanthes verrucolineata G.Gerlach (1989) is an epiphytic species with ovoid fleshy pseudobulbs, close each other, deeply grooved, provided with 2-3 plicate, papery, oblong-elliptic leaves with pointed apex. 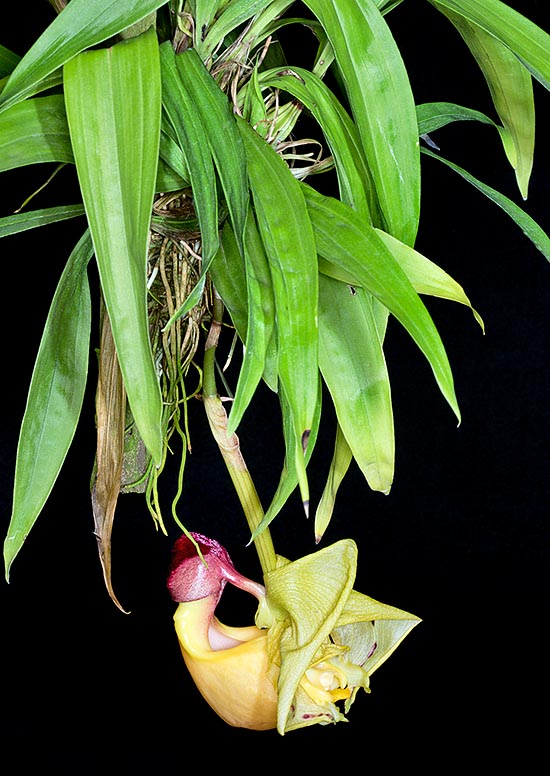 Lateral racemose inflorescences from the base of the pseudobulbs, drooping, 15-20 cm long, carrying 1-4 flowers of 10 x 12 cm with very particular and complex shape in function of the pollination.

The lateral sepals are big and waved, membranaceous, of yellowish colour, the petals, narrower than the sepals, are falcate, curved, membranaceous, the labellum is tri-parted, composed by a concave part, called hypochile, formed by the lateral lobes, of yellow colour with frontal purplish short down, by one side intermediate semi-tubular, mesochile, and by the epichile, shaped like a cup, containing a sugary liquid that drips just before the opening of the flower from two organs placed on the sides of the column.

The particular structure of the flower is an example of pollination adaptation done by insects, especially the males of a bee belonging to the genus Euglossa (Latreille, 1802), attracted by the smell emanated by the hypochile.

The insect, falling into the epichile full of liquid, cannot go away flying due to the wet wings and the only way for getting out is a narrow passage between the border of the epichile and the column, from which it takes off, during the passage, the pollinia, that, during the visit to the following flower, are transferred on the stigma. It reproduces by seed, in vitro, and by division, with each section provided with at least 3-4 pseudobulbs.

Species rare in the wild and practically unknown in cultivation, with the intensely perfumed characteristic flowers, lasting 5 days. It requires a semi-shaded position, high temperatures in summer, 22-32 °C, slightly cooler in winter with lowest values not under the 15 °C, and constant high humidity, 65-85%, along with a continuous air movement.

Regular and abundant waterings, but without stagnations, during the growth period, more reduced during the vegetative stasis, but without ever allowing the substratum to dry up completely. For the waterings and the nebulisations is to be used rainwater, demineralised or by reverse osmosis, whilst for the fertilizations, to be done during the vegetative period alternated with the waterings, is better to use balanced hydrosoluble products, with microelements, at ¼ of the dosage shown on the package. It is to be preferably cultivated in large mesh suspended baskets, in order to allow the inflorescence to freely develop downward or mounted on a cork or arborescent ferns raft. The repottings are to be done at the vegetative restart, signalled by the appearance of the new roots. The species is reported in the appendix II of the CITES (species whose trade is internationally ruled).