The genus name Corydalis derives from the Greek “κορυδαλός” (korudalós), which, in turn, comes from “κόρυδος” (kórudos), the crested lark (Galerida cristata), probably because the spur of its flowers resembles the crest of this bird. The species name panda comes from the Latin “pandus” = curved, arched, due to the shape of the spur.

The genus Corydalis belongs to the family Papaveraceae, within the order Ranunculales, and includes about 450 species that are mainly distributed in the temperate regions of the northern hemisphere, with a center of diversity in China, which has 357 species, of which 262 are endemic

They are annual, biennial or perennial plants, usually glabrous, with tubers or rhizomes sometimes covered by foliar scales. 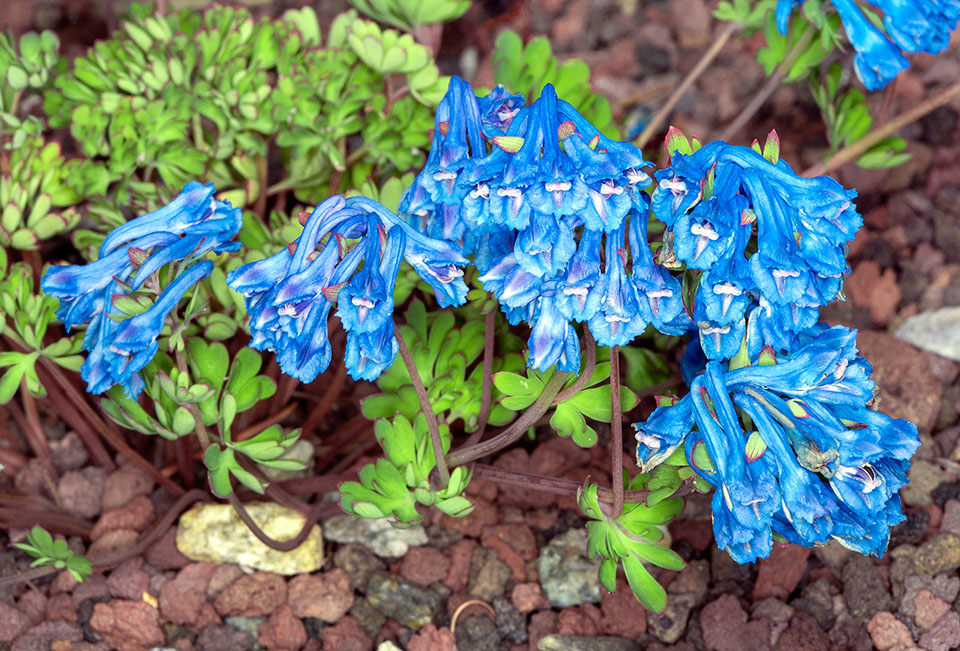 The leaves are alternate, generally 2 or more times ternate. The flowers are arranged in racemes and, depending on the species, can be violet, blue, orange, yellow or White coloured. They have two small petaloids sepals, caducous or persistent, with a dentate margin.

The corolla is zygomorphic (bilaterally symmetric about 1 plane) and has four petals. The two external ones are larger, dissimilar, the upper one generally with a basal spur, the lower one sometimes gibbous but without a spur. Both usually have a winged distal margin and sometimes show a dorsal crest or keel. The two internal ones are smaller and are connate at the tip, which generally has several folds, and enclose the two stamens and the pistil inside. The stamens have three anthers, the middle one with two thecae and the lateral ones with only one, and at least one of them has an elongated nectary at its base fused to the spur of the upper petal.

Some botanists consider that this peculiar floral design and its stamen number and fusion – shared with other genera such as Fumaria and Sarcocapnos – are characters sufficiently different to justify their separation as a distinct family, Fumariaceae. 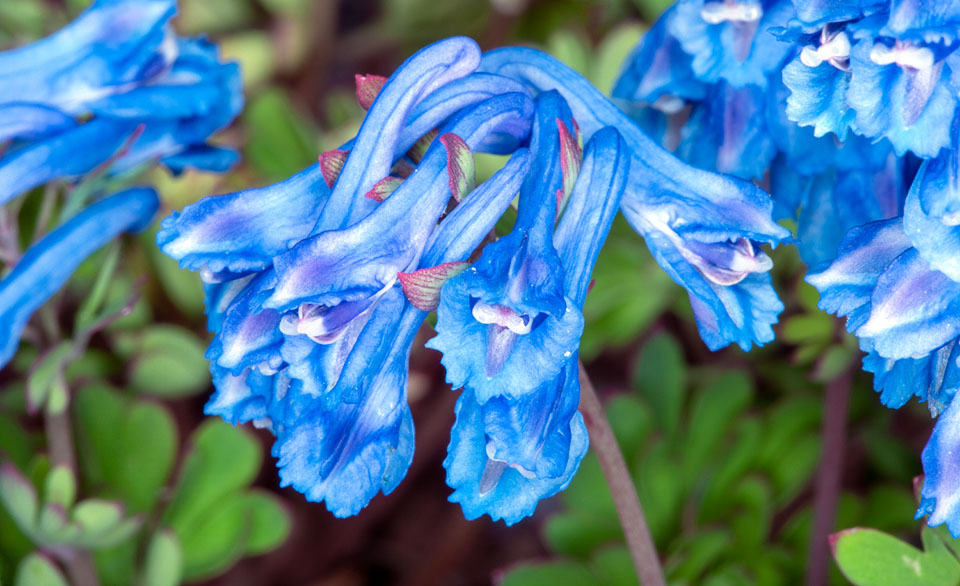 It grows at 3900-4200 m. The flowers have 2 outer petals, one with a curved spur, and 2 lesser inner petals that enclose the stamens and the pistil. Ants disperse seeds © Giuseppe Mazza

The fruit is a 2-valved oblong capsule with a persistent style, which often opens explosively and bears numerous dark seeds carrying elaiosomes. These contain lipids and sugars that attract ants, which in this way help to disperse the seeds (myrmecochory).

Corydalis panda belongs to a group of perennial blue-flowered species, most of them endemic to Sichuan Province and with a very small range.

This species presents dense racemes of 8-15 bright blue or purplish blue flowers, with a white spot at the tip of the inner petals. The upper petal is 18-20 mm long, with a crest 1-2 mm wide in its middle part and a 11-13 mm spur, with the end curved downwards. The lower petal has a rounded limb up to 7 mm wide, with the margin irregularly sinuate-dentate. The leaves are biternate, with segments sometimes tipped with a dark mucro.

It grows in wet alpine scree and in roadside gravel, from 3900 and 4200 m altitude. It blooms and bears fruit from July to September.