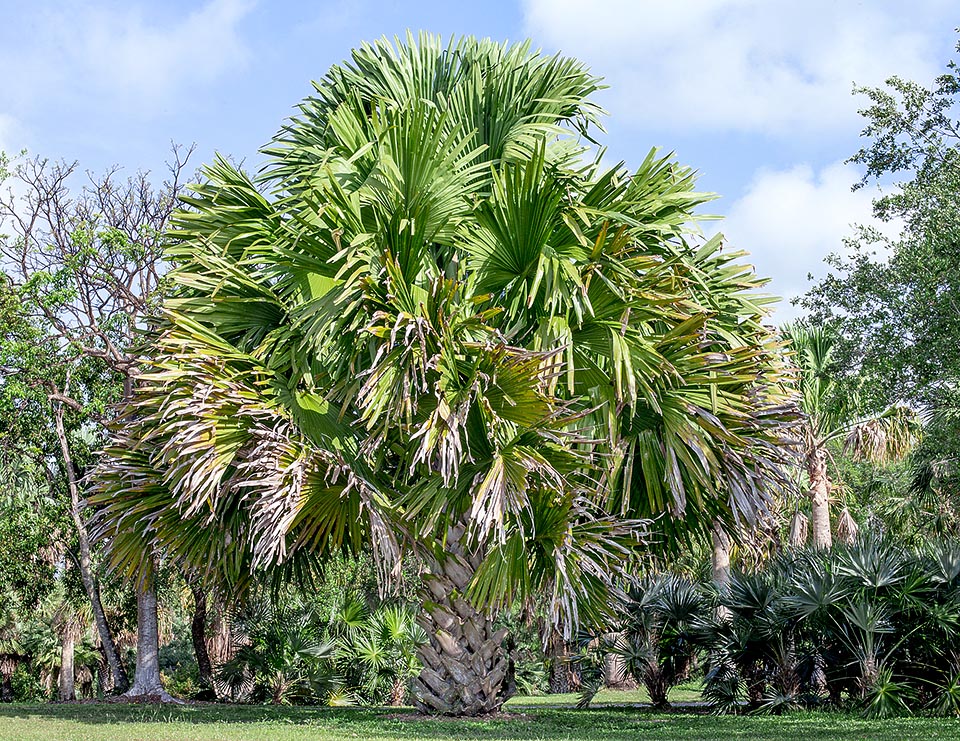 The Corypha taliera can be 10 m tall with a 70 cm stem. Extinct in nature, it counts now only specimens born from seed in various botanical gardens © Giuseppe Mazza

The species is native to the forests of Bangladesh, India (Western Bengal) and Myanmar.

The Corypha taliera Roxb. (1820) is a slow growing solitary species, monoecious, monocarpic (it blooms only once then dies), with imposing cylindrical stem, up to about 10 m tall and of 70 cm of diameter, of brown colour, wrinkly, with the traces of the junction of the fallen leaves. The leaves, on up to 3 m long robust petioles provided at the margins of short brown and glossy spines, are numerous, costapalmate, almost circular, divided in 80-100 linear-lanceolate segments, rigid, the lateral ones with acuminate apex, the median bilobed, of intense glossy green colour, about 2,5 m long at the centre and 10 cm broad, united at the base per about half of their length. 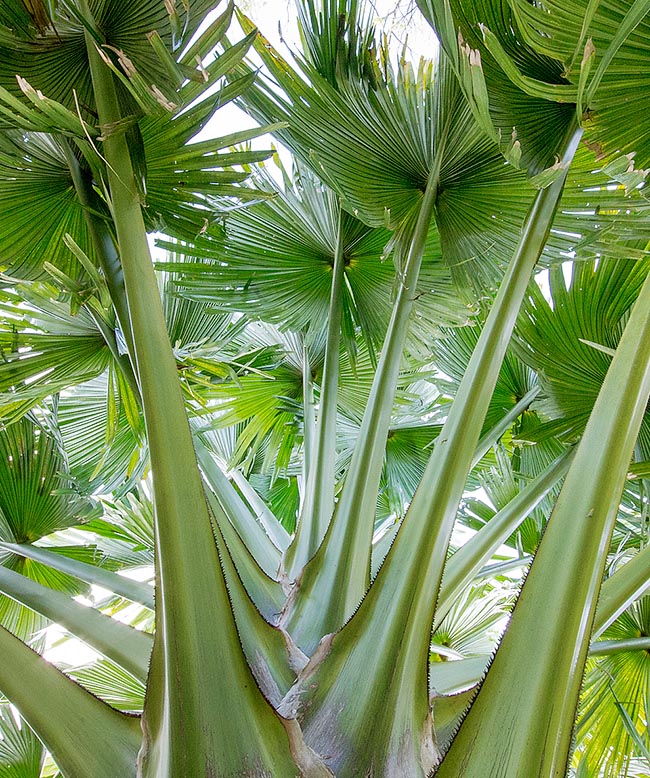 The leaves, on up to 3 m long petioles provided at the margins of short brown and glossy spines, are enormous, almost circular. The seeds contain several bioactive compounds with medicinal virtues © Giuseppe Mazza

The inflorescence is terminal, erect, pyramidal, ramified, 3-5 m long, with a showy mass of tiny subsessile hermaphroditic yellowish white flowers, fragrant, with corolla having 3 slightly concave and fleshy petals, trilobed ovary and 6 stamina. The blooming takes place when the plant is aged between 60 and 80 years, during which the palm has stored in the stem a huge quantity of sugars that are used for producing the big inflorescence. The fruits, that take about one year to ripen, are formed by 1-3 united drupes, but more frequently solitary with at the base the traces of the other two, each one of 3-4 cm of diameter, of yellowish green to dark olive green colour, containing only one globose seed, of 2,5 cm of diameter, particularly hard and of white colour; once the ripening of the fruit is completed, the plant, as said above, passes away.

It reproduces by seed in sandy loam rich of organic substance at the temperature of 26-28 °C, utilizing fairly deep containers, with germination times around the 6-8 months.

The species is inserted in the red list of the IUCN (International Union for Conservation of Nature) as “Extinct in the Wild” (EW), being its last specimen present in the campus of the university of Dacca, whose “natural” origin is not absolutely certain, dead after the blooming in 2012. Presently (2017) the only adult specimens in cultivation, obtained from the seeds of a plant cultivated in the Howrah Botanic Garden (West Bengal), are present in the same garden and from 1996 in the Montgomery Botanical Center of Miami (Florida), in addition to these are to be considered the about 300 young plants obtained from the seeds of Dacca plant and distributed in various Indian botanical institutions.

Similar to the Corypha umbraculifera, it shares with this record of being the biggest palmate leaf, as well as the general conditions of cultivation. Studies on the fruits of the plant bloomed in Dacca have revealed the presence of numerous bioactive compounds with interesting antimicrobial, antioxidant and  cytotoxic properties.