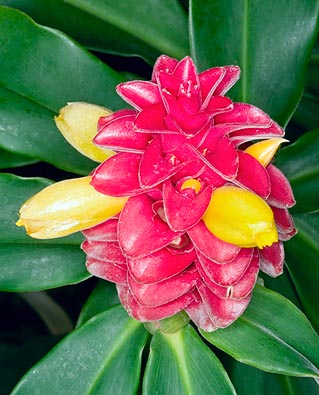 The Costus comosus var. bakeri (K.Schum.) Maas (1972) is native to the humid forests of Central America, from southern Mexico to Ecuador.

The name of the genus Costus was given by Linnaeus in honour to Dioscorides, who had described a plant, deemed similar, with the name of Kostos; the name of the species is the Latin word “comosus” = long haired, with possible reference to the terminal inflorescence.

Perennial herbaceous plant, rhizomatous, it shows thin stems, tall up to two metres, like canes; the leaves, long up to about 40 cm and wide 10 cm, spirally arranged on the stem, are of a glossy intense green colour on the upper side, pubescent underneath. The terminal inflorescences (seldom basal), conical, long lasting (some months), are 20-30 cm long spikes, with imbricated bracts of bright red colour, of a waxy appearance, in which interior come out showy yellow, tubular, 4 cm long, flowers. The fruits are globose berries, 4 cm long and about 2,5 cm wide, containing black seeds. It reproduces by division and by seed.

The plant is frequently cultivated in tropical and subtropical areas both for the long lasting inflorescence, employed in floral decorations, and as garden plant, besides the inflorescences, also for the luxuriant vegetation. It requires a humid warm climate, in full sun or partial shade, and rich, draining soils, kept humid during the vegetative period; outside the tropical and humid subtropical climate zones, is to be cultivated in warm greenhouse, in fact, even if resisting for short periods to close to zero temperatures, it hardly blooms. The plant is often indicated with the wrong name of Costus barbatus.