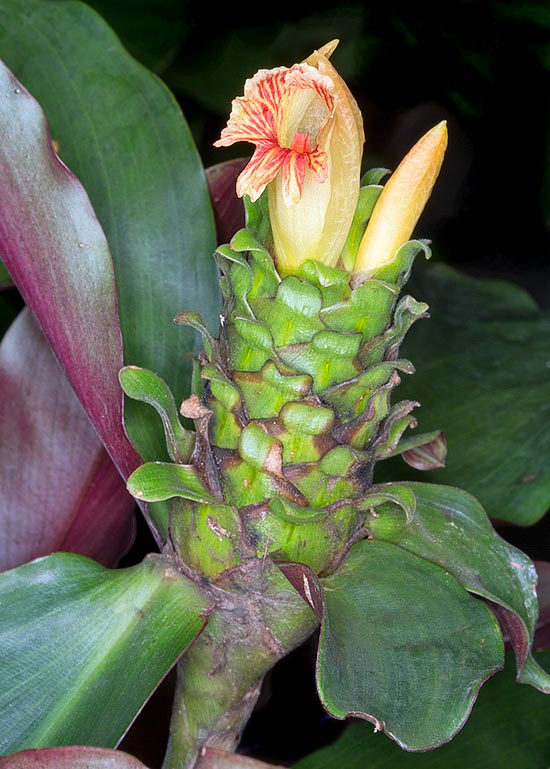 At home in Brazil, with horticultural future, Costus varzearum has been described only in 1976 © Giuseppe Mazza

The species is native to Brazil (Acre and Amazonas) where grows in the alluvial forests flooded by the “white” waters of the Amazon River, called “várzea” , at low altitudes.

The generic name was given by Linnaeus in deference to Dioscorides who had described a plant, deemed similar, with the name of Kostos; the specific Latin name refers to the local name of the ecosystem where it lives.

It reproduces by seed, in loam rich of humus with addition of sand or perlite per a 30% maintained humid at the temperature of 24-26 °C, by division in spring and through the plantules produced at times on the old inflorescences.

Vigorous species and of easy cultivation with particularly ornamental foliage cultivable in the tropical and humid subtropical climate regions, its cultivation may be tried in the warm-temperate ones, where it behaves as deciduous, being able to resist at the rhizome level to temperatures of some degree under 0 °C if placed in sheltered location and dry to avoid rottenness. Due to the reduced dimensions, it may be utilized for edges or as soil cover also in gardens of limited extension. It requires a slightly shaded exposition, but can bear some hours of direct sun in the morning, and well drained soils rich of organic substance, slightly acidic to neutral, maintained constantly humid.

Successfully cultivable also in pot for the decoration of open spaces as well as of luminous interiors, in the coldest climates, with winter lowest night temperatures not under the 14 °C; useful are the nebulizations, in presence of high temperatures and of dry air, to be done with non calcareous water to avoid antiaesthetic spots on the leaves. During the vegetative period the waterings must be regular and abundant, more reduced in winter, allowing the substratum to dry up almost completely before watering again in presence of low temperatures; the fertilizations are to be done in spring-summer with hydrosoluble balanced products with microelements under forms of chelates at half the dosage suggested by the producer.