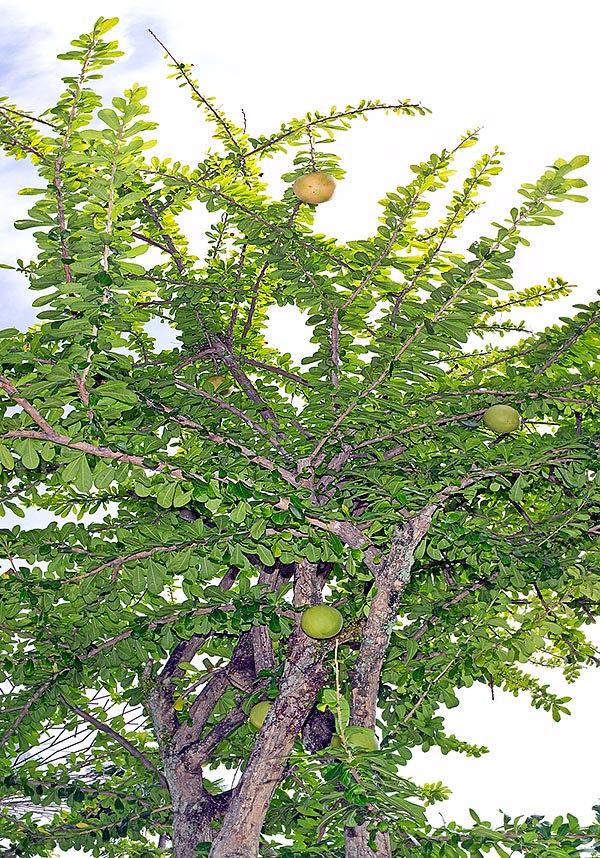 The genus was honoured to the Italian agronomist Pietro de’ Crescenzi (ca. 1233-1320), considered as the founder of modern agronomy, author of the work “Opus ruralium commodorum”, maximum medieval text about agronomic techniques; the specific name comes from a local Brazilian name.

The Crescentia cujete L. (1753) is a small evergreen or semi-deciduous tree, 4-10 m tall, with open and irregular crown with almost horizontal long branches and trunk, up to 50 cm of diameter at the base, with greyish bark initially smooth, wrinkly and vertically fissured in the old specimens. The leaves, almost sessile, are alternate, simple, entire, oblanceolate to spatulate, 4-20 cm long and 3-7 cm broad, united in groups of 2-5 of different length on short shoots along the branches, of glossy dark green colour above, paler and opaque below. The flowers, solitary, generate directly on the trunk and along the branches (cauliflory) on short peduncle, present calyx divided up to the base in two concave ovoid lobes, 1,8-2,5 cm long and 1,2-2,4 cm broad, of green colour, campanulate corolla, 5-7 cm long and of 4-6 cm of diameter, with five unequal triangular lobes having pointed apices and wavy margins, fringed and retroflexed, of yellowish green colour streaked of purple, and 4 little prominent stamina; the flowers, opening during the night, emit an odour deemed unpleasant by many and are pollinated by the bats.

The fruit is a sferoid to ellipsoid berry of 15-30 cm of diameter, initially green then yellow and finally brown when ripe, with smooth, woody and particularly hard epicarp (the skin), of about 0,5 cm of thickness, containing numerous dark brown flat obovate seeds, about 0,7 cm long and 0,5 cm broad, edible, immersed in a poisonous white pulp containing the precursors of the hydrocyanic acid.

It propagates by seed, in draining loam maintained humid at the temperature of 24-26 °C, that germinates in 10-15 days, and easily by semi-woody cutting in summer. Tree of particular importance in the life, the customs and the rituals of the local populations, already in pre-Columbian era, due to the dry fruits emptied of the pulp, resistant and very long lasting, utilized as containers of liquids, for cups, dishes, spoons, musical instruments, such as the maraca, and other handicrafts, usually richly decorated. 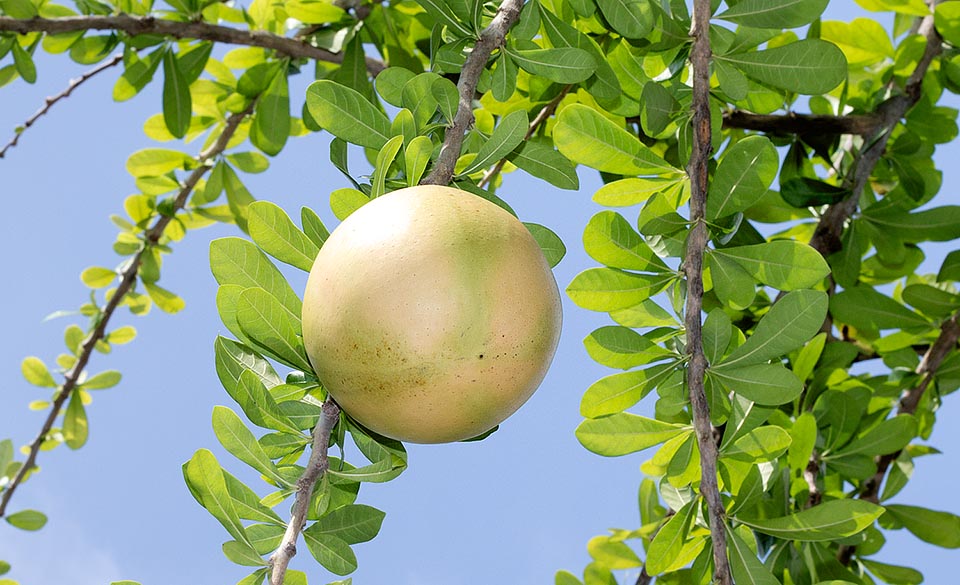 The flowers, with often deemed unpleasant odour, open by night and are pollinated by bats. The fruit, with poisonous pulp, is a spheric-ellipsoid berry of 15-30 cm of diameter. The rich of proteins seeds are edible. Dry and ground they serve to do a refreshing drink. Possible interest in the official pharmacopoeia © Giuseppe Mazza

It is nowadays cultivated in various regions of the world, also as ornamental due to its characteristic fruits, exclusively in tropical and subtropical climates, not bearing temperatures close to 0 °C, unless exceptional and for very short period. It requires an exposition in full sun and is not particular about the soil, even clayey and little draining. The wood, hard, heavy, flexible, easy to work and resistant to the xylophagous insects is utilized in the constructions, for boats and tools of various type, a particular use of the wood and of the bark is as an excellent support for epiphytic orchids.

The seeds, rich of proteins, are edible, dried and ground are used for preparing a refreshing drink. Various parts of the plant are utilized in the traditional medicine by the local populations in the origin countries as well as those where it has been introduced since time, often naturalizing, for various pathologies; it is to be kept in mind the high toxicity of the pulp that has been found to present also a carcinogenic activity; laboratory studies have evidenced the presence of various bioactive compounds of possible interest in the official pharmacopoeia.