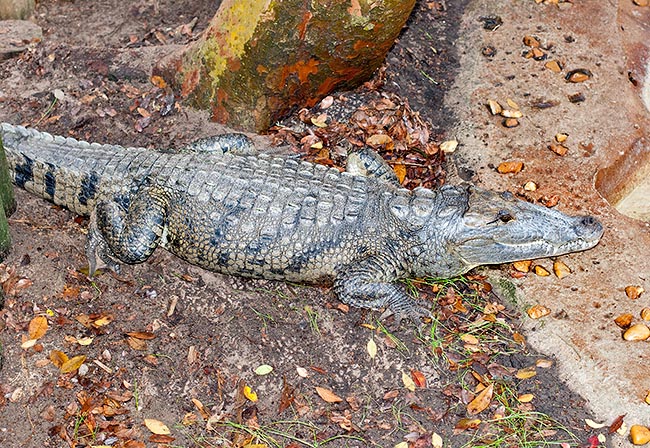 The Crocodylus moreletii counts 10.000-20.000 units only, but is little endangered © Giuseppe Mazza

The term “crocodylus”, as several times said, comes from the ancient Greek and means “worm-shaped pebble”, the term “moreletii” means “of Morelet”, from the name of the French biologist P.M.A. Morelet (1809-1892), who was its discoverer in 1850 in Mexico, during his scientific expeditions in Central and South America.

Substantially, recent censuses identify a low density population, well far away from its historical values; programmes of conservation, both at national as well as international dimensions are presently in progress.

It is endemic to Mexico, Belize and Guatemala.

They mainly live in the lentic freshwaters such as lakes, freshwater swamps, woodland swamps, lagoons and ponds. Recently, they have been sighted also in brackish coastal waters, thus showing a certain tolerance to the increase of salinity. Often, the sub-adults cover of algae.

The Mexican crocodile is a species of loricate subject to the phenomenon of the aestivation, which means that during the dry season it tends to stay in holes full of water, decreasing the metabolism and consequently its nutritional needs.

The ecological series of the Crocodylus moreletii tends to overlap that of the American crocodile (Crocodylus acutus), the interactions between these two species are little known.

While growing, the size of the preys increases, the adults eat freshwater snails, big fishes such as cichlids, reptilians among which also turtles of the genus Kinosternon, called mud turtles (freshwater turtles, please refer to the text Chelonia), of which they break the carapace, birds and small mammals; it is quite a greedy species.

To date, the demographic decline of this crocodile is apparent, as negative result of the intense hunting to which it has been submitted till the fifties of the past century, nowadays still present as poaching, as, not having “ventral osteoderms”, it has a skin that can be very well tanned; to this direct human pressure, we have to add a second pressure always produced by the men indirectly, by modifying the environment through the deforestation, urbanization and pollution of the waters.

In Belize, the urbanization phenomena caused by an increase of the population density are the main cause of the decline of this reptilian; also in Mexico, which is the geographic region where probably the species had got origin, and where, therefore, it is more distributed, we start to notre strond decreases.

In spite of this, there are exceptions to this phenomenon, like in the case of the Biosphere Reserve of Sian Kaán- Yucatan, in Mexico, declared by the UNESCO World Heritage Site.

In this biological paradise, the number of specimens of Mexican crocodile is increasing.

We have to add that the available data, for knowing the “status” in the wild of this splendid crocodile, are scarce, especially in the case of Guatemala.

Ex-situ breeding programmes are active since some years through the “crocodile farms”, with ambiguous outcomes; these biological breeding stations are often considered as dangerous, because escapes of specimens of this greedy crocodile may happen, and, being located in a geographical area different from that where they have been seized, problems may arise to the local fauna or they may enter into competition with other species of crocodile.

For instance, in Mexico, the escaped individuals have entered into competition with those of American crocodile legitimately present in those locations since years.

Data on the biology and the ecology of the specie are gradually increasing; the biologists activate also programmes of eco-sustainable management for this species, and also in Belize and Guatemala crocodile farms are starting, with all relevant risks. 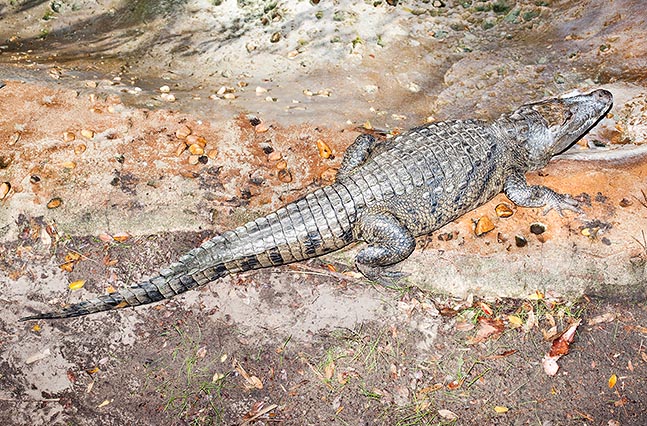 It is a relatively small species: the males do not exceeds the 3,0 m of length and the females are slightly smaller.

The muzzle is rather broad for a crocodile; the colouration is similar to that of the American crocodile, but with a darker shade.

A greyish-brown with a darker band and dots on the body and the tail.

The iris of the eye is silvery brown. The scales on the body are bright yellow with a black band. The crocodiles are, as it’s well known, “diapsid”, that is, they have two holes/openings in the lateral-posterior side of the skull.

This is a character of primitivity of the species, but evolutive and on theme have been found on these animals: for instance, there is no “parietal foramen”, associated with a “photosensitive” organ, typical of many primitive reptilians, and the bones of the skeleton contain spaces filled up with air, which allow him to swim well, without compromising its solidity and soundness.

They have a total of 66-68, thus subdivided: 5 premaxillary; 13-14 maxillary; 15 mandibular. By observing specimen of Mexican crocodile in captivity, we can note that the teeth protrude outwards obliquely and in a disorderly way; in the species in the wild, the teeth project vertically towards the opposite jaw, that is, from the bottom upwards for those of the lower jaw, and, vertically, from top downwards for the upper ones.

The morphology of the teeth tells much to the biologist about what an animal nourishes of; in the case of the Crocodylus moreletii, the back teeth, or mandibular, have a more flattened crown, this means that they are utilized for breaking shells, such as those of those of the aquatic snails or the carapaces of the mud turtles.

A particular characteristic of this species is the presence of a swollen corner in the lower maxillary bone which allows the tenth tooth of the upper maxillary to settle in there perfectly. It happens that some specimens of the various species of crocodile (Mexican included), which live in captivity and which are not managed by biologists, but only by unqualified personnel, do live in too narrow areas, where they can, banging the muzzle, break their teeth, which will grow up again provided the socket is not damaged. All loricates change the teeth continuously, for the whole life, usually a new ones comes out every two months; another possible reason why a tooth may fall is due to the absence of calcium in the diet of the animal.

They build nests either on clumps of vegetal essences or on sandy banks, independently from the water which during the rain may moisten. The dimensions of the nest are 3 m of breadth and 1 m of depth. After having spawned 20-46 eggs, the female seals it and keeps watch along the whole incubation period which lasts about 80 days. Also mixed nests have been found, with eggs of more females.

When the eggs hatching approaches, the mother replies to the call of the young by opening again the nest with its powerful legs in order to help them in coming out. Then, it takes them in the mouth for carrying them to the water, and here both parents will defend them from the predators, conspecifics included.