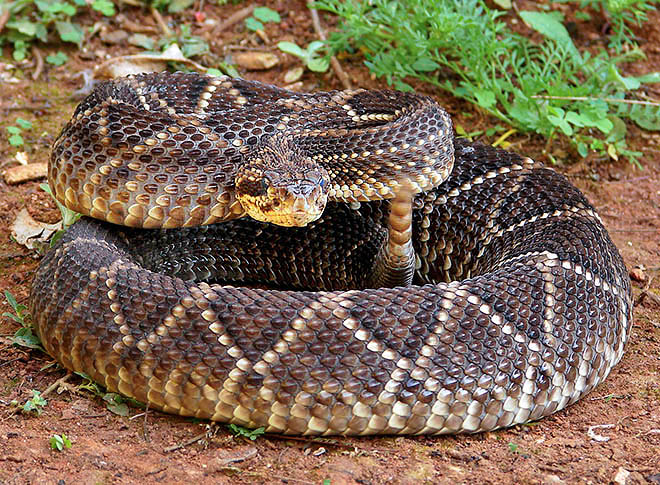 The Cascavel (Crotalus durissus – Linnaeus, 1758), known in Spanish as Casabel, Cascavel, Vibora de cascabel, Cascabela, Serpiente de cascabel; in Portuguese as Cascavel de quatro ventas; in English as Tropical or South American rattlesnake; in Aymaran as Saqapani katari; in German as Schauer Klapperschlange and in French as Crotale cascabelle, is one of the most feared reptilians of the New World, protagonist of local legends, terrifying tales and of real sagas. And not entirely wrong: as almost always is the case, at the base of the legends, whatever extortionate they are, there is a kernel of truth, even if distorted, enlarged and made resounding by the popular fantasy.

The Crotalus durissus is one of the most dangerous poisoners of Central and Southern America, for its great diffusion range as well as for the nervous and aggressive temperament and, even more, due to its venom which, as we shall see, stands among the most active and dangerous in the world of the American and world viperids.

It is not astonishing, therefore, it has risen, in the collective imagination, to the throne of king of the cool-blooded killers, sharing such aura of menace and power with the Bushmaster, or Woods terror, or also Surucucu (Lachesis muta), the greatest American viperid and by sure the longest in the whole world (up to 350 cm).

In reality, however, the bad reputation of the Crotalus durissus is well more deserved than that of Lachesis muta, by sure an impressive serpent for what the size is concerned, but less easy to meet, less aggressive and endowed of a venom which, even if produced in big quantity, is less active than that of the Cascavel and, as a result, responsible of a quite minor number of serious accidents.

Several subspecies of this viperid (Viperidae) belonging to the subfamily of the crotalines (Crotalinae) are described:

This reptilian is also the only one, in South America, really deserving the name of rattlesnake, because the other viperids of that part of the New World do not have that characteristic note as “rattle”, as is quite well described by the scientific name of its direct competitor to the title of king serpent, the Lachesis muta, reptilian who, like the moccasins and the North-American copperheads, vibrates the tail, when upset, but does not produce the typical rattling, unless it does not clashes against the surrounding vegetation.

The Cascavel is a robust reptilian, which reaches remarkable dimensions (up to 180 cm, but, as an average, around the 120-150 cm and up to 4 kg of weight), with a remarkable diameter, its body has an almost triangular section, which reminds me a little the harmless file-snakes, or African file snakes (genus Mehelya), is covered by strongly keeled scales, especially on the back, where they get the look of true and proper tubercules, in particular on the sides of the “vertebral” line, whilst, while going down towards the lateral parts or “sides”, the roughness diminishes progressively.

The background colours vary remarkably depending on the zones, ranging from the pale (ash grey, beige, pale brown) to the dark (chestnut, anthracite and even black) and on them stand out (more or less evident depending on the intensity of the background) darker patterns shaped like lozenges, at times surrounded by pale or white borders and often containing inside some spots of different hue. 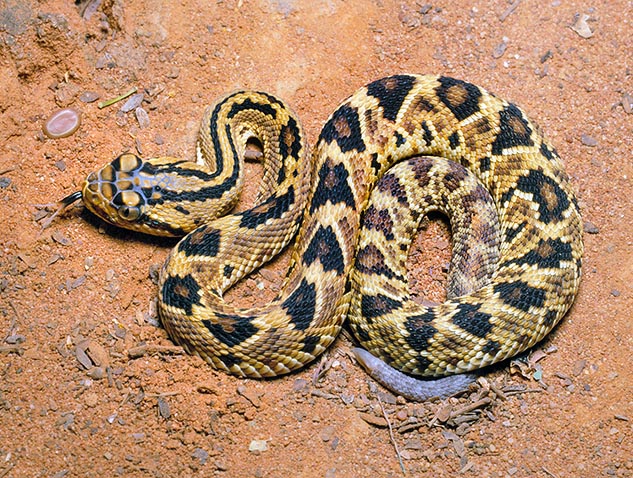 Specimens showing unusual tints, like shades of green (especially in forest), of yellow and even of orange, are not rare. The head is flattened and triangular, the apex of the snout appears relatively “snub”, with the eyes placed much ahead, close to the opening of the thermoreceptor dimples, and, in the whole, the head reminds me, in a larger scale, that of some African and Asian echis (see texts), viperids which, however, do not have the typical dimples of the viperids of the New World.

The eyes do have elliptic and vertical pupil, which reveal its habits, often crepuscular and nocturne, even if, especially in the zones at high altitude (we can meet it also at more than 2500 metres above the sea level) or in the less warm periods, it can be very active in broad daylight. When it is upset or when feeling menaced, it gets the typical defensive and dehortatory posture of the North American rattlers, wrapping in a heap of cols and rapidly vibrating the tail, in way that the corneous rings of the rattle produce the very recognizable buzz, while the head moves back, like a spring ready to shoot the intruder.

Unfortunately, this performance is not always able to warn the one who is walking in the tall grass or in the bush: the serpent may have not realized in time of the approach of an intruder, or the noise produced by somebody moving in the thicket cover the crackling produced by the reptilian or more, simply, the cascavel on that day does not want to emit sounds because in bad mood, and in such case the outcome means a too close encounter which may result in a nice bite.

The fangs, given the size of the reptilian, are up to 2 cm long, and easily get through light clothing, not to mention that often people goes around bare footed, or wearing low shoes and sneakers. Then, many bites are inflicted, to the hands or the upper limbs; especially to those working in the fields or gathering firewood and, even there are several instances of “dry bite” when no or little venom is injected, being this a nervous and aggressive animal, it far more often happens the poisoning occurs.

The venom of the cascavel, or, better, of the cascavels, has a complex composition, varying a lot from area to area, but, even if the lethality may differ, it is always high, and particularly high if compared to other species having even the same size. The variability of the dangerousness is linked mainly to the greater or minor contents of crotoxin and crotamine, with effects going beyond the typical ones, cytotoxic and hemotoxic, typical of many viperids.

In addition to oedema, with tumefaction and extravasation of plasma into the tissues, decolouration of the tissues themselves and possibility of necrosis and painful gangrenes, there is, therefore, in many cases a strong neurotoxic effect, with pareses beginning from the cranial nerves (diplopia or double vision, blindness at times, impossibility to swallow, speech disability), then follows a typical paresis of the neck and paravertebral muscles, with dangling of the head, so much to give the impression of “fracture of the neck”, thing which has created rumours and legends, up to description of the animal as “the serpents which fractures the neck”. The pareses may culminate with paralysis of the breathing muscles, as it happens in the bite of many elapids, resulting in death by asphyxia if nothing is done promptly. However, the complexity of these poisons is such that the whole may even be more complicated by other lethal effects: apart the incoagulable blood, that causes imposing haemorrhages and that, in reported cases, can be practically immediately due to brain haemorrhage, effects are described on the kidney, with renal failure, hypotension and shock, also cardiogenic, besides hypovolemic due to loss of blood and plasma.

To simplify and give an idea of the problem, we may use the arid science of the statistics, and then, either due to the wide diffusion, or to its determination in biting, or to the strength and complexity of the venom, the various subspecies of cascavel are ranked second, for what the number of bites is concerned, after the various and very common lanceheads (see texts), but maybe are in first position for what the number of deaths is involved.

Until the fifties, the 12% of the treated cases (and I underline, treated) averred fatal, whilst those not treated were lethal in the 70% of the cases, and even more (demonstrating that the dry bites in such species are fairly rare). Presently, talking of Brazil only, we register about 20.000 cases of serpent bite per year and at least the 10% of these ones may be attributed to Crotalus durissus, with a death toll of the 3,4% total (and that is, on the various species, inclusive of the least dangerous) but by sure much higher for the durissus.

The cascavel counts a vast assortment of preys, warm-blooded as well as reptilians and amphibians. Usually, it hunts in ambush, relying on the camouflaging and on the lightning speed of the bite, characteristic which renders it dangerous as it does not tend to get away when a person or a tamed animal approaches.

Viviparous reptilian, the female brings into the world from 5 to 12 young (depending also on the subspecies of the geographic area), 15 to 35 cm long, after 4-6 months of “gestation”, in different periods of the year depending on the zone and the climate.