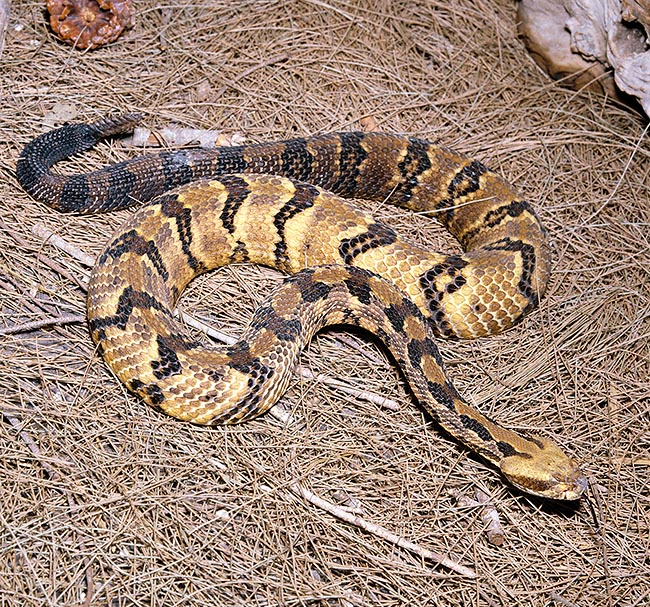 Crotalus horridus atricaudatus. Not aggressive even if exceeds 150 cm. Keeps motionless or goes away © Mazza

The Timber rattlesnake (Crotalus horridus Linnaeus, 1758) called in USA also Canebrak rattlesnake, after some should have some subspecies, such as Crotalus horridus atricaudatus, but not all are in agreement with this. In the seventies, Pisani, in fact, did notice that the variants were not important enough for justifying the creation of the subspecies.

In any case, we cannot deny some variations in the livery, often connected with the geographic zones, and precisely: a yellow variation, with yellowish background colour, on which stand out transversal dark bars, whilst the tail often tends to be darker than the rest of the body, typical of the northernmost zones (i.e. Canada); a southern variant, with reddish or salmon coloured background, on which are evident the dark dots, often V-shaped, longitudinally cut by a dorsal reddish or brown stripe; a western variant, which occupies the central belt of the continent, with a background colour tending to the grey; and, finally, a melanic variant.

The one in which we all agree is the common name, or better, the common names, referring to some of the habitats preferred by this reptilian, woods, forests, wooded areas and sugar cane plantations. This is a snake of North America having a vast home range, but limited to the eastern half of the continent, from Canada (Ontario), on the north, up to eastern Texas and Florida to the south, passing through New York, New Hampshire, New Jersey, Minnesota, Kentucky, Indiana, North Carolina, Virginia, and so on.

It is the only one rattlesnake that goes so far north-east, adapting to the plains as well as to the mountains, with a clear preference for the wooded areas. In the northern zones, often, huge concentrations (even more than 100 specimens), of these snakes hibernate together, in common “dens”, which are often shared with the Copperheads (Agkistrodon contortrix), which are crotalids without “rattle”. 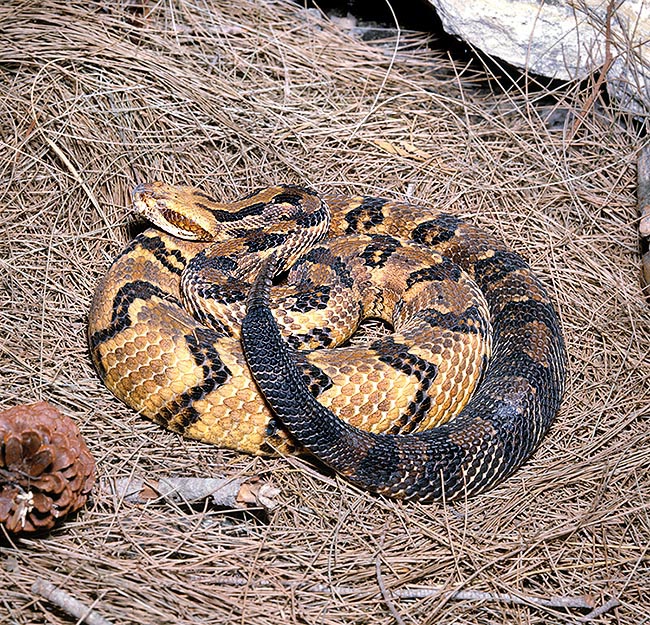 It winters in common dens with even 100 specimens, often mixed with Agkistrodon contortrix © Giuseppe Mazza

These shelters are usually localized on hillsides facing south, where the winter sun gives some heat, and in spring-summer, the reptilians get out and move around, to then gather when the first colds come.

The physical characteristics are fairly similar to those of other rattlesnakes, with depressed and wide head, distinct from the body, eye placed rather forward and with vertical pupil, heat sensitive dimples utilized for localizing the prey, rattling organ well evident, etc.

Their dimensions are important, with averages going from 90 to 150 cm, and with a record of 190 cm, and consequently also the venom fangs reach a remarkable length (2 cm), but the temper of the timber rattlesnake is quite less aggressive than that of other species, by some even described as “placid”, and for this it is responsible for a very low number of incidents.

The increasing scarcity, reported by many, which has met by this reptilian might be, in reality, a fact connected also to biological reasons.

As a matter of fact, it is a very long-living species (up to even 20 years), but with a low reproductive rate.

The female does not procreate before being 10 or 12 years old and delivers only a dozen of live offspring (ovoviviparous), after this, it is not any more gravid for at least two years (at times, even 4 or 6 years). Consequently, during all its life, the “litters” will be, at maximum, five or six, and, at times, one or two only.

If approached, the timber rattlesnake prefers to move away discretely or to stand motionless trusting on its mimetic livery, but rarely will bite or will show a real aggressiveness. The venom, in any case, is powerful and mostly cytotoxic and can kill an adult man in the unfortunate case of a full bite.