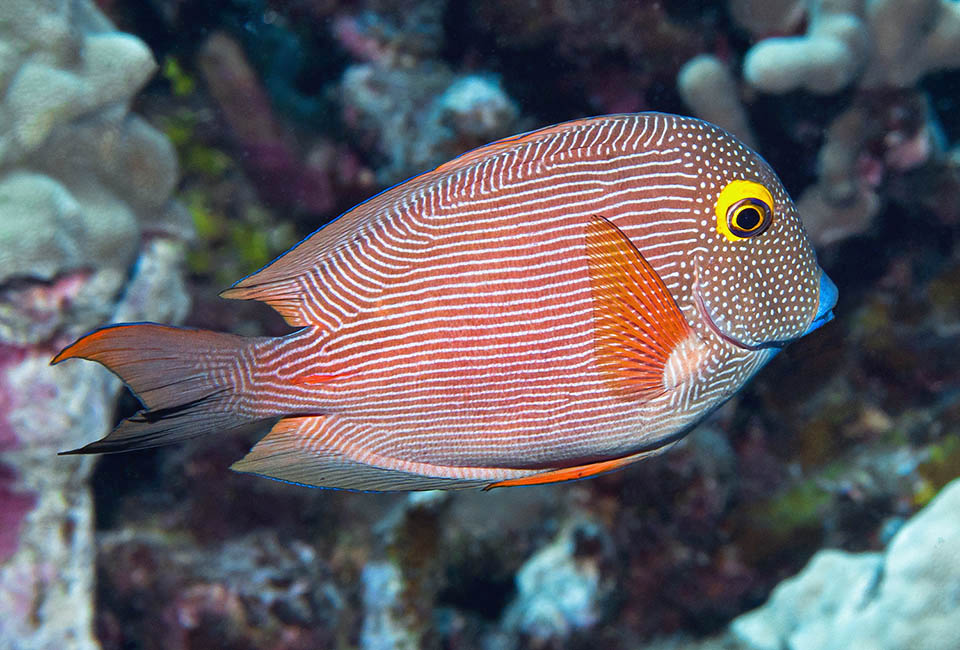 Ctenochaetus strigosus has a very small distribution. Endemic to Hawaii and to Johnston Atoll, it is found then unbelievably in Africa, in the Socotra Archipelago © Brian Cole

Ctenochaetus strigosus (Bennett 1828) belongs to the class Actinopterygii, the ray-finned fishes, to the order Perciformes and to the family Acanthuridae, the so-called surgeonfishes, due to the presence of an extractable horizontal blade sharp, like a razor, placed on the caudal peduncle to discourage aggressors with the threat of sharp lashes.

Presently, they count 6 genera and 84 species (2021), all useful for the survival of the reef, because they clean up the bottoms from the debris and free the madreporic formations from the filamentous infesting algae. 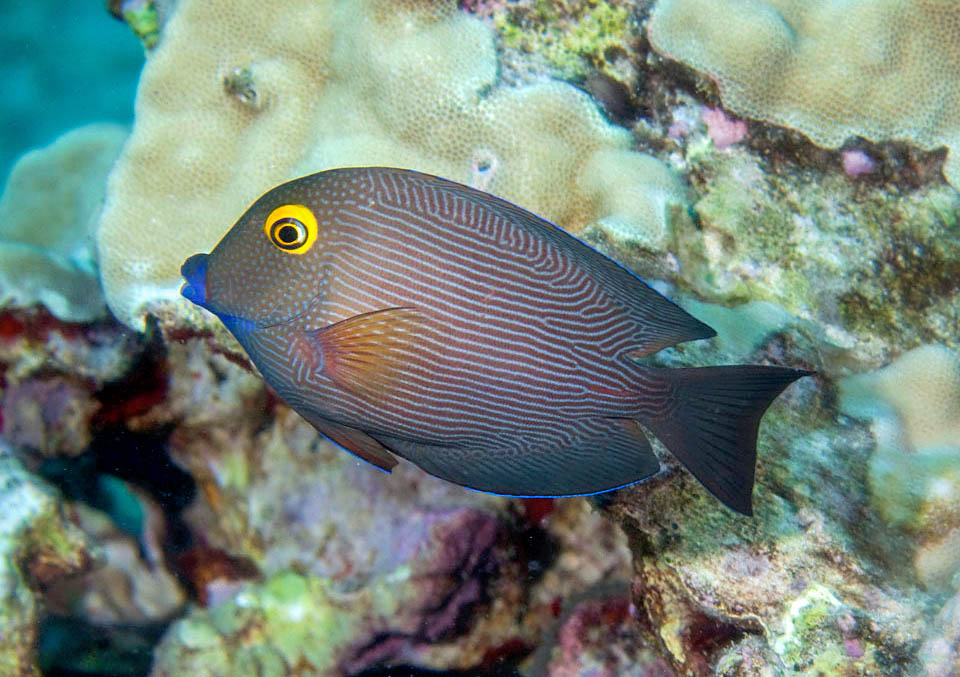 Typical is the eye surrounded by an odd canary yellow ring widening asymmetric towards the back, absent in some analogous species of Indo-Pacific © Paddy Ryan

Moderately large fishes, like Acanthurus xanthopterus that reaches 70 cm in length, and of modest size, like the Ctenochaetus tominiensis of about 16 cm, or Ctenochaetus strigosus, hardly reaching 15 cm.

The Latin name of the genus Ctenochaetus comes from the Greek “κτείς” (kteis) = comb and “χαίτη” (chaite) = hairs, bristles, with reference to its particular dentition. As a matter of fact, whilst the close relatives of the genus Acanthurus have solid rigid teeth, these ones have them united in brushes, reducing them to bristles as thin as hairs. The specific name strigosus, in Latin, slim, lean, probably alludes to the small size and thinness of the fish. 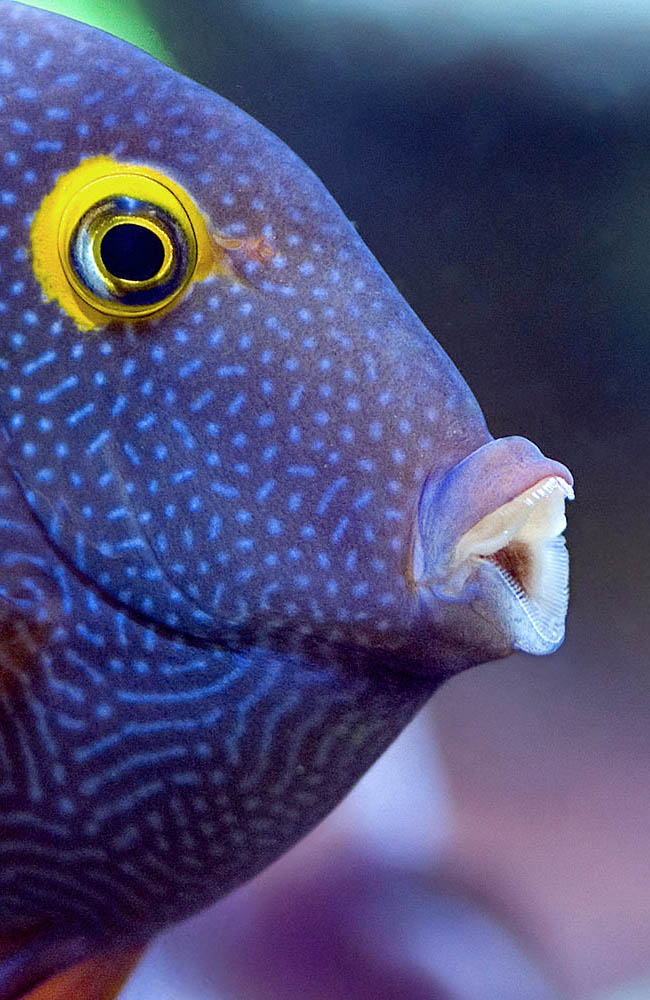 The teeth, well present in the genus Acanthurus, here are reduced to bristles as thin as hairs, grouped in brushes © Sabine Penisson

Ctenochaetus strigosus has a very reduced distribution. Endemic to the Hawaii Islands, is present also, not far westwards, in the Johnston Atoll, administered by the USA, located at about one third of distance from the Marshall Islands. After Fishbase, it is then found, native, in the Socotra Archipelago, in front of the Horn of Africa. Other sightings in the Indo-Pacific are not reliable as possibly caused by confusions with Ctenochaetus binotatus, of analogous look, but with the eye edged in dark blue and not, as Ctenochaetus strigosus, in bright yellow.

Ctenochaetus strigosus is a diurnal benthopelagic species that goes swimming close to madreporic formations, rocks and rubbles between 1 m and 113 m of depth.

Like any surgeonfish, also Ctenochaetus strigosus has a characteristic extractable blade located in a special socket at the centre of the caudal peduncle. The survival of the species relies also on an effective camouflage livery.

The background colour, tendentially reddish brown but rather variable, it is in fact not by chance grooved by bluish parallel lines, that ramify on the back, on the belly and on the fins whilst the head has dots of a more marked blue colour that intensifies on the showy lips and on the chin. Finally, the pectoral and the pelvic fins tend to orange.

But the most salient characteristic of the livery is the eye, surrounded by an odd canary yellow ring that widens asymmetrically towards the back.

Why highlight the eye, seen that the same is placed in the most important part of the body? 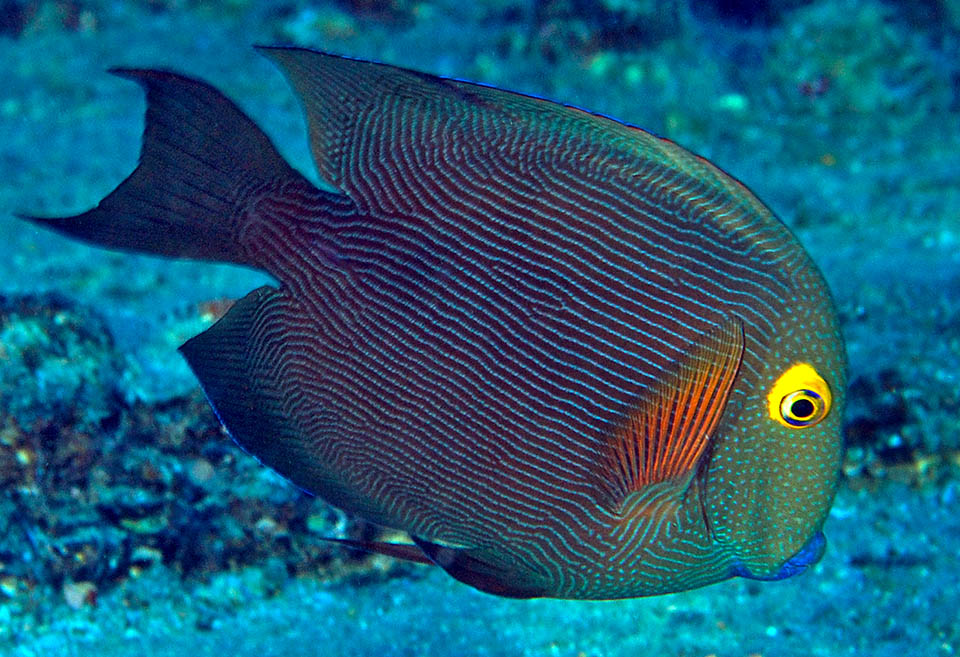 Here looking on the bottom for the film of diatoms and blue-green algae it eats. It moves it with the bristles, sucking it with the microfauna present and small debris © Sabine Penisson

In fact, usually, the fishes of the reef hide it with a dark vertical band or invent fake eyes towards the tail, less vital, to confuse predators’ ideas. Maybe, it is for looking, in the darkness, a bigger fish or to distract the opponent for a moment while extracting the blade for the flick of the tail. Perhaps, as it goes swimming solitary, it serves for getting noticed by the conspecifics, at the moment of the reproduction.

Like in other acanthurids, the juvenile livery is quite different from the adult’s one. Initially the small fishes have a pure yellow colour, then appear some light orange parallel longitudinal lines. 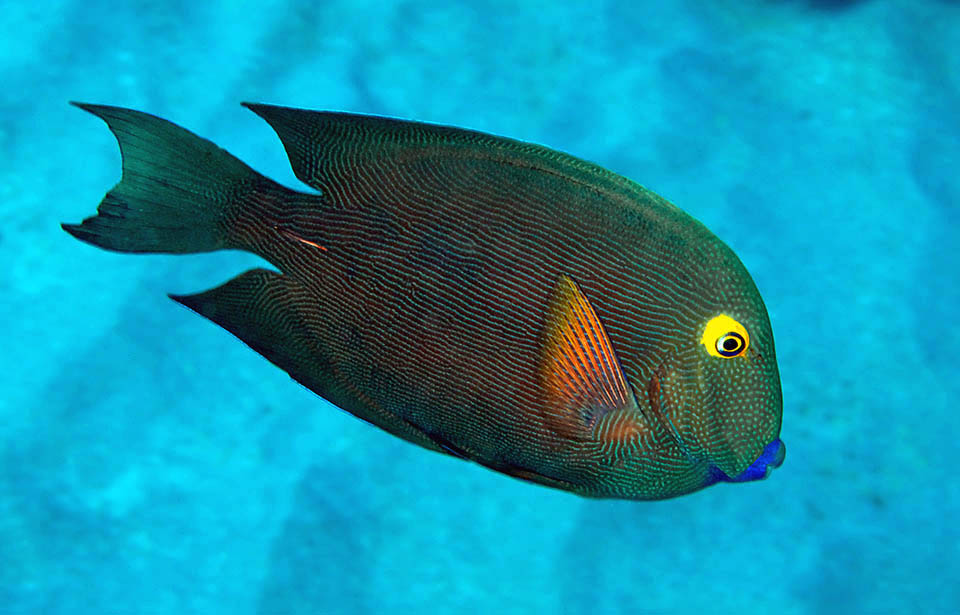 Here is well noted on the caudal peduncle the typical sharp blade with which the acanthurids lash aggressors, relatively big for an only 15 cm fish © Keoki Stender

The yellow colour is often found in cleaner fishes having the same size, and in fact, the young Ctenochaetus strigosus are welcomed in the “turtle’s service stations” where they clean them up with care from the filamentous algae that, encrusting the carapace, may in the long run stop their swimming.

Then, growing, the yellow of the livery remains for a short time only on the fins, especially the caudal, whilst the body gets reddish and the adults’ parallel stripes and the blue spots do appear a little at a time. 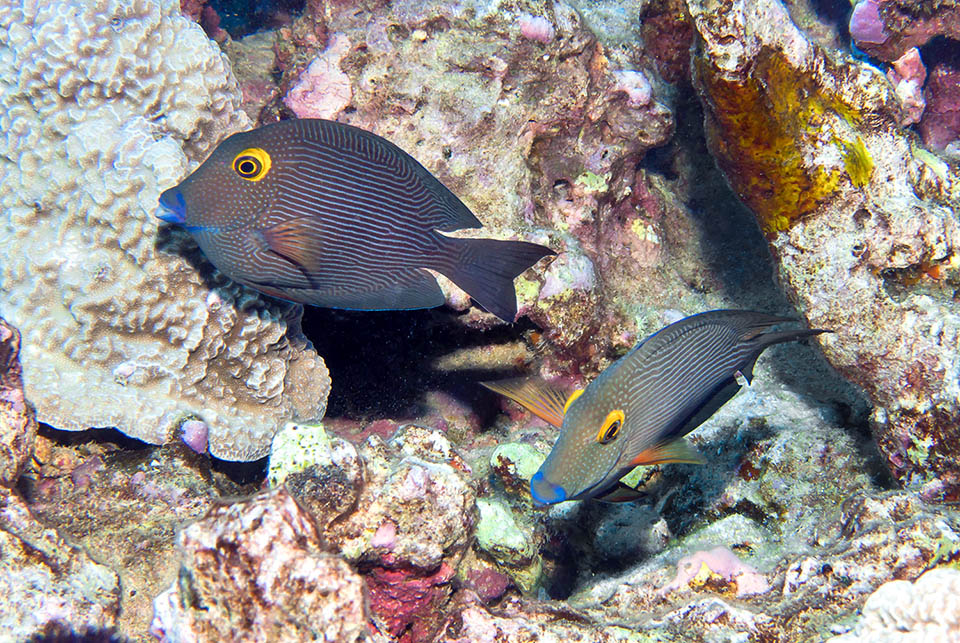 Ctenochaetus strigosus is a usually solitary fish that swims in pair during the reproduction time. The fecundated eggs are entrusted to the currents © Brian Cole

The diet of the Ctenochaetus strigosus is mainly based on the film of diatoms and of blue-green algae that cover the seabeds. They move it off with their bristles, aspirating at the same time the present microfauna and the small debris.

As a consequence, when they brush poisonous organisms, their meat gets toxic and if consumed, despite their small size, they can cause serious food poisonings known under the name of ciguatera. 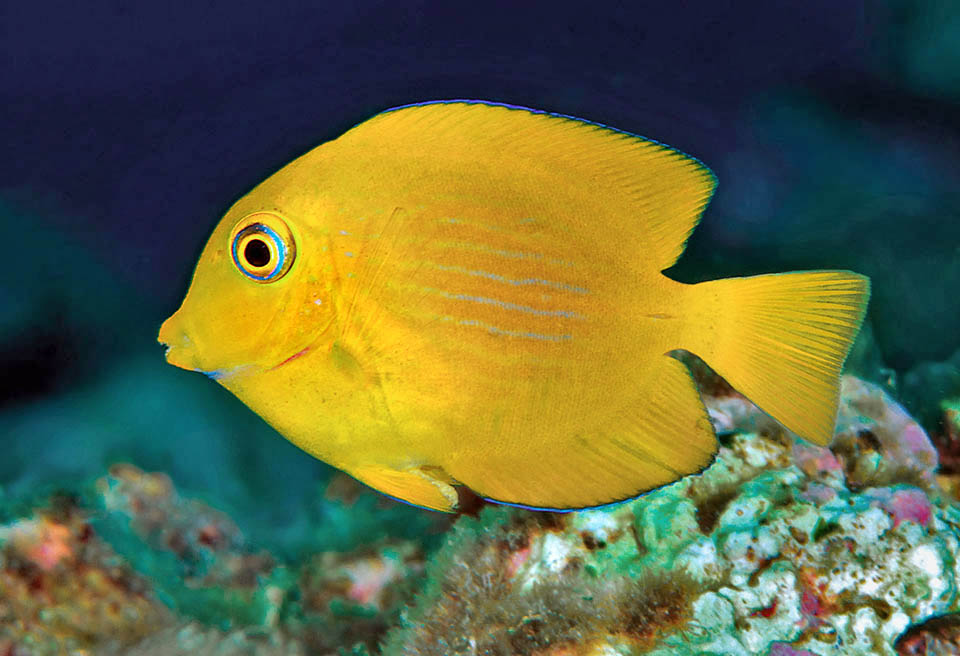 The young livery is quite different from the adult. Initially the small fishes are pure yellow, then appear light longitudinal parallel orange lines © Keoki Stender

The reproduction does not happen in groups, but couples take form that go up towards the surface to reproduce. There are no parental cares and the eggs, fecundate while swimming, are entrusted to the currents.

Together with other acanthurids, these fishes were exported massively from the Hawaii for the domestic aquaria, where they often died starving, seeing the difficulty in nourishing them. Nowadays, luckily for them, this trade is forbidden. 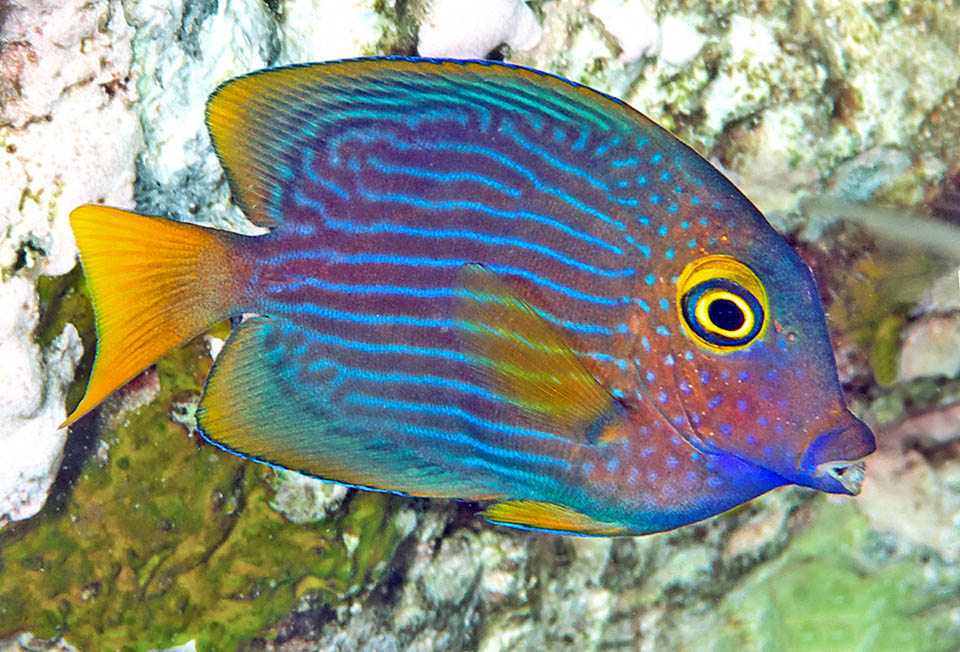 Growing, only the fins remain yellow, especially the caudal, whilst body gets reddish and appear a little at a time the adults’ parallel stripes and blue spots © Keoki Stender

However, it is not a seriously endangered species. The resilience is good with a possible doubling of the populations in less than 15 months and the vulnerability index is presently moderate, marking 29 on a scale of 100.