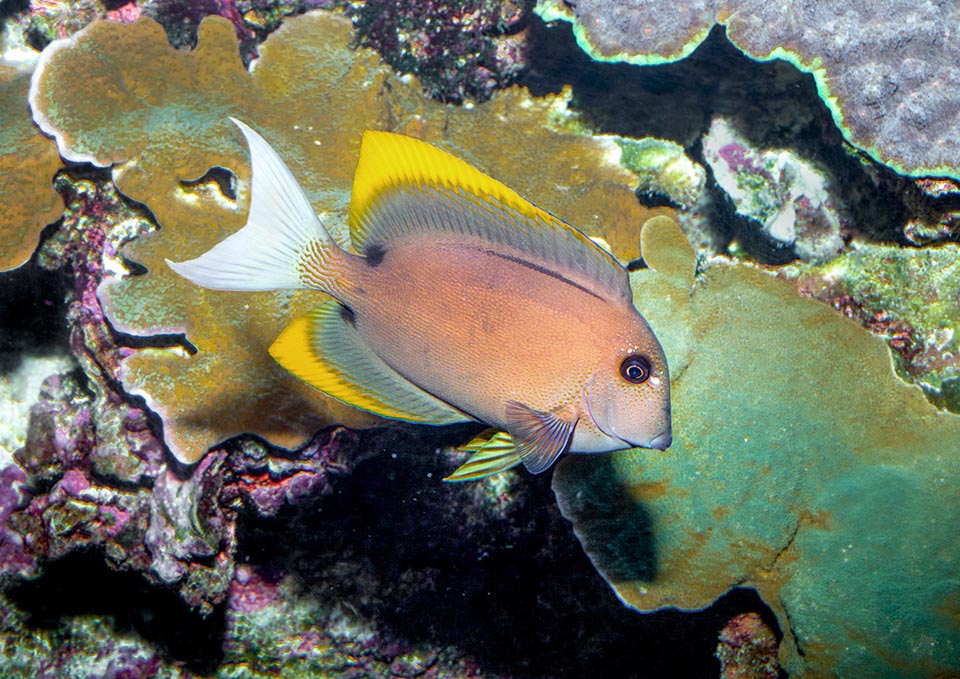 Spread fins Ctenochaetus tominiensis in all its beauty. Present in central-western Pacific, is one of the extant smallest surgeonfishes © Giuseppe Mazza

The Tomini surgeonfish  (Ctenochaetus tominiensis Randall, 1955), belongs to the class of the  Actinopterygii, the ray-finned fishes, to the order of the  Perciformes and to the family of the Acanthuridae, called surgeonfishes, due to the presence of a horizontal blade, sharp as a razor, on the nasal peduncle, meant for the aggressors. They whip them skillfully, obliging them to flee bleeding.

For the rest, if not provoked, they are pacific herbivores, useful for the survival of the reefs, as they clean the seabeds and free the madreporic formations from the infesting algae. Acanthurus xanthopterus, with a record of 70 cm of length, is the biggest membre of the family, whilst Ctenochaetus tominiensis stands among the smallest, as barely reaches the 16 cm. 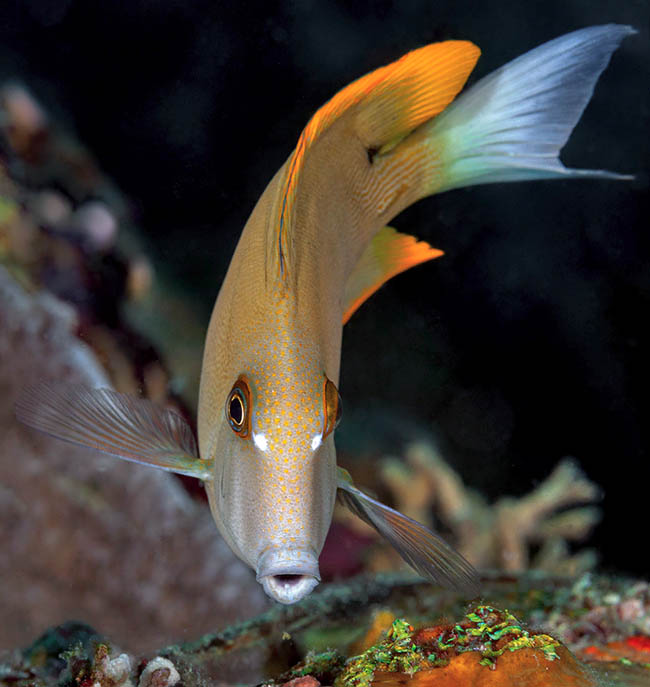 As a matter of fact, whilst their close relatives of the genus Acanthurus have solid rigid teeth, these fishes have transformed them in brushes with bristles as thin as hairs.

The name of the species tominiensis, refers to the Gulf of Tomini, in Indonesia, where it is a frequent species.

The Tomini surgeonfish has a rather vast distribution area in the tropical waters of central-western Pacific.

Starting from the coasts of Vietnam, we find it eastwards in the waters of the Philippines, in Indonesia, Palau, Papua New Guinea, Australia, Solomon Islands, Vanuatu, Fiji and Tonga.

It lives solitary or in small schools, sheltered by the coral’s formations, between 3 and 45 m of depth, even if, then, it rarely goes down under the 25 cm.

The caudal fin, white, is furcated in the young and lunate in the old individuals. With the age, it may tend to bluish or dark grey.

The body is pale brown with a thin orange drawing that breaks in an evident dotting on the head, especially between the eyes, also bordered by orange. 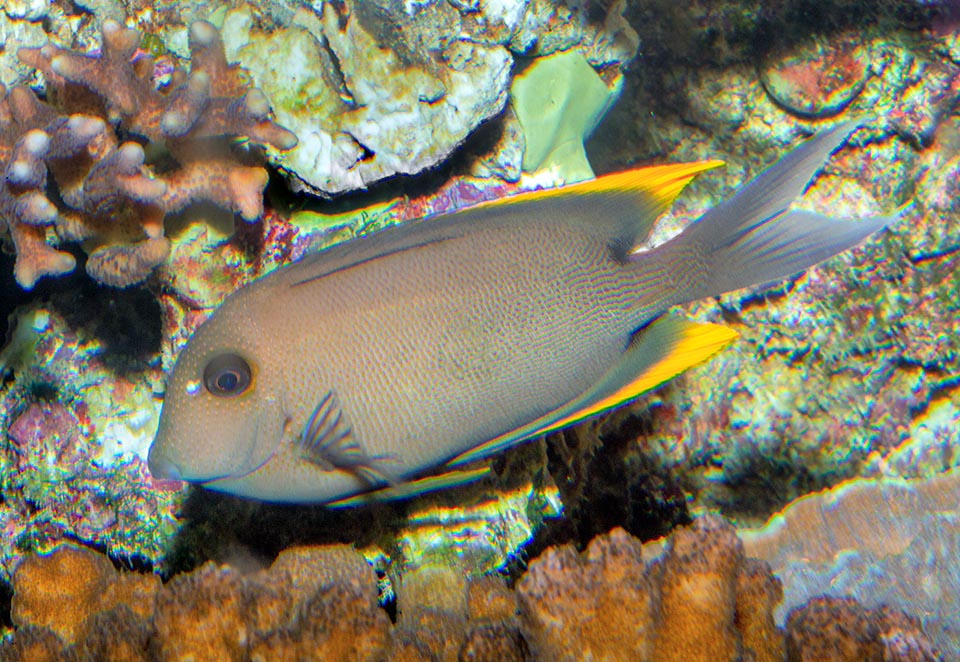 The white caudal fin is furcated in the young and lunate in the old. With age, many tend to bluish or grey © Giuseppe Mazza

The Tomini surgeonfish nourishes of the film of diatoms and the blue-green algae that cover the sunny bottoms. It removes them with the bristles sucking in the meantime the present microfauna and the small detrita. 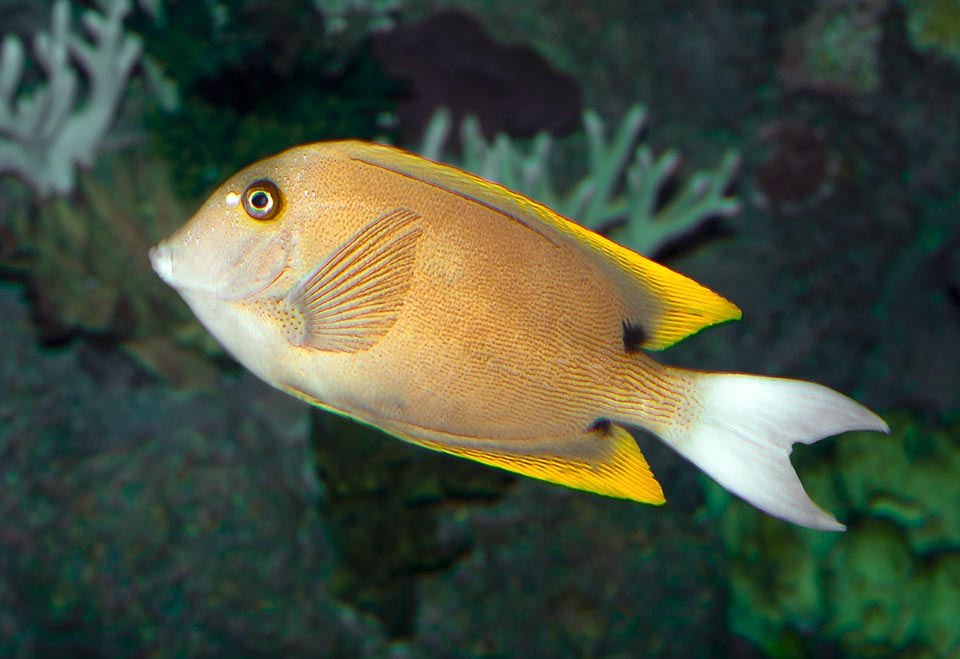 There are no parental cares and the eggs, fecundated while swimming, are entrusted to the currents. It seems that they are particularly long-living fishes that may reach the 20 years of age. Despite the modest size, however, it is not easy to feed them in aquaria and like all surgeonfishes they are species that can be hosted in the large pools of the public aquaria.

The resilience of the species is good, with possible doubling of the populations in less than 15 months. Therefore, it is not an endangered animal: the diffusion is ample and even if with the climate warming the reefs die, it will always find something to eat. Nowadays, in 2020, the vulnerability index is decidedly low, marking just 21 on a scale of 100.