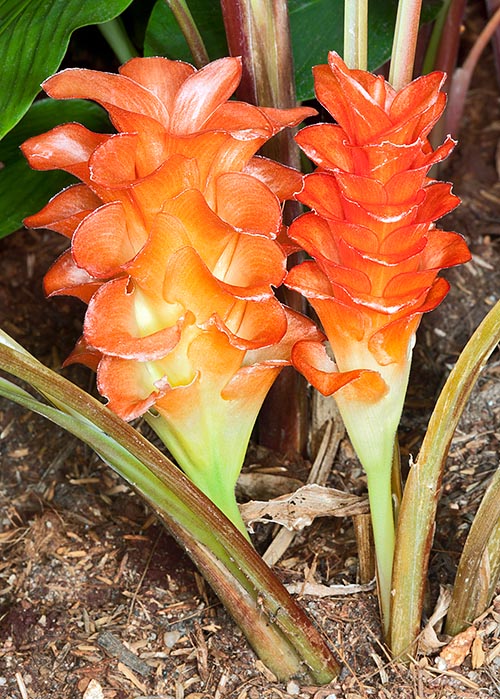 The species is native to the Andaman Islands, Myanmar and Thailand, where it grows in the undergrowth of the semi-deciduous forests up to about 700 m of altitude.

The name of the genus comes from the Arabic “kurkum” = saffron, with reference the saffron rhizome of the Curcuma longa L. (1753); the species is honoured to the politician, historian, poet and botanist William Roscoe (1753-1831) from Liverpool, first president and co-founder in 1803 of the first English public botanic garden.

Inflorescence, on a short peduncle hidden by the foliar sheath, terminal, erect, 10-18 cm long and of 5-7 cm of diameter, formed by 15-45 obovate bracts arranged on 4-5 longitudinal rows, coriaceous, glossy, about 4 cm long, uniformly of red orange colour, enclosing 2-4 flowers opening in succession; sterile apical bracts identical as per colour and size to the fertile ones. Flower long about 5 cm with funnel-shaped trilobed cream white corolla, roundish cream white labellum with yellow spot at the centre and cream white oblong staminodes. The fruit is an oblong capsule containing seeds equipped with white aril.

It reproduces by seed in loam rich of organic substance with addition of sand or perlite for a 30-40%, maintained humid and in semi-shaded position, at the temperature of 22-24 °C, by micropropagation and by division during the resting period.

Species with particularly decorative inflorescence and of long duration on the plant, up to about 2 months, among the most popular of the genus, cultivable in the tropical and subtropical humid climate zones in semi-shaded position on soils rich of organic substance, sandy, slightly acidic to slightly alkaline, maintained humid; at rhizome level, during the resting period, can resist to temperatures around the 0 °C only if completely dry. In the cold climates the rhizomes may be interred in spring, 3-4 cm deep, with blooming in late summer, and extracted in autumn and conserved in dry location at temperature preferably over the 10 °C. Cultivable also in pot utilizing a loam rich of organic substance with addition of coarse siliceous sand per a 30-40%, with regular and abundant waterings, but without stagnations, during the vegetative period and fertilizations with balanced products with microelements; during the resting period the loam is to maintained dry and the pot is to be placed in an ambient with temperature of no less than 12 °C.

The cut inflorescences, of long duration, are particularly appreciated in the floral compositions.