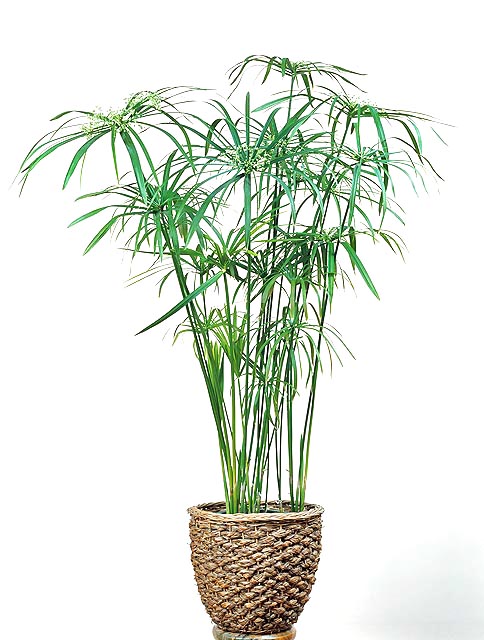 Cyperus alternifolius is much appreciated for indoor decoration © Giuseppe Mazza

This plant is native to Africa (Angola, Burundi, Democratic Republic of the Congo, Eritrea, Ethiopia, Kenya, Madagascar, Malawi, Mauritius, Mozambique, Reunion, Ruanda, Somalia, South Africa, Sudan, Tanzania, Uganda, Zambia and Zimbabwe) and of the Arabian Peninsula (Saudi Arabia and Yemen), where it grows in swampy areas in the plains as well as at medium altitudes.

The name of the genus comes from the Greek “kypeiros”, utilized by Theocritus and by Theophrastus; the name of the species is the combination of the Latin words “alternus, a, um” = alternate and “folium” = leaf, with obvious signification.

The Cyperus alternifolius L. (1767) is a perennial herbaceous monocotyledon, cespitose, with short and thick horizontal rhizomes, and fibrous roots; it has erect stems (culms), 0,5-1,8 m long, with almost triangular section, smooth or slightly wrinkled, of an intense green colour, with alternate basal leaves reduced to sheaths without lamina of reddish brown colour. Compound inflorescences at the apex of the stem, 3-10 cm tall, with groups of spikelets of bisexual flowers of greenish white colour carried by peduncles which are longer than the axis from which they depart.

The inflorescences are underpinned by about 20 green bracts similar to leaves, flat, long up to 30 cm and 1,5 cm broad, with rather sharp edges, almost horizontal, apart the apical ones which may be filiform and more or less drooping.

The fruits are achenes (dry fruits which do not open when ripe, containing one seed only with thin wall, coriaceous, not merged to the seed), ellipsoid, slightly triangular, about x 0,5 mm, of brown colour. It reproduces by seed, to be placed in surface on a substratum kept wet at a temperature of 18-20° C, by division and by apical portion of the stem in water.

It is the most cultivated plant of the genus, suitable for tropical, subtropical and warm temperate climates, in fact, it may resist only to few degrees under the 0° C for short time, possibly losing the aerial part and growing again from the rhizomes in spring; the plant dies by temperatures of -6, -8° C. In open air, where the climate allows, it may be utilized in full sun or partial shade as isolated group, in mass or for edges, paying attention to keep dry the soil, even if well rooted plants may bear short drought periods; but its ideal position is immersed in ponds and puddles up to a depth of 10-15 cm or at their borders.

Fast growing, it forms big tufts which are to be periodically renewed because it tends to expand radially, leaving a zone at the centre with the residuals of the old vegetations. Much appreciated also in pot for indoor decoration, in very luminous location, utilizing a substratum with addition of sand or other inert materials to avoid that it becomes too compact and thus hinders the oxygenation of the roots; the substratum is to be kept constantly humid or the pot is to be placed in a container with some water permanently on the bottom, with temperature not to be less than 10° C. During the vegetative period, the monthly input of nutrients by means of liquid fertilizers rich in nitrogen, is quite useful, but at half of the dosage suggested in the box.

For the reproduction by cutting, we must cut the apex at about 10 cm from the crown of bracts, reduced to few centimetres of length, and the same is placed, upside down, in a container full of water in way that the bracts are just a little submerged, at a temperature around the 20° C; from the nodes will get out one or more plants which, once provided with roots, will be treated as the adult ones.

They have selected varieties of reduced dimensions such as ‘Nana’ and ‘Gracilis’, suitable also for the terraria, and with variegated bracts. It is subject to attacks of pests, in particular mites and scale insects; it must be, therefore, controlled periodically in order to intervene quickly if needed.

→ To appreciate the biodiversity within the CYPERACEAE family please click here.