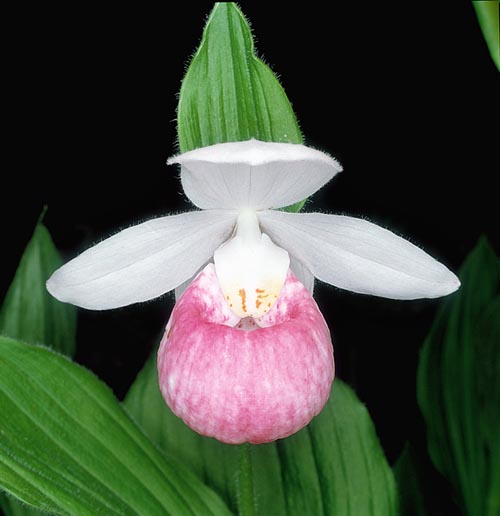 The name of the genus is the combination of the Late Latin terms “Cyprius” = of Cyprus, one of the names of Venus, and “pedium” = slipper, sandal, with reference to the shape of the labellum; the name of the species is the genitive of the Latin term “regina” = queen.

The inflorescence is terminal erect and carries 1-3 (rarely 4), flowers with pristine white sepals and petals, which highlight the labellum, usually bright pink with white striations; a completely white variety does exist.

It is the biggest, and by many considered as the most ornamental, amongst the spontaneous North American orchids, of rather easy cultivation, if its cultivation exigencies are respected.

It requires a climate not differing from that of its origin places, with cool and humid summers, as it does not bear the high temperatures and the dry air, an exposition in full sun or slight shade, with at least 2-3 hours of direct sun per day, and neutral soil, or, better, slightly alkaline, light and perfectly draining, kept constantly humid; it suffers in compact or too clayey soils and decays in presence of water stagnations or of poor oxygenation at the roots level.
It may be cultivated in pot, not forgetting its exigencies, on a substratum which may be formed by alkaline peat, mould of leaves and calcareous sand in equal parts, caring particularly the drainage.

The Cypripedium reginae is the Minnesota state flower.

The contact with the leaves down may cause allergic reactions in particular sensitive subjects.

It is a protected species, at risk of extinction in many of its origin areas due to the excessive anthropization and the indiscriminate harvesting, which is, in any case, of no use, as the plants picked up in the wild rarely do survive.