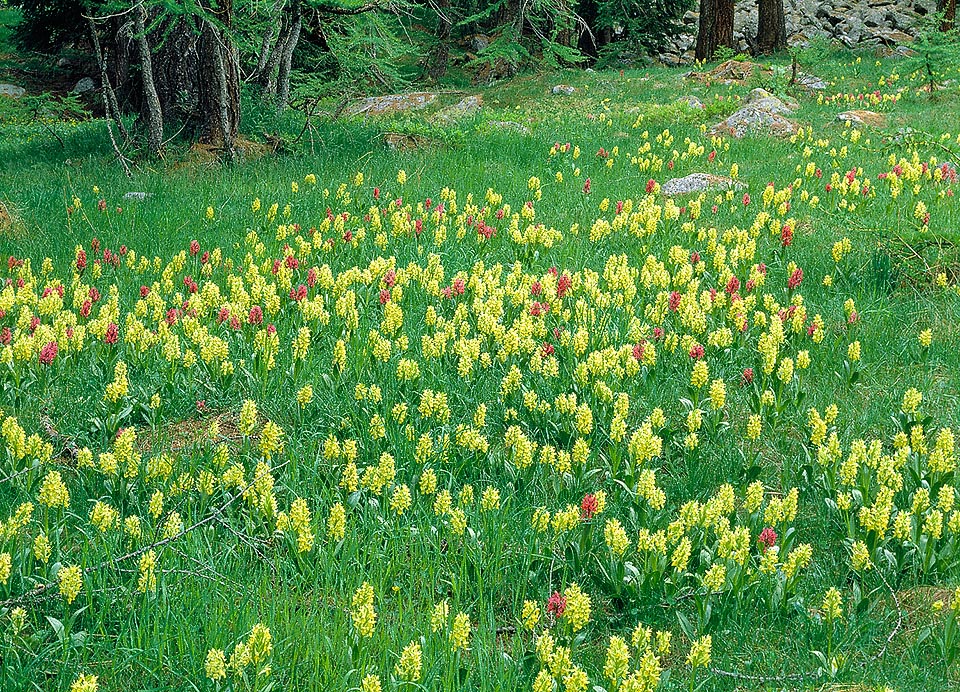 The Dactylorhiza sambucina lives preferably in the little dense meadows, even arid, or in the sub-alpine or alpine pastures, cooler, garrigues and luminous spaces even woody. The preferred soil is not very humid, but it adapts to soils with little nourishment and with any grade of acid pH.

Native to the European-Caucasian region, it can be found with a certain frequency from Spain up to the Scandinavian peninsula and in Italy, where prefers the mountainous and hilly zones, from 300 up to 2100 metres. It is found also in Sicily, but in Sardinia the species is not present, as well as in some zones north to the Alps and in southern Europe between Slovenia and Albania. 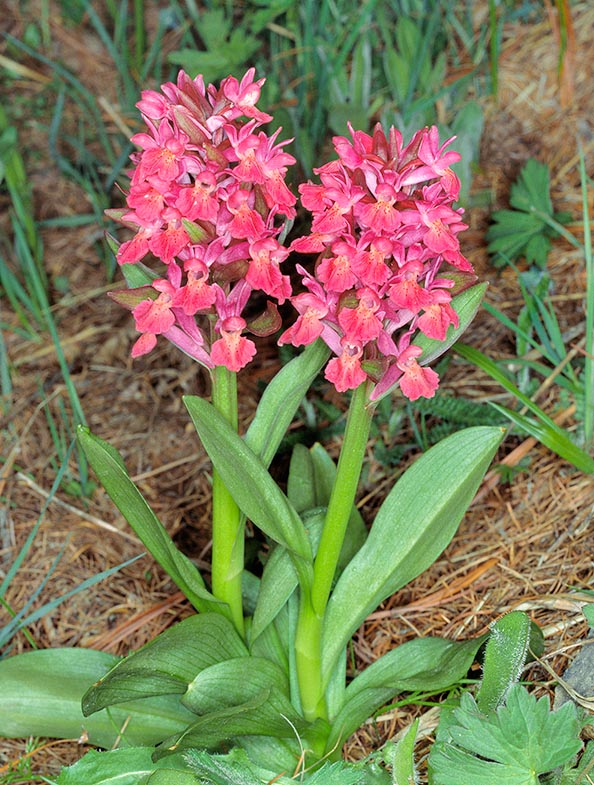 The inflorescence may reach 10 cm. It's rather consistent, oval, slightly “dishevelled” © Giuseppe Mazza

Previous description dated 1700 done by Tournefort and the confirmation of its characteristic scent of elderberry led Linnaeus to call sambucina this species (Stockholm, 1775).

He made her a member of the genus Orchis, finally calling it Orchis sambucina, but having moreover furnished an epithet concerning the shape of the leaves, (Orchis latifolia), he misled the scholars that followed.

Finally, they reached the present genus Dactylorhiza, basing more correctly on the branched shape of the roots, almost fingerlike, differently from the genus Orchis, that presents two or three roundish rhizotubers, hence the meaning of the name itself “ὄρχις” (orchis) = testicle.

It was the Hungarian botanist Kàroly Rezso Soò, in 1962, who proposed Dactylorhiza sambucina, binomen still accepted.

It is the particular rooting apparatus who suggested the generic name of the species.

In the generic term Dactylorhiza are indicated the two Greek words: “δακτυλοϛ” (dáctylos) = finger and “ῥίζα” (rhiza) = root, referring to the roots subdivided like the fingers of a hand.

The species sambucina, comes from the Greek “σαμπούκου” (sampoukou) = elderberry, due to the scent, as mentioned before, similar to the elderberry, well known shrub with the flowers intensely scented.

Dactylorhiza sambucina (L.) Soó, 1962, is a spontaneous, perennial, geophytic herbaceous plant, with hypogeal rhizotubers rich of reserve substances, that keep the buds safe from the adverse weather. From them, every year, the new shoots will sprout. These particular tubers are subdivided in several lobes, with the main two serving, one as feeding organ, the other as reserve storage for the plant which will sprout the following year. Over these apparatuses, are widening the peculiar fasciculate roots. Outside are placed as base some atrophied leaves, from which rises a rather short stem, usually from 10 to 30 cm long, that initially is like a small hollow tuber, then becomes upward more angular and nuanced of violaceous. 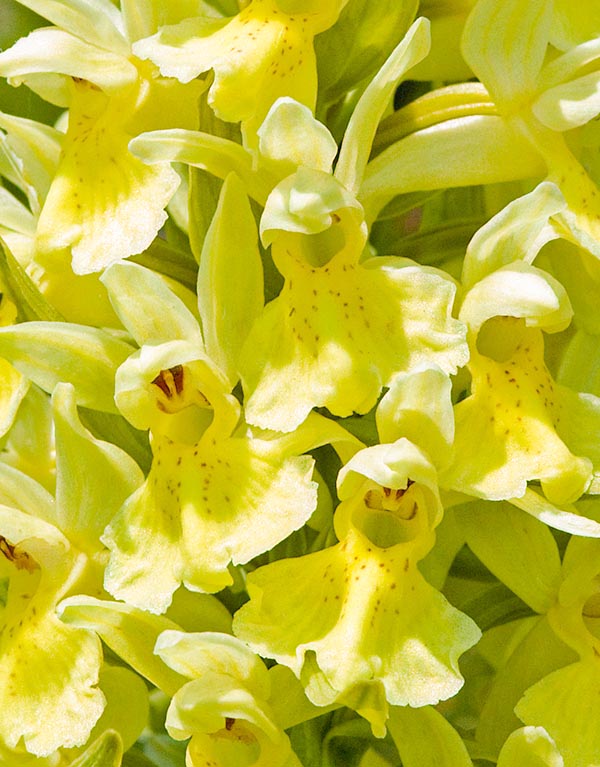 The leaves, usually not more than 7, parallelinerved as in most orchids, have no spots and wrap the stem. Elongated at the base, with roundish apex, conversely, they are on top, erect with the higher ones sharp. The blooming occurs starting from April till early July.

The inflorescence, that may reach the 10 cm, is quite substantial, oval, slightly “dishevelled” and presents, as curiously happens in some species of orchid, flowers that are, actually, overturned, labellum included, hence called “resupinate”.

The 15 mm broad and 10 mm long labellum, dotted at the centre by small visible spots, may be entire or lightly trilobed, with wavy margins, and follows behind with a bent down spur, almost as long as the labellum itself.

The pollen, gelatinous, presents as customary in most orchids, protected by its own “bursicula”, waiting for sticking on the head of an insect, attracted by a plant devoid of nectar, deceived by a false attractive look.

The pollinating insects explain with their behaviour the reason of the colourations the inflorescence may assume. As apparently different species often sprout at short distance from each other specimen of a delicate yellow colour, or, defined by Winter as f. rubra, of a more aggressive vermilion red. Very rarely a third possible form may appear in yellow individuals with a wide red spot on the labellum (f. chusae, C. E. Hermos).

Its “clients” are almost always Apids, in particular the Bombus pascuorum, who usually visits a Lamiaceae, the Betonica officinalis, extraordinarily resembling to the Dactylorhiza sambucina of red colour.

As to the yellow version we understand why the Bombus lapidarius usually visits the Lamiaceae Phlomis fruticosa and the Scrophulariaceae Rhinanthus alectorolophus, both fawn coloured… Two versions of the same species simply double the probabilities of being visited. A quite curious factor is that only the youngest bumblebees allow to be cheated, whilst the oldest ones do recognize the trap. 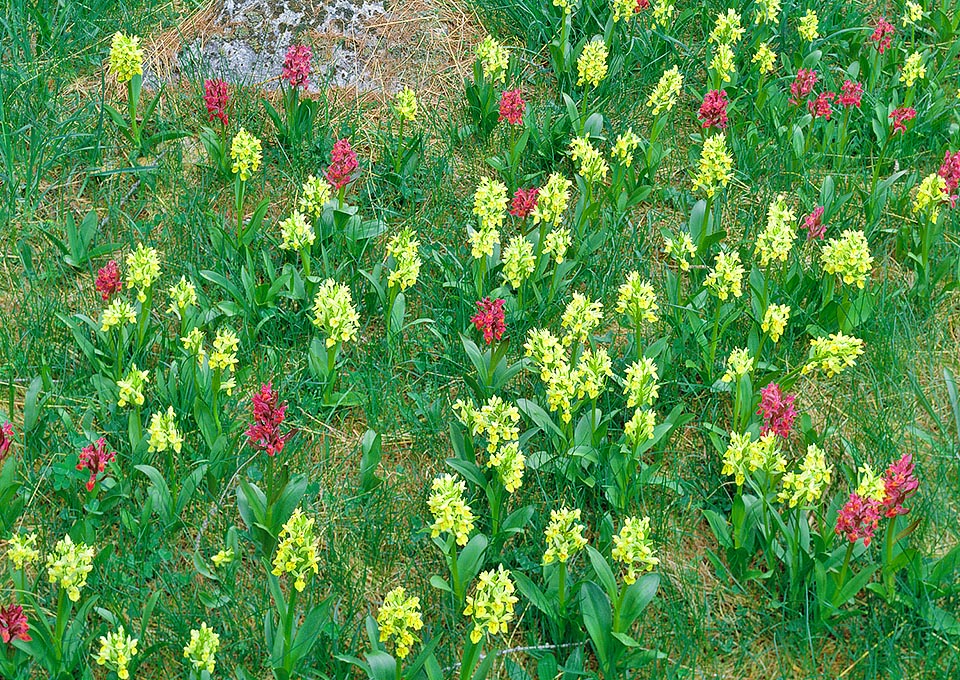