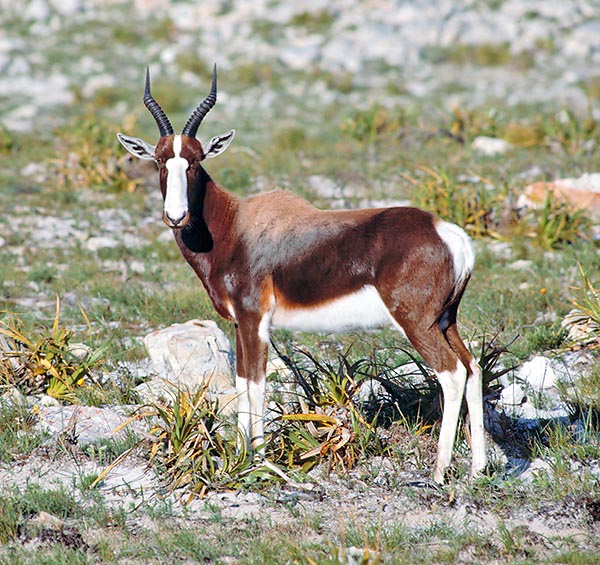 A Bontebock (Damaliscus dorcas dorcas) in its habitat © Giuseppe Mazza

The Damaliscus dorcas, known also as Damaliscus pygargus, belongs to the order of artiodactyls (Artiodactyla) and to the family of the bovids (Bovidae), subfamily Alcelaphinae, including several species of hartebeest (bubals) and the smaller sassabies.

The animals eating vegetables have different ways of nourishing; some are “grazers”, others “browsers”. The English terminology is more concise and expresses in two single words two different manners of eating the grass.

“Grazers” are the animals which eat the grass of the prairies, like the cows, to be clear, tearing it off from the soil, whilst the “browsers” tear off directly from the plants, twigs, leaves, buds, etc.

Just to do another example, the White rhinoceros (Ceratotherium simum) is a “grazer”, and its square-shaped muzzle (square-lipped rhino), represents an evolution adaptation to this system of pasturage, whilst the Black rhinoceros (Diceros bicornis) is a “browser”, and is equipped with a buccal apparatus shaped like the beak of a parrot, useful for tearing off the food, also solid, from the shrubs and from the low plants (hook-lipped rhino). This difference of alimentary preferences is also useful for recognizing the excreta: though similar in shape, those of the white rhino have a more homogenous and fine appearance, whilst those of the black rhino are rougher and rich of small pieces of twigs and coarse fibres. The “grazers” and the “browsers” may be pure (or almost) or alternate the two systems, depending on the availability of food, the season and so forth.

Its closest relative, the Bontebock, is much similar to the Blesbock; it is quite less common and is present only in a small area of the Cape, in its most southern part. Time ago, during a dinner with African friends, I had a small argument with a person who considered himself, quite modestly, an expert student of African zoology. 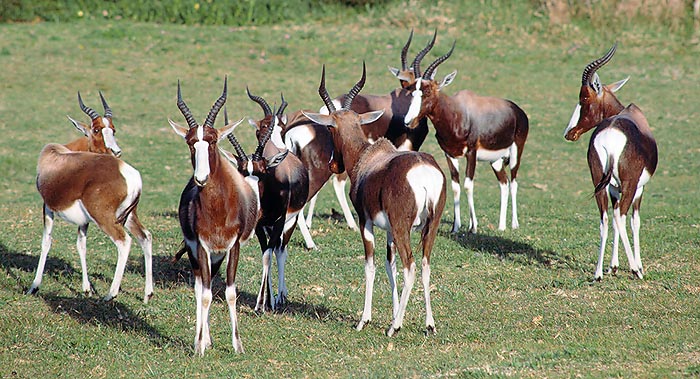 The Damaliscus dorcas dorcas are not many, but are well protected © Giuseppe Mazza

He affirmed, sure, without any discussion, that the Bontebock (Damaliscus dorcas dorcas) was present only in such limited area due to the hunting and that before the arrival of the white man, endless herds of bontebocks were wandering all over South Africa, from the Cape of Good Hope up to the Limpopo.

In his certainty, this expert showed to have several gaps in zoology and also about what concerned the history of his country and the geological history of austral Africa.

At the time the first white settlers saw the bontebocks, these antelopes had been already confined since time in that type of savannah called strandveld by climatic changes occurred thousands of years before, and therefore since long time, they were present in a much more reduced number than the blesbocks. The Strandveld (in Afrikaans, Strand means beach and Veld, field, savannah, moorland) and is a whole of vegetal essences present only in the most southern coastal South Africa.

It is a vegetation of transition from the thick and much green Fynbos (very nice bushes), which is something like the Mediterranean thicket of the extreme south of the African continent and the Karooveld, typical of the Karoo deserts. 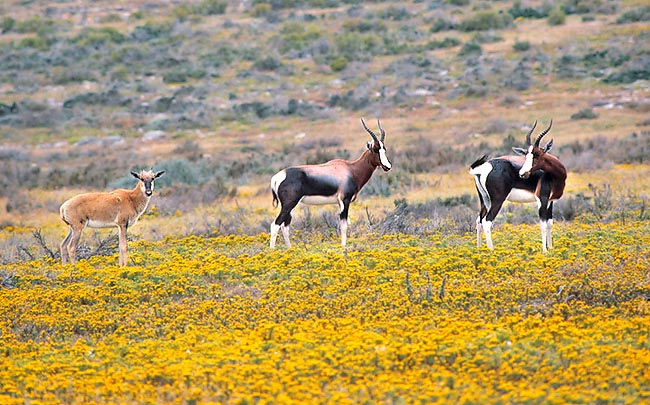 View of the Bontebock National Park in flower with a pair and a young of Damaliscus dorcas dorcas © G. Mazza

The strandvels grows up on dunes and sandy soil and is formed by several essences, such as the waxberry (plant once utilized for fabricating tapers and candles), heath, the blombos, succulent plants and various species of flowers which, during the austral spring, render it coloured as a cultivated garden, but also herbs little palatable to most of the herbivores.

Talking of the bontebock, in any case, it looks sure that this Damaliscus was confined where is now found by the desertification process of a stripe of highlands of about 260 km, the two Karoo deserts, and of such deserti- fication, even if for some this will be disappointing, it is absolutely impossible to give the blame to the man, not even to pull him by the hair.

The blesbock is therefore a real damaliscus of medium size, with weights reaching, in the male, the 90 kg and more at times (in zones of rich pasturage), but the average is of about 70 kg. The females are smaller (average: 60 kg), but there is not a marked sexual dimorphism as it occurs in other antelopes. 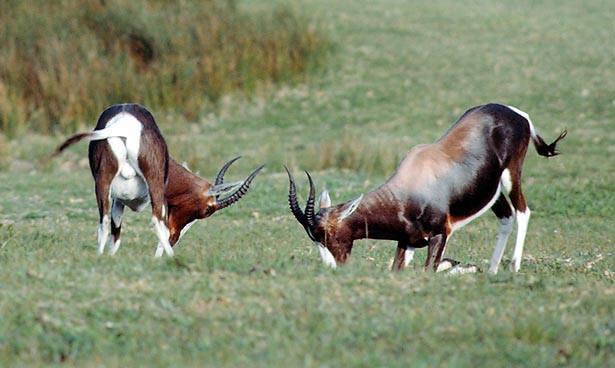 The mantle is maroon or brown, whilst the belly and the lower part of the paws are white. On the muzzle there is an evident white dot, extending from the nose to the eyes, and another small one, white too, stands between the horns, at their base. The males are usually darker and, at times, the pale spot on the scrotum is another distinguishing mark, but the difference is marked especially by the thicker horns.

The bontebock has a livery differing for the colours, basically darker, especially on the sides on the back side of the paws, and the dark dot on the muzzle is interrupted by a dark band, but for the rest it is almost the same as forms and structure.

Both sexes have ringed horns, S-shaped, longer and thicker in the males, and thinner in the females. Both sexes, furthermore, are equipped with odorous glands at the level of the foot of the fore legs and in the pre-orbital region. The blesbock is still nowadays common and not rare or threatened at all. It is found in good quantity in natural parks and private reserves, and, just to give an idea of its abundance, it is on of the cheapest to buy wild animals at those folkloristic wild game auctions or “game auctions” which I would suggest to see, at least one, because they are spectacular.

Many purchase the blesbocks in order to place them in their own farms, also because, being gracious antelopes and with a coloured livery, loving, if not disturbed, open areas and are therefore better visible, they are a decoration for farms differing from the game reserves. 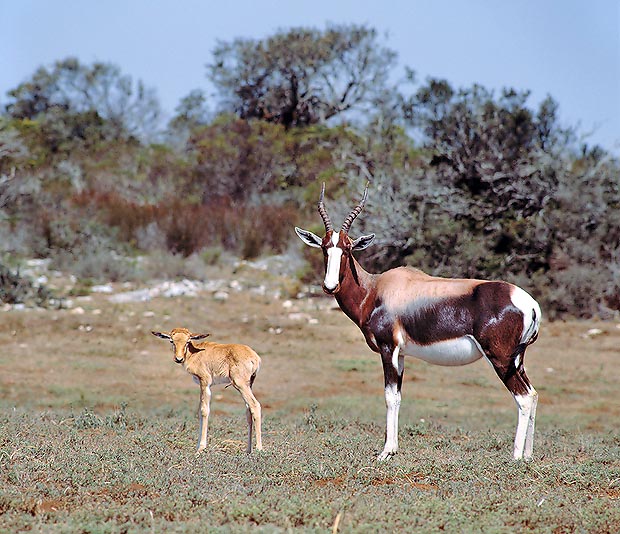 Just as example, where it begins the long trail leading to my dwelling, there is a farm where tropical fruits are cultivated and, while passing over there, it is not rare to sight some blesbocks placidly grazing between the green rounded topped plants of okwatapeyas or avocados.

Furthermore, being “grazers” and not “browsers”, they do not risk causing damages to the plants and they do not even tear off the fruits from the lowers branches.

Among the three species of most frequent “grazers” in the Highveld, the blesbock is the one depending the most on the presence of ponds or other water surfaces and is also that more strictly connected with the presence of prairies, so, whilst, for instance, the springboks, which on the other hand are the most suitable animals the desert, and the white-tailed gnus, herbivores go up to the Karoo, at least when rainfalls are absent, the blesbock never does this.

Moreover, the blesbock is more specialized in the utilization also of grasses which are not loved by the other “grazers”, I mean the grasses the Afrikaners call sourveld (or sour grasses), and for this reason it is in condition to live well also in pasturages where the white-tailed gnus would be starving. This does not mean that also the blesbock, if possible, prefers much more the sweetveld, the sweet prairie, more pleasant to the taste, where is growing, for instance, the Themeda, which is a delicacy for the most gourmets “grazers”.

Even if they love the prairie and the open savannah, the presence of thickets and tall trees is appreciated, as well as source of shade during the warmest hours, and as hiding place and shelter. Like all wild animals, however, they may be, for what the habitat is concerned, even remarkable exceptions and differences of habits and behaviour. 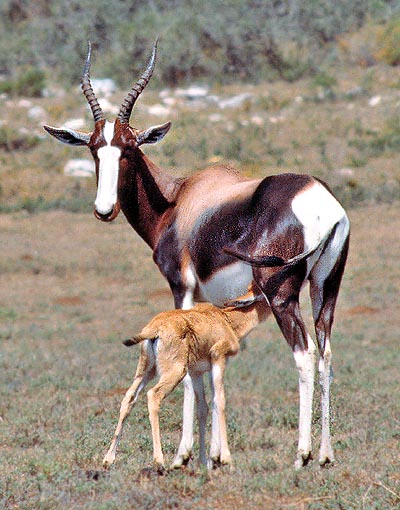 For instance, the survival of the blesbocks is a problem in my area. The great quantity of leopards present renders the life hard to these animals, more than for the impalas, that, in any case, pay a heavy toll to this feline, as they literally decimated being much appreciated and not difficult preys.

This explains why in our reserve they tend often to alternate periods of pasturage in the open prairies with tall grass with periods during which they shelter in the thicker bush or even in the thickets of rainforest.

Even if the blesbocks may undertake migrations between different zones, in the areas where the water is always present, they may be settled and much territorial, whilst the bontebock, which leaves segregated in a restricted coastal range, with plenty of water and humidity, is linked to the territory and is sedentary since thousands of years.

At the time of the great migrations, linked to the more or less great availability of water and of pasture in the different periods, the social organization of the blesbock had to be similar to that of the damaliscus of other parts of Africa, like the Topis (Damaliscus korrigum), but even now, in some areas of South Africa, where it performs small migrations, we may notice aggregations of hundreds of heads.

Where, on the contrary, it is more sedentary and more linked to the territory, the herds tend to be small, as it happens also for the bontebock, on the other hand, tendency easily observable in the Bontebock National Park.

The hours dedicated to the grazing are usually those of the early morning and late afternoon, whilst the central hours, if it’s hot, are spent, if there is an arboreal coverage, inside the thicker vegetation, ruminating and resting.

The territories are marked by the males with a complicated ritual: the animal kneels down on the front paws and rubs the base of the horns on the ground, than stands up, stiff and with rigid steps, advances for some metres, lowers the back and emits a little pile of small balls shaped faeces. This proceedings may be repeated until when the own dominion is delimited. Also the erect posture, stiff, preferably on a termite mound or other hump in the ground, is an expression of possession of the territory and of imposition and intimidation towards possible competitors. The fights, usually ritualized, involve a confrontation of the contenders with “kneeling” and an inter crossing of the horns, on the soil, practically with the muzzles rubbing on the ground. The fights are preceded by intimidating parades (stiff steps, stretched ears, often exhibition of the side, like for increasing the size). 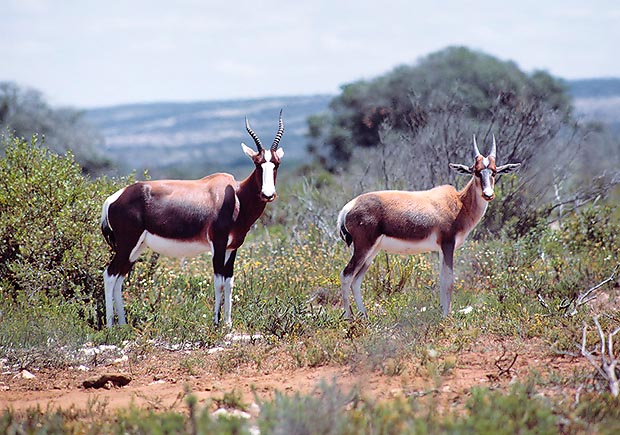 The gestation lasts 8 months and the cubs, already a few minutes after their birth, are able to stand up and to follow the mother; they do not tend to hid or unite like in other species and in this way are much vulnerable in the zones where the leopards are present. Being the jackal the main predator of the newborn, in the most part of the origin areas of the blesbock, following the mother gives good protection, as this canid is not sufficiently powerful to seriously worry an angered mother (and equipped with sharp horns) defending the cub. However, in presence of more determined predators (leopards and hyenas) as it mainly happens where the blesbock has been introduced, the infant mortality rate (and also that of the adult) may get close to levels of genocide.