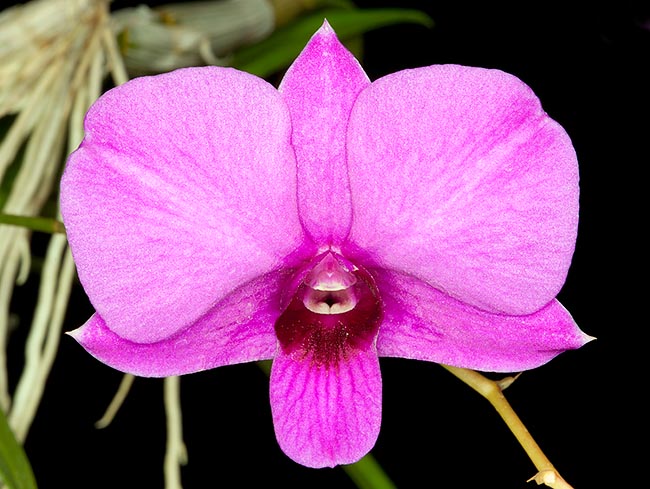 The species is native to Australia (Queensland) and New Guinea, where it lives in the semi-deciduous forests on the branches of the trees or on the rocks up to about 500 m of altitude. The climate is markedly seasonal, rainy during the summer and dry during the winter.

The Dendrobium bigibbum Lindl. (1852) is an epiphytic or lithophytic species with cylindrical pseudobulbs, slightly swollen in the central part, and tapered at the base as well as at the apex, from 15 cm up to about 1 m long with a diameter of 1-1,5 cm and equipped in the second half of a variable number of alternate leaves, distichous, coriaceous, from ovate to lanceolate, 5-15 cm long and 1-3 cm broad. The inflorescences, from 1 to 4 per pseudobulb from the upper nodes, are curved racemes 10-40 cm long carrying up to 20 flowers of 4-7 cm of diameter of a colour varying from lavender to purple with a darker labellum, now and then white; the flowers are long-lasting, about one month. The sepals are oblong with pointed apex, 2-3 cm long, the lateral ones, fused together at the base of the column, form a sort of a spur (mentum), 1-2 cm long, bilobed. The petals are obovate, up to 3 cm long and 2 cm broad, the labellum is trilobed, up to 2,5 cm long and broad, with the central lobe oblong, pubescent at the base, the lateral ones, roundish, surround the column.

There is a form with a very compact posture, previously considered as a variety, the Dendrobium bigibbum var. compactum C.T.White (1941), which grows in the eastern part of Cape York Peninsula (Australia), on the rocks, often in full sun, with short and fusiform pseudobulbs, rather flattened, and lilac-purple flowers.

It reproduces by seed, in vitro, by micropropagation, division and through the young plants which may form on the nodes (currently called “keiki”, which, in Hawaiian means “sons”), and which can be removed when they have formed a good rooting apparatus.

It is a very variable species which, with its hybrids and varieties, stands between the most popular orchids also for the facility of cultivation, suitable therefore also for the beginners. During the vegetative period it requires high temperatures and humidity, partial (50%) shade, abundant and regular waterings, but allowing the compost to dry up completely, during the resting time, in winter, cooler and drier conditions and high luminosity, with minimum temperatures higher than 12 °C, even if it is able to bear some degrees less for a very short period; a constant and good ventilation is essential.

For the waterings and the nebulisations, are to be used rain water, or water obtained by reverse osmosis or demineralised; the fertilizations, duly distributed in order to avoid salts accumulations, are to be done during the vegetative period possibly with hydrosoluble balanced products, with microelements, at half dosage, or less, than what suggested on the package.

It can be mounted on bark, trunks, cork rafts or arborescent ferns roots; otherwise, it can be cultivated in small pots with much draining and aerated compost, which may be formed by medium-sized bark fragments with 30% of perlite. It does not like to be disturbed, therefore the repottings are to be done only when absolutely necessary utilizing pots with a little greater diameter.