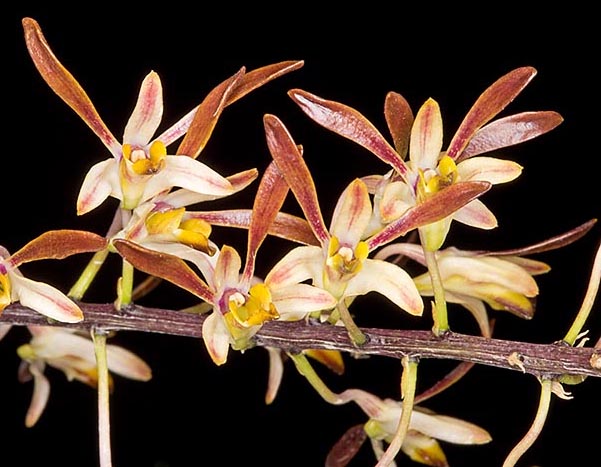 The species is native to Australia (Queensland) and New Guinea where grows as epiphyte mainly on trees of Melaleuca sp. , often in swampy areas and along the water streams, between the 200 and the 600 m of altitude.

The name of the genus is the combination of the Greek substantives “δένδρον” (dendron) = tree and “βίος” (bios) = life, with reference to the numerous species of the genus living on the trees; the species is honoured to the English botanist and explorer William Carron (1821-1876), member of the expedition to Cape York of 1848 and collector for the Botanical Gardens of Sydney.

The Dendrobium carronii Lavarack & P.J.Cribb (1983) is an epiphytic species with 2-5 cm long pseudobulbs, swollen in the median part, carrying 2-4 fleshy, semi-cylindrical leaves with pointed apex, up to 12 cm long and 0,5 cm broad, of green colour with purple hues.

Miniature orchid with scented flowers and of long duration, about three weeks, similar to Dendrobium canaliculatum and with the same exigencies of cultivation. It requires high luminosity, also some hours of direct sun, high temperatures in summer, 25-35 °C, cooler in winter, with lowest night ones not under the 12 °C, and medium-high humidity, 60-70%; fundamental in all seasons is a good and constant ventilation. 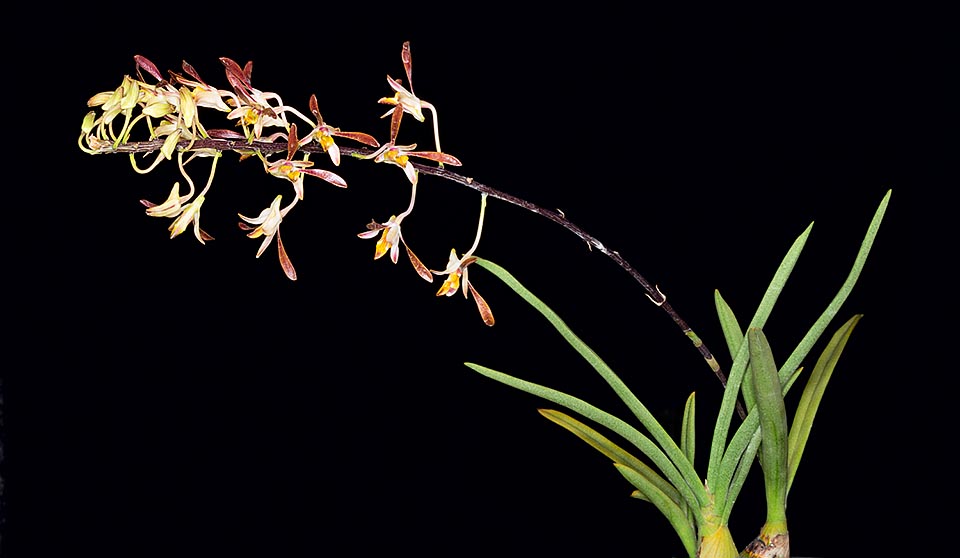 Miniature orchid, grows mainly on trees of the genus Melaleuca. The flowers are perfumed and last 3 weeks © Giuseppe Mazza

The waterings must be regular and abundant during the vegetative period, from late spring to early autumn, practically stopped in autumn-winter, moderate and spaced during the blooming period, from late winter to spring. For the waterings and the nebulisations is to be used rain water, from reverse osmosis or demineralised; the fertilizations, duly distributed in way to avoid salts accumulation, are to be done during the vegetative period preferably with hydrosoluble products with low content of nitrogen, with microelements, at ¼ of the dosage suggested on the package. It can be mounted on bark, trunks, rafts of cork or of arborescent ferns roots, or cultivated in pots of reduced dimensions or baskets with particularly draining and aerated compost, to allow the roots to quickly dry up after each watering, which may be formed by medium-sliced bark and charcoal fragments with possible addition of inerts to improve the drainage. Transplants and repottings are to be done when strictly necessary at the time of the vegetative restart, signalled by the appearance of the new roots.