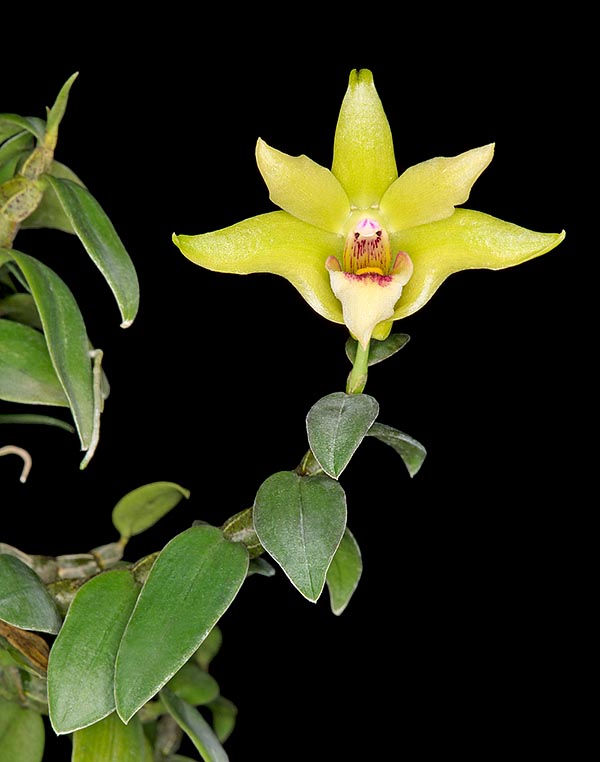 Dendrobium catenatum is famous in China due to the alleged medicinal virtues. From pseudobulbs they get in fact the dendrobine, substance that has made it enter in the red list due to the crazy harvests © G. Mazza

The species is native to China (Anhui, Chongqing, Fujian, Guangdong, Guangxi, Guizhou, Henan, Hong Kong, Hubei, Hunan, Jiangsu, Jiangxi, Kin-Men, Macao, Ma-tsu-Pai-chúan, Shanghai, Sichuan, Yunnan and Zhejiang), Japan, Nansei-shoto Islands and Taiwan where it grows as epiphyte in the mountain forests or as lithophyte on rocks covered by moss up to 1600 m of altitude.

The name of the genus is the combination of the Greek substantives “δένδρον” (dendron) = tree and “βίος” (bios) = life, with reference to the numerous species of the genus living on the trees; the specific name is the Latin adjective “catenatus, a, um” = like a chain, with refrence to the shape of the pseudobulbs.

The Dendrobium catenatum Lindl. (1830) is an epiphytic or lithophytic species very variable with erect or drooping pseudobulbs, 5-40 cm long and of 0,3-0,7 cm of diameter, enlarged at the nodes, provided in the upper part of persistent leaves alternate, distichous, thin, linear-lanceolate with acute or obtuse apex, 3-10 cm long and 0,5-2 cm broad.

Racemose inflorescences from the upper nodes of the pseudobulbs, either lacking or provided of leaves, bearing 2-8 flowers of about 3 cm of diameter of calour varying from white to greenish yellow with purple red spots on the labellum. Oblong-lanceolate dorsal sepal with pointed apex, 1,2-1,8 cm long and about 0,5 cm broad, lateral oblong-lanceolate sepals, 1,2-1,7 cm long and 1,2 cm broad, united at the base of the column to form a sort of a conical spur (mentum) about 0,6 cm long, ovate-lanceolate petals, 1,2-1,6 cm long and about 0,6 cm broad, ovate-lanceolate labellum with entire or just trilobed margin, slightly wavy, 1,3-1,7 cm long and about 1 cm broad. The flowers are long lasting, about two weeks. It reproduces by seed, in vitro, micropropagation and division, to be done by the vegetative restart, with each section provided of at least 3-4 pseudobulbs.

Species famous in China, not so much for its flowers as for its alleged medicinal virtues, requires high luminosity and humidity, 60-75%, and is not particular about the temperature, seen its great distribution area, as it can stand high values in summer and low ones in winter, also close to 0 °C for a short period, but intermediate values, 22-30 °C diurnal and 13-16 °C nocturnal, are to be preferred along with a constant light ventilation. Regular and abundant waterings during the growth of the pseudobulbs, then reduced with possible nebulizations to prevent them from shrinking, utilizing rain water, demineralized or by reverse osmosis. Fertilizations in spring-summer with hydrosoluble products, with microelements, at ½ ¼ of the dosage suggested on the package. Cultivable in pot, with compost formed by medium sliced bark fragments with addition of inerts, like polystyrene, for an optimal drainage and a good circulation of air to the roots, or mounted on branches, bark, cork or arborescent ferns rafts.

The pseudobulbs contain polysaccharides and various alkaloids, among which the dendrobine, and are utilized since remote times in the traditional Chinese medicine, this has caused its drastic reduction in the wild, for this reason it is now extensively cultivated and studies are on the way on the most rapid methods of propagation in order to satisfy the increasing demand.

The species is indicated in the appendix II of the CITES (species whose trade is internationally ruled) and is inserted in the red list of the International Union for Conservation of Nature (IUCN) as “critically endangered”.