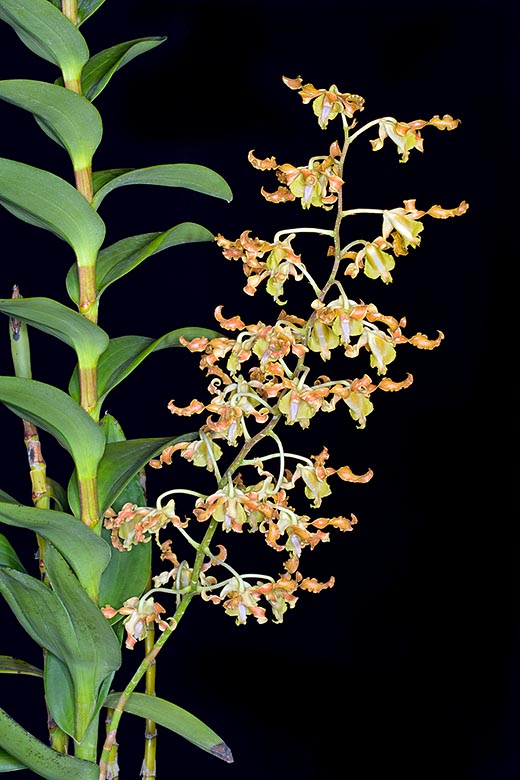 The species is native to Australia (Queensland), Java, Moluccas, New Guinea and Sulawesi where it grows on the trees as well as on the exposed rocks, often along the coasts close to the sea.

The name of the genus is the combination of the Greek substantives “δένδρον” (dendron) = tree and “βίος” (bios) = life, with reference to the numerous species of the genus living on the trees; the name of the species is the Latin adjective “discolor” = multicoloured, with obvious reference.

The Dendrobium discolor Lindl. (1841) is an epiphytic and lithophytic species much variable per size and colour of the flowers, forming wide tufts with cylindrical pseudobulbs, erect, slightly thinned at the apex and at the base, 0,3-2 m, or more, long in nature and 1,5-4 cm of diameter, provided for 2/3 of their length of oblong to elliptic leaves with obtuse apex, 5-15 cm long and 2-5 cm broad, alternate, distichous, coriaceous.

Racemose inflorescences from the upper nodes, 20-70 cm long, erect or arcuate, carrying numerous flowers of 4-7 cm of diameter with oblong-linear sepals and petals twisted and with undulated margin, of variable colour, greenish yellow, golden yellow, yellowish brown or bronze. Sepals and petals of 2,5-3,5 cm of length and about 0,7 cm of breadth, the lateral sepals merged at the base of the column form a sort of spur (mentum) about 1 cm long; trilobed labellum, 1,5-2,5 cm long and 1-1,5 cm broad, run up to the median part by 5 whitish undulated lamellae, with roundish lateral lobes and triangular and curved median lobe.
It reproduces by seed, in vitro, and division, to be done at the vegetative restart, with each section provided of at least 3-4 pseudobulbs. 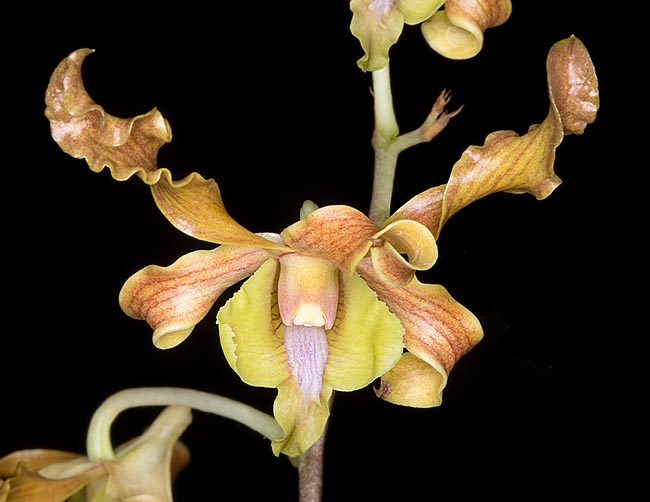 The waterings must be regular and abundant during the whole vegetative period, spaced when the pseudbulbs have stopped growing, with possible nebulisation for avoiding them to wrinkle. For the waterings and nebulisations is to be used rain water, from reverse osmosis or demineralised; the fertilizations, properly distributed in way to avoid salts accumulation, are to be done during the vegetative period preferably with hydrosoluble products, with microelements, at ¼ of the dosage suggested on the package. Preferably, is cultivated in pot with particularly draining and aerated compost, to allow the roots to quickly dry up after each watering, which may be formed by medium sliced fragments of bark and charcoal with possible addition of inerts for improving the drainage. Transplants and repottings are to be done by the vegetative restart, signalled by the appearance of the new roots.
The species is reported in the appendix II of the CITES (species whose trade is internationally ruled).