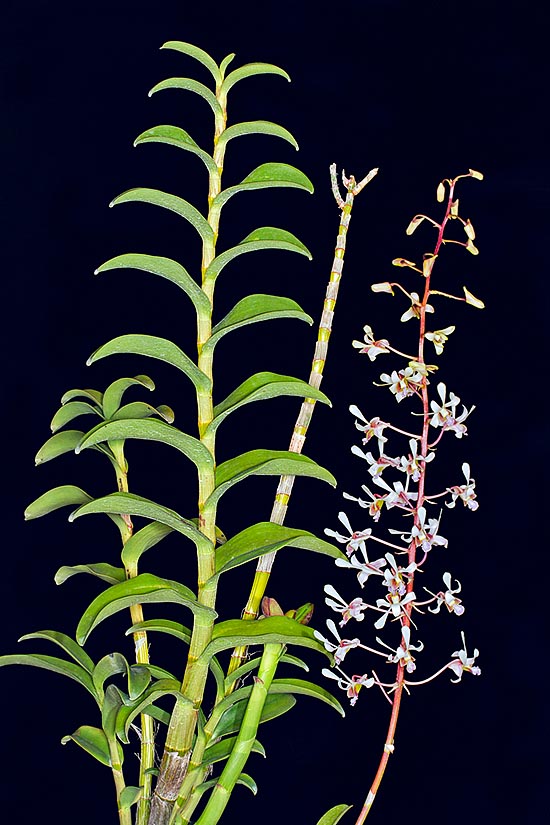 The species is native to New Guinea where it lives in the forests mainly along the coasts and the banks of the water streams, from the sea level up to about 800 m of altitude.

The Dendrobium lineale Rolfe (1889) is an epiphytic or lithophytic species, rather variable for colour of the flowers, with erect cylindrical pseudobulbs thinned towards the apex, usually 0,6-1 m tall, but which, in the old specimens, can reach the 2 m, and of 1,5-3 cm of diameter, with persistent alternate, distichous, oblong-lanceolate, coriaceous, rigid, intense green leaves.

Racemose inflorescences from the upper nodes of the ripe pseudobulbs, erect or curved, up to about 80 cm long, carrying numerous flowers of 4-6 cm of diameter, generally white or shaded of pink, yellow, violet or purple with labellum striated of purple.

Linear sepals with pointed and retroflexed apex, the lateral sepals, merged at the base of the column, form a sort of a spur (mentum) about 1 cm long.

Erect and partially twisted spatulate petals, trilobed labellum with lateral lobes erect on the sides of the column and obovate median lobe with undulated margins and pointed apex.

Floriferous species, quite rare in cultivation, with perfumed long lasting flowers, up to 2 months, requires high luminosity, also some hours of direct sunlight, medium-high temperatures in summer, 22-32 °C, averagely cooler in winter, with minimum ones not below the 15 °C, high humidity, 70-80%, and constant ventilation.
The waterings must be regular and abundant all over it vegetative period, avoiding stagnations at the apex of the new vegetations, particularly sensitive to the rottenness, slightly more spaced in winter till the vegetative restart. For the waterings and nebulisations is to be used rain water, from reverse osmosis or demineralised; the fertilizations, duly distributed in way to avoid salts accumulation, are to be done during the vegetative period preferably with hydrosoluble balanced products, with microelements, at ¼ of the dosage suggested on the package. 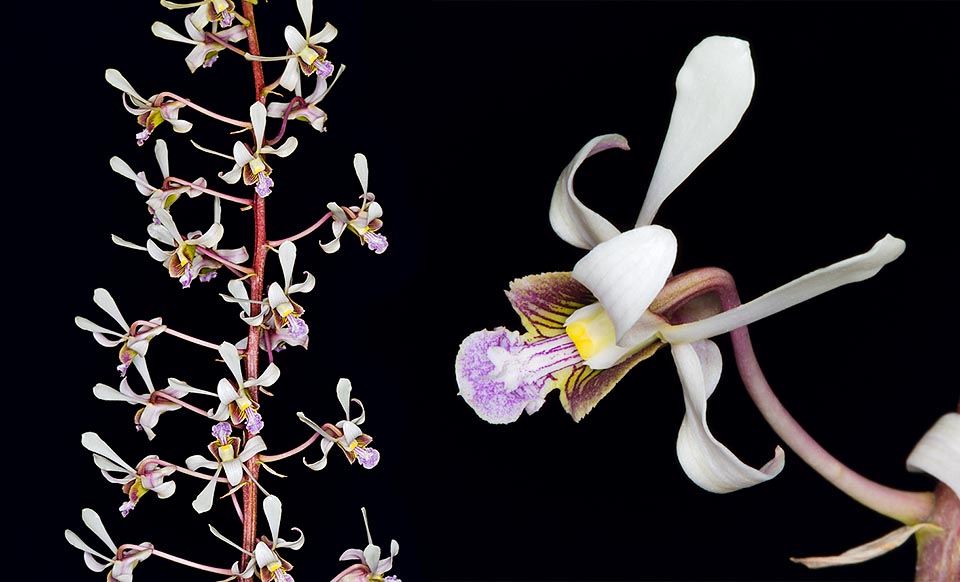 It is preferably cultivated in pots or baskets, seen the dimensions it can reach, with particularly draining and aerated compost, to allow the roots to quickly dry up after each watering, which may be formed by medium sliced bark and charcoal fragments with possible addition of inerts for improving the drainage. Transplants and repottings are to be done when strictly necessary at the vegetative restart, signalled by the appearance of the new roots. The species is reported in the appendix II of the CITES (species whose trade is internationally ruled).