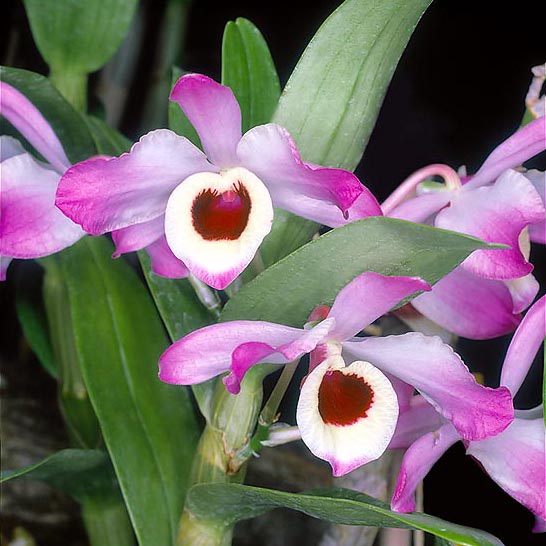 Dendrobium nobile is epiphyte or lithophyte, with 20-70 cm stems and 6-8 cm flowers © Mazza

The species is native to Bangladesh, Bhutan, China (Guangxi, Guizhou, Hainan, Hong Kong, Hubei, Sichuan, Xizang and Yunnan), India, Laos, Myanmar, Nepal, Taiwan, Thailand and Vietnam, where it grows, epiphytic, on the trunks of the trees or as lithophytic on the rocks, between the 500 and the 1700 metres of altitude.

The name of the genus is the combination of the Greek terms “déndron” = tree and “bios” = life, with reference to the numerous species of the genus living on the trees; the name of the species is the Latin term “nobilis, e” = noble.

Inflorescences in winter-spring at the nodes of the two or more years old stems, carrying 1-4 flowers of 6-8 cm of diameter with sepals and petals usually white, more or less nuanced of purple pink at the extremity, and labellum with purple red spot at the centre, perfumed.

It reproduces by seed, in vitro, by micro-propagation, by division and by means of the young plants forming at the nodes which have not carried flowers (in jargon, “keiki”, which, in Hawaiian means “sons”), which may be removed when they have formed a good rooting apparatus; keiki may form also from the nodes of the stems placed horizontally, entire or at portions of about 15 cm, on sphagnum kept constantly humid. With its numerous hybrids and varieties it is perhaps the most popular and the most cultivated since long time among the Dendrobium due to the beauty and the nicety of its long-lasting flowers, 4-6 weeks. 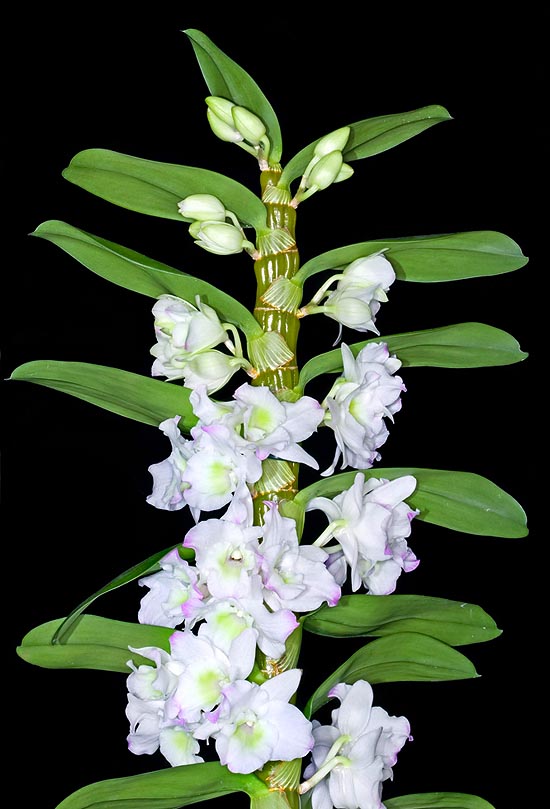 Of easy cultivation provided its minimum requirements are respected, which are coming from the climatic characteristics of the origin countries, in particular a resting period, cool and dry, of 4-8 weeks in autumn-winter, with night temperature around the 10-14 °C, with higher values at the place of the flowers young plants (“keiki”) will form; only some recent hybrids do not need this period for flowering and are consequently easier to cultivate.

In spring-summer, it requires high temperatures and humidity with frequent morning waterings, regular fertilizations till August and a slight shade, in autumn the waterings are to be reduced until to be almost stopped, avoiding, in any case, to get the stems too much wrinkled, placing the plant in a cool and quite luminous, even direct sun for some hours each day, such as a window facing south if it’s cultivated in an apartment, with a good air circulation.

When the flower buds appear, the frequency of the waterings is to be gradually increased and then same are to be resumed regularly when the new roots come out. For the waterings and the nebulisations, are to be utilized rain water, or water obtained by reverse osmosis, or demineralised; the fertilizations, duly distributed in way to avoid salts accumulations, are to be done preferably with hydro-soluble balanced products, with microelements, at half dosage, or less, of what suggested on the package.

It can be mounted on bark, trunks, rafts of cork or of roots of arborescent ferns, or cultivated in small pots with much draining and aerated compost, which can be formed by fragments of bark, of medium size, sphagnum and charcoal. Repottings, transplants and divisions are to be done by the end of the flowering.

The fresh or dried up stems, which contain several alkaloids, among which the most abundant is the dendrobine, are utilized in the traditional Chinese medicine for various pathologies; the dendrobine is also extracted industrially and exported, this has contributed to the rarefying of the species in the wild.