The species is native to New Guinea where it grows as epiphyte at low altitudes, often at the margins of water streams, in areas characterized by seasonal climate.

The name of the genus is the combination of the Greek substantives “δένδρον” (dendron) = tree and “βίος” (bios) = life, with reference to the numerous species of the genus living on the trees; the specific name is the combination of the Greek prefix “ψευδής” (pseudés) =false, and of the name of the species of the Dendrobium calceolum Roxb. (1832).

The Dendrobium pseudocalceolum J.J.Sm. (1907) is an epiphytic species with close drooping stems, ramified, rather thin and flattened laterally, more than 1 m long, provided of leaves, excepting the terminal part that has none, alternate, distichous, equitant (at one face with lamina folded in two along the central vein), lanceolate with acuminate apex, about 5 cm long and 1 cm broad, fleshy. Inflorescences from the apical nodes without leaves with 1-3 flowers, on a pedicel and ovary 0,7 cm long, of about 1 cm of diameter, of white colour with red veins. Ovate dorsal sepal with acute apex, about 4 mm long and 2,5 mm broad, ovate lateral sepals with obtuse apex, about 8 mm long and 4,5 mm broad, united at the base to form a sort of spur (mentum) about 4 mm long, oblong petals with obtuse apex, 4 mm long and 1,5 mm broad, trilobed labellum, 10 mm long and 8 mm broad (spread), with obtuse median lobe, emarginate, with wavy margin, and about 1 mm long column. 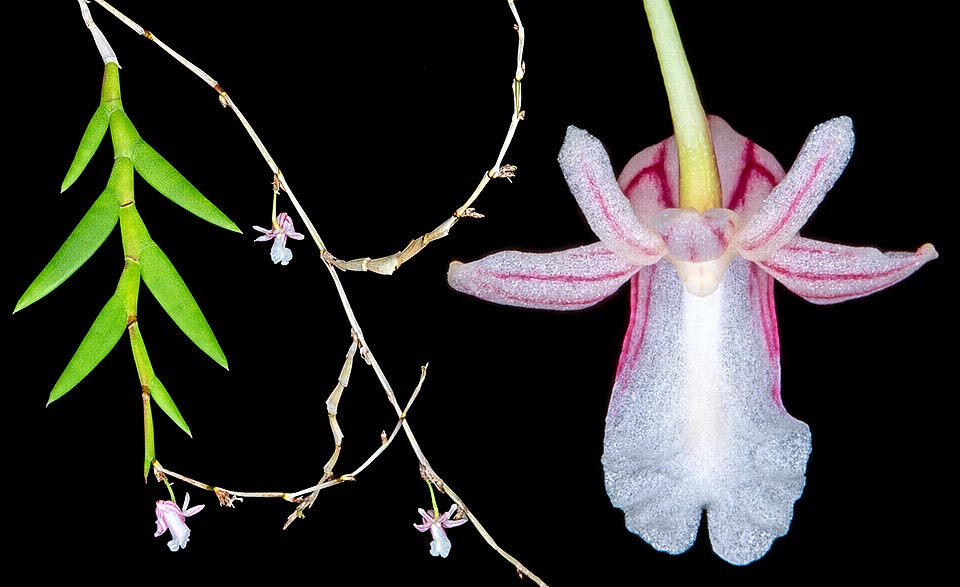 New Guinea epiphyte, rare in cultivation, the Dendrobium pseudocalceolum has thin stems, drooping, even more than 1 m long, with alternate fleshy leaves, distichous, about 5 cm long with lamina folded in two along the central vein. Inflorescences from the apical nodes without leaves with 1-3 modest-sized flowers © Giuseppe Mazza

The blooming occurs more times during the year stimulated by heavy rains after short dry periods.

It reproduces easily by division and through the young plants produced along the stem (in jargon “keiki”, that in Hawaiian means “sons”), that can be taken off and treated as adult plants once they have formed their own rooting apparatus.

Species with tiny flowers rare in cultivation, requires high luminosity, also some hours of direct sun in the morning, medium-high temperatures, 22-32 °C, high and constant atmospheric humidity, 75-85%, with continuous movement of the air, and regular waterings, but allowing the substratum to dry up before giving water again. Due to the drooping posture and the length of the stems is cultivated either on suspended pots, with compost based on medium-sliced bark fragments, or mounted on small logs, pieces of bark or rafts with sphagnum at the base.